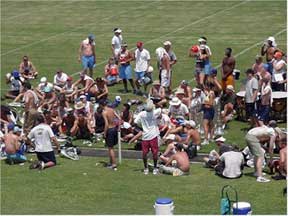 Magic of Orlando rests right after ensemble ended this past Sunday afternoon in the 100-degree heat.
While the front ensemble was off in the shade baffling their brains with music revisions, the rest of the corps marched on through the disgustingly hot temperatures. Thermometers may have been showing temperatures just above 100 degrees, but the heat index must have been at least 130 degrees. Water, juices, Gatorade and fruit were in great abundance to keep members on their feet. The color guard caught up on drill this weekend by learning a numerous amount of sets and trying to add flag work while they ran around the field at 180 bpm. Unfortunately I have yet to be able to watch the guard in the last two camps. Then again, front ensemble kids don't really get to watch much of their show until they see it on video. I always love seeing the show for the first time, even though it's usually three or four weeks into the summer. The heat of this past weekend just made time pass very slowly. Every motion seemed slow to my eyes. I have a lot more respect for the "marching" members in the corps for putting up with the heat for three days, but I got my just desserts Sunday afternoon when it was time to load the truck. It's usually not very fun when you can see the heat rising off your equipment as you're loading it into the truck. But who am I to complain, I got to stand in the shade all weekend. Only one more week before move ins. Just enough time for everyone's sunburns to heal and for me to get rid of my junk food and soda addictions. Scherzo archives Fox, 19, is a junior at Florida State University. He played in the front ensemble of the Tampa Bay Thunder 2000 and 2001, and with the Phantom Regiment 2002, and will play with the Magic of Orlando in 2003. Fox will report back from each spring camp, and continue his reports through the summer. Send him e-mail at friceox@aol.com, or instant message him at friceox.