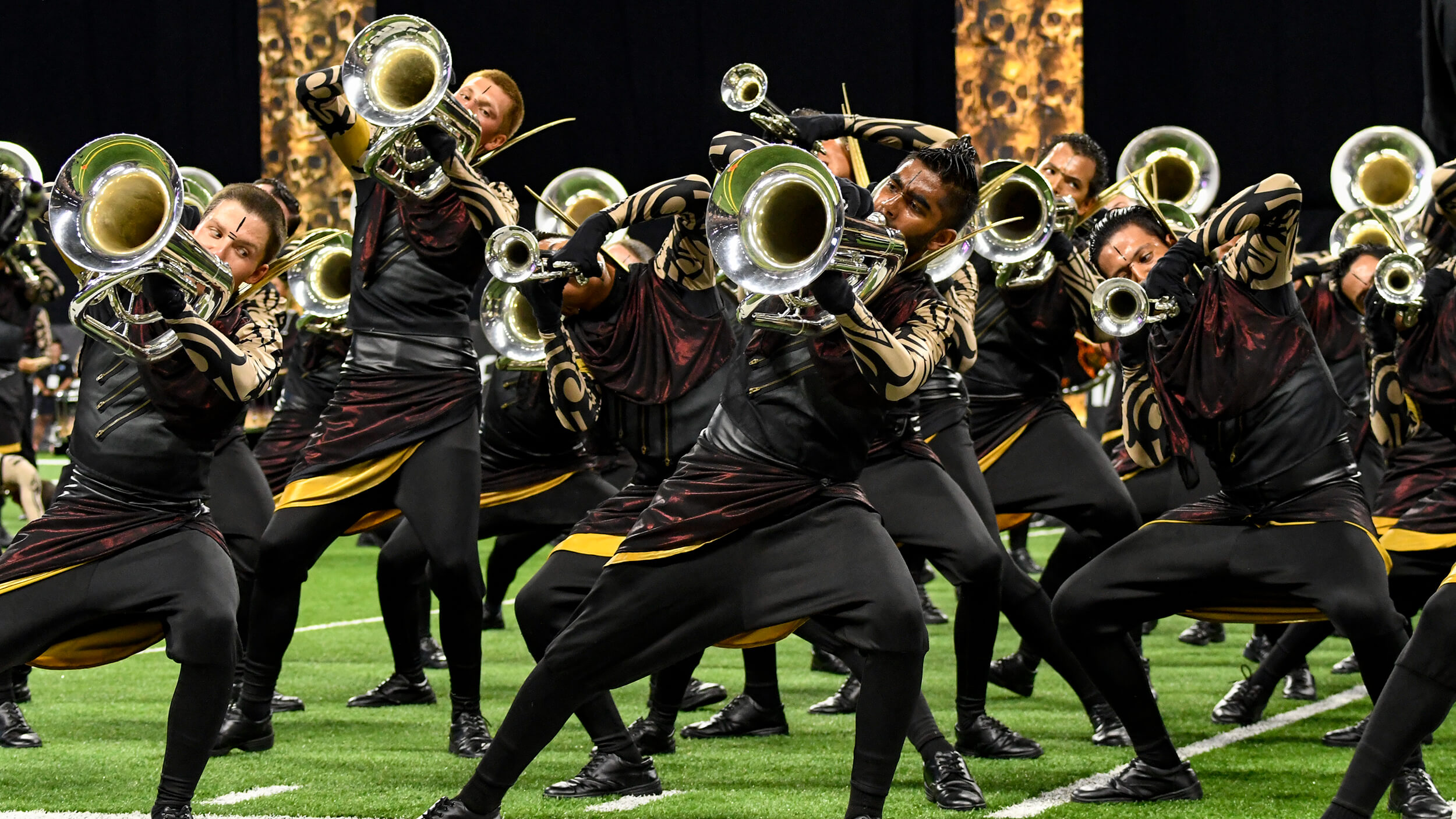 Impress your friends with these factoids about the productions of 2019's DCI World Championship finalists! Then, re-live all of those performances from last August which are now available on Blu-ray or digital download.

Blue Knights – “… I Remember Everything”

Listen closely to the narration at the end of the show and you’ll realize the talk is a metaphor for Blue Knights members feeling like they’ve made it and realizing the drum corps has become their home.

Themed on a rebellious counterculture, Vanguard’s use of a Sousaphone in “Vox Eversio” represented non-conformity within the drum corps activity. Ultimately, all realized they conformed as non-conformists and decided to promote acceptance, heard in the first major tonalities and lush harmonies of the show.

The entire "Ghostlight" production traced the history of the theatre, from the comedy and tragedy masks of ancient Greek theater through the avant-garde of the theater of the absurd; represented by a tap shoe percussion feature.

Phantom Regiment – “I Am Joan” 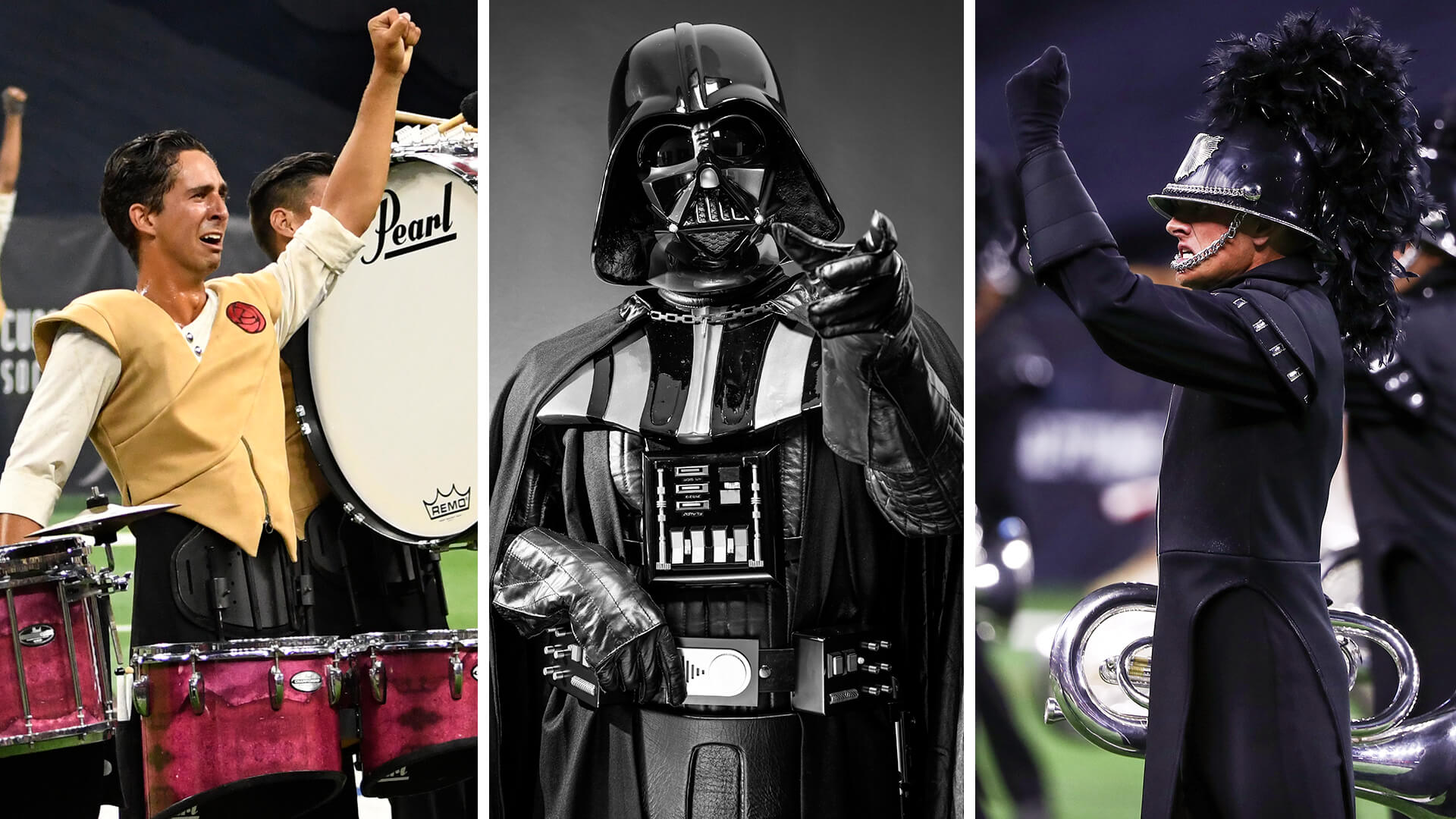 The show’s staff conceptualized the corps’ costuming taking inspiration from “Star Wars,” with the design of the initial black futuristic look stimulated by the uniforms of Darth Vader and the Empire. The staff referred to their tan/white costume change as “the rebel look,” not as refined as the black uniforms due to representing commoners.

Three different weight ratings of bungee cords were utilized on the 16 towers scattered across the field during this production to feature dangling performers. Both cords and accompanying harnesses were inspected every day for wear and tear. Corps members practiced countless hours learning how to jump and push off from the towers and experimented with twisting and being upside-down, but only after staff members were required to develop the techniques and try out each of the stunts first.

The Cavaliers – “The Wrong Side of the Tracks”

With inspiration throughout taken from railroads, including large cylinders representing train track ties and a big, long stage set representing a boxcar stripped of its walls, listen at the very end of the show for aggressive percussion work mimicking a train on the tracks and then the Doppler effect of the horn of a train passing by.

Closing out the opening tune amid powerful brass chords and shredding electric guitar, look for the corps’ formation of the Horns of Odin, a prominent symbol from Norse mythology.

Blue Stars – “Call of the Wild”

With a show title taken from the classic Jack London novel, the Blue Stars performer who comes down the 45-yard line at the production’s start represented sled dog Buck, the central character of the book.

In a clever bit of costume engineering, as the David character sawed the neck of Goliath atop one of the corps’ wall props, Goliath utilized sticks inside his costume that were connected to his shoulder pads, pushing up the shoulder area as his actual head disappeared into the costume. David pulled up on the helmet and red fabric dangled out as if blood, making it look as if Goliath’s head had been severed.

Carolina Crown – “Beneath the Surface”

Inspired by perfection in nature, “Beneath the Surface” reflects on the divine design of natural harmony and balance in nature. As such, look for formations motivated by the Fibonacci spiral, fractals, and the geometric seed and flower of life.

The opening piece to Cadets' “Behold,” “Fanfare for the Women,” was originally written for a single trumpet playing in the large, cavernous University of Minnesota Women’s Sports Pavilion. It was arranged for several trumpets shortly after the 1994 dedication of the hall to re-create the effect of the echo of the original performance.

The underlying orchestral track during the opening cacophony of various Beatles melodies was recorded by the Avon (Indiana) High School Orchestra, directed by Bluecoats’ program coordinator, Dean Westman. Advances in modern technology allowed the corps to create the essence of what The Beatles did in a studio setting.