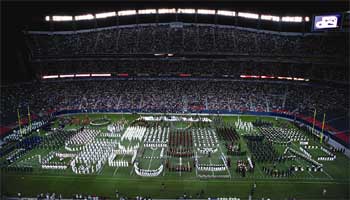 INVESCO Field at Mile High
Wayne Leide, DCI's operations director, said, "There are many ways to measure the success of Drum Corps International in fulfilling its mission. However, the focus often turns to the attendance figures on just that one night in August. It is very gratifying to see trends like 2002 Madison being higher than a very successful 1999 in Madison and 2003 Orlando far exceeding any previous Orlando event. Thus, going into 2004, we had high hopes. World Championships week in Denver went way beyond those expectations." Steve Vickers, longtime publisher of Drum Corps World, noted the recent drum corps success in Madison as being a consistent success. "As chairman of the six DCI World Championships that have been held in Madison since 1985 (1986, 1986, 1987, 1992, 1999, 2002), of course I'm proud of the consistent contribution these events at Camp Randall have made to the overall success of the activity's premier showcase. It's gratifying to know that all of our hard work pays off for not only the fans who enjoy coming to Madison, but for the corps that participate and the governing body of this great youth movement," Vickers said. Vickers also noted the success of DCI programs like Friends of DCI. "It's also encouraging to see the consistent number of fans who continue to support DCI and the championships by attending each year. DCI has developed a small group of reliable stadium situations that fans and corps feel comfortable with and that produce a week of fantastic performances for the 50-plus corps that compete each August," Vickers said. Approximately 5,000 non-paying individuals (corps members, volunteers, corporate partners, etc not participating that evening) also attended DCI events in 2004 during World Championships week. Paid attendance on finals night of World Championships through recent years: 1995, Buffalo: 19,100
1996, Orlando: 13,771
1997, Orlando: 13,773
1998, Orlando: 12,693
1999, Madison: 19,931
2000, College Park: 18,423
2001, Buffalo: 16,406
2002, Madison: 20,230
2003, Orlando: 18,865