A commemorative DVD of the 2005 DCI Classic Countdown, broadcast last night at Regal, United Artists or Edwards Cinemas around the country, is available NOW for $39! "The DVD has all the corps that were on the theater presentation, mixed in 5.1, but with a different mix than in the theater -- mixed philosophically with the same approach as I mix all the current 5.1 DVDs," said Tom Blair, who produced the 2005 Classic Countdown telecast and the DVDs. 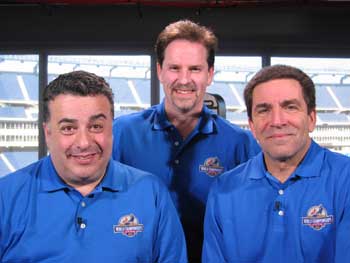 Michael Cesario, Tom Blair and Steve Rondinaro in Foxboro filming for the 2005 DCI Classic Countdown.
Blair said that his task in producing both the theater telecast and the DVD was a two-headed one. "When we went into the studio in March, we did two different, completely separate 5. 1 mixes -- one for the theater, one for the DVD. The theater mix was specifically designed to put more music in the surround channels than I typically do, and the mix for the DVD was done using the same approach that I take with all of the current DCI DVD 5.1 products," Blair said. A question Blair frequently addresses when remixing older drum corps is, How do you make something 5.1 that wasn't 5.1? "With the early corps, we started with the stereo audio that exists on the Legacy masters, and we ran it through a sound processing device that split it up into a multichannel breakdown of that stereo signal. From there, we simply redirected certain signals to the different speakers, as well as created a subwoofer channel using equalization and filtering," Blair said. Also on the disc is a listing of all the corps repertoires, the voting results and the opening movie that started the show in the theater. Finally, "Steve and Michael's introduction of each decades' drum corps is on the DVD, and you can either watch the entire program with their intros or without," Blair said. Corps included on the DVD are: 1974 Kingsmen
1975 Madison Scouts
1976 Blue Devils
1980 Spirit of Atlanta
1980 27th Lancers
1989 Santa Clara Vanguard
1991 Star of Indiana
1992 Velvet Knights
1996 Phantom Regiment
2000 Boston Crusaders
2000 The Cadets
2002 The Cavaliers