The Blue Stars' 2007 program titled "Power and Grace," features the interaction between two of drum corps' most popular emotional experiences. Works by Stravinsky, Tchaikovsky and Saint-Sa?«ns are prevalent and juxtaposed throughout the program to showcase the similarities, differences and potential of "Power and Grace." 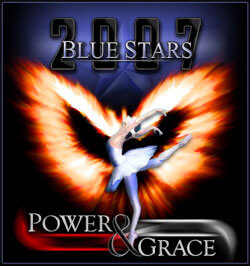 The essence of "Power" and the capability of the drum and bugle corps ensemble to dominate its environment through a display of force, strength and intensity will yield only to the most elegant displays of "Grace" and the beauty and subtlety it implies. Throughout the program, these stark contrasts will be displayed and a common ground will be created as the Blue Stars members supply the energy at both extremes and all points in between "Power and Grace." www.bluestars.org