From a Racine Scouts press release: The Racine Scouts, fondly referred to as the Chrome Domes, will present "Portraits in Chrome; Idols, Icons and Images" in 2007, as part of a year-long celebration commemorating the corps' 80th anniversary. 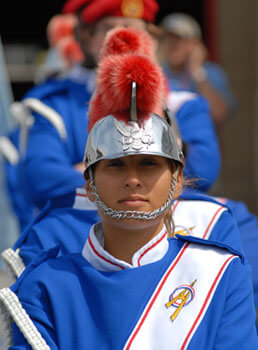 The Racine Scouts take the field at the
2006 DCI World Championships in Madison, Wis.
Since its discovery in the late 18th century, chrome has been used as a durable, yet decorative material, much like the idols, icons and images of 1927. From Charles Lindbergh's historic transcontinental flight, to the masterful collaboration of Ziegfeld, Kern and Hammerstein's immortal "Showboat," to the excitement of the Rockettes, the birth of the Academy Awards, and the intoxicating musical atmosphere of the Cotton Club, 1927 became a defining chapter in the cultural and social awakening of America. Eight decades later, these idols, icons and images are as vibrant and durable as ever, and are a large part of the social and cultural tapestry of American entertainment. Highlights of the corps' production will include the music of Irving Berlin, Jerome Kern and Oscar Hammerstein. www.racinescouts.com