After many long months of waiting, rehearsing, and much anticipation, Drum Corps International's Summer Music Games Tour is now less than two weeks away. The first show of the season on June 16 in Annapolis, Md. will inaugurate the 2007 competitive year and will feature six Division I corps. The Cavaliers, Bluecoats, the Cadets, Carolina Crown, Glassmen and Spirit of JSU will be among the first to debut their shows for the upcoming year. Competitions in Coon Rapids, Minn. and Pleasant Hill, Calif. also will take place that Saturday and will feature a plethora of other drum corps eager to perform. Saturday, June 16 however, is only the beginning to an amazing two month adventure. 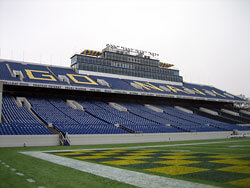 Navy-Marine Corps Stadium will host the
opening day DCI Annapolis event.
"It will be very exciting for us to kickoff the 2007 Summer Music Games Tour in Annapolis," said Drum Corps International Senior Manager of Tour and Special Events Sue Kuehnhold. "We're keyed up to celebrate our 35th anniversary with fans this season as drum corps make their way into Rose Bowl Stadium for this year's World Championships in August." The excitement is undoubtedly growing as drum corps fans across the country approach a day that many have looked forward to since the 2006 World Championships ended in Madison, Wis. last August. Fans, parents, corps alumni, and of course the performers, are all preparing for another incredible summer journey. It will not be long before drum corps fans fill stadiums of all sizes across the nation. "I am so excited for the season to start; I can't wait to see all the drum corps!" said Stephen Urata, a recent "age-out" member of the Santa Clara Vanguard. "It will be nice to finally watch from the stands what I've been doing on the football field for the past four years." With more than 130 drum corps events scheduled this summer featuring outstanding musicians from all over world, this year promises to be something special. Whether this is your first year involved in drum corps, or your eightieth, 2007 will certainly be a year to remember. View all events scheduled for the 2007 Summer Music Games Tour.