From a Troopers press release:

The Troopers hosted their first annual Night with the Stars Celebrity BINGO event on June 9 in Casper, Wyo. Opening with a cocktail hour and live music, event guests were treated to a full dinner buffet, silent auction, small brass and percussion ensemble performances, bingo games and a live auction. 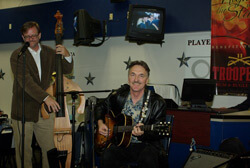 As part of the fundraiser, the Casper Visitors and Convention Bureau pledged $20,000 in financial support to the organization and entered into a joint marketing campaign with the corps. By the end of the night's events, the Troopers had raised more than $100,000. 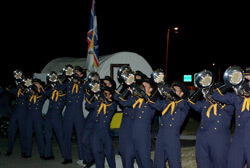 "Tonight marked the return of the Troopers as we revealed the new corps to our fans and the public," said Troopers Executive Director Mike Ottoes. "We wanted to show everyone the fruits of our labor over the past year. The support we received from the state of Wyoming and fans tonight is a great indication of how well everything has been coming together for us."

The event was capped off by a full concert performance from the 2007 Troopers outside the corps' headquarters, Troopers Center. The corps, who unveiled their new logo that night, also wore new uniforms for the 2007 season. The group presenting their full 2007 program titled "Awakenings."

View a photo gallery from the event. (Photos by Pat Chagnon)