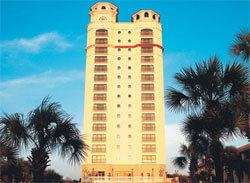 International Plaza Resort; Orlando, Fla.
Some 400 members of the drum corps community, including directors, instructors, tour event partners and others will converge in Orlando at the International Plaza Resort starting Thursday, Jan. 24, for the Drum Corps International Annual Meeting & Conference Weekend. These annual sessions represent the biggest conclave of Drum Corps International community members outside of the competitive season, and are designed specifically to conduct general business as well as to educate, instruct and inform conference participants. While many sessions are designed to integrate and network all in attendance, several distinct tracks will also meet separately. Some of the highlights of those tracks include: World Class Board of Directors Since September, there has been ongoing discussion among directors of restructuring the current board setup to streamline and offer a more effective and efficient structure for decision making. This is one of the many "hot topics" for the DCI Board of Directors as they assemble for their regularly scheduled January meeting. A topic on previous agendas, a streamlined approach to organizational governance moves to the forefront again after extensive consideration and input among all board members and many revisions to a proposal which will ultimately be brought back to the table for discussion starting Thursday. Another main focus for the board of directors during the course of the sessions will be deliberation and voting on the rules proposals which are up for discussion once they garner approval through the instructor caucus sessions and are offered for a vote. The rules voting will take place during the board session on Sunday. Open Class Advisory Committee Gathered under the new "Open Class" banner for 2008, directors of the corps formerly referred to as Divisions II & III, will meet to discuss general business and take part in specific conference sessions on Friday and Saturday. 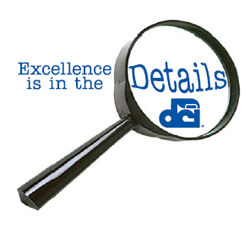 'Excellence is in the Details' is the theme
of this year's conference sessions.
Tour Event Partners Each year, Drum Corps International sanctions more than 115 events as part of the annual DCI Summer Tour. The DCI Tour Event Partners (TEP) are the network of individuals in each host city who handle the logistics and production of their respective DCI sanctioned events. The TEPs will be immersed in a series of networking and developmental sessions on Friday, Saturday and Sunday, designed to further expand their partnership through support and education. Instructors Among some of the featured meetings for corps instructors will be an electronics demonstration featuring students from Tarpon Springs High School (Fla.) and a plenary session titled, "What do you really want to know about DCI and DCI Judging?" Instructors also will take part in several caucus sessions to discuss the 2008 DCI rules proposals. These caucus sessions will determine which of the 10 rules up for discussion will be passed forward to the DCI Board of Directors for a final vote. Medical Summit For the second year in a row, an impressive group of doctors and medical professionals will join together with corps directors and instructors to focus on health and wellness issues related specifically to the unique demands of the drum corps lifestyle and to marching music participants in general. William Dawson, M.D., emeritus professor Northwestern University Medical School and immediate past president of the Performing Arts Medicine Association will deliver a keynote on the director's role in recognizing and preventing medical problems in corps personnel. Other topics for discussion will include: Special Sessions 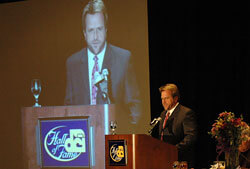 Cadets Director George Hopkins presents
at the 2007 Hall of Fame luncheon.
A capstone of Saturday's sessions will be a banquet luncheon where the DCI Hall of Fame class of 2007 will be recognized. All conference attendees will be invited to take part in celebrating the achievements of the four inductees who include longtime Racine Scouts supporter Howard Dahnert, judge educator Jay Kennedy, arranger and instructor Larry Kerchner, and drum corps publisher Steve Vickers. For the first time at the DCI annual meetings, representatives from the all-age member corps of Drum Corps Associates (DCA) will join with DCA officials to conduct their own January business meeting simultaneously, providing an excellent opportunity for information-sharing and networking. Visit DCI.org for the latest news related to this weekend's meetings and sessions.