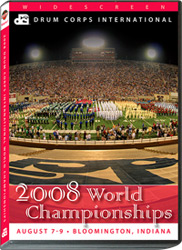 Starting this week, Drum Corps International will begin shipping a newly-edited version of the first volume of its 2008 World Championship DVDs. Additional editing of the production was made necessary because of a change in the copyright status of a piece of music.

The additional editing involves a one minute-14 second segment of the performance of the Phantom Regiment which was seamlessly removed in cooperation with the corps' creative staff.

"While the initial steps of the licensing process were successful, we were disappointed to learn that a synchronization license ultimately wouldn't be granted for one piece of music in our 'Spartacus' program," said Rick Valenzuela, executive director of the Phantom Regiment. "We're still very proud of and pleased that the historical audio/video record of our performance will stand for years to come as a testament to the outstanding achievements of the 2008 corps."

Learn more about what it takes for DCI to stay compliant with music licensing regulations.