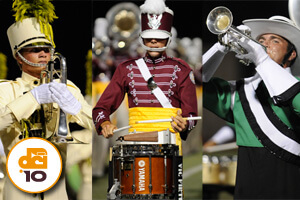 For everyone who can't wait for the summer to begin, (which probably means all of us!), the season opener on Friday, June 18, offers an event unique to the history of the Drum Corps International Tour. On that evening, at 8:03 p.m., three of DCI's top corps will present their 2010 programs at Music in Motion, held in the venerated J. Birney Crum Stadium in Allentown, Pa.

You read the start time correctly! This may be the first DCI show in history having a scheduled start at three minutes past the hour to recognize the trifecta of featured corps. Nicknamed the 3 "C" Double-Play Season Opener playing off the names of the corps—The Cadets, The Cavaliers, Carolina Crown—this event will hold a number of surprises.

Much more than just a competition, the evening will be a three-hour interactive event giving fans in the stands the special opportunity to experience the complete performances of each corps TWICE.

This is one of the very first special-format DCI Tour events since June 17, 2001, when the Cadets and Cavaliers kicked off their seasons in Buffalo, N.Y. to "settle the tie" from the 2000 World Championships. In that show, both corps also performed their programs twice; the audience voting once and the judges giving a score for the other performance. The combined scores established the "Fantasy World Champion."

The 3 "C" Double-Play will expand on a similar format with some new twists before the competition even begins. After the Cadets play the "Star Spangled Banner," the format for the evening will be described and the director from each of the three corps will take the microphone and offer a few words about their corps.

In the spirit of music education, each corps will present a member who has achieved something special outside of their participation in drum corps. Fans have long known that drum corps members are something special, and now representatives from each corps can offer the public an insight into some of the unique characteristics and accomplishments of the students who participate.

After each corps performs for the first time, there will be a Q&A session for the audience to ask questions about each corps' show, directed to several members of each group's management, designers and instructional staff. This is a time for the audience to gain an in-depth understanding of the shows they just witnessed.

After the Q&A session, judges will be relocated to captions other than what they judged the first time, resulting in each corps receiving twice the number of judges' impressions and suggestions. Best of all, this allows the audience, after learning more about the programs, to experience each production with new knowledge and appreciation.

Cadets Assistant Director Justin Heimbecker says that the corps is doing all it can to set the stage for a successful evening. "It's usually difficult to perform the full program once at the first show of the year. The fact that we're asking the performers to go back out and do it again, just an hour or so later, is definitely in our minds as we pace our physical training regimen, our program development, and our dress rehearsal schedules."

The Cadets have opened a Hall of Honored Veterans and each year will add former marching members of the corps who have gone on to serve their country with distinction. Music in Motion will be the first of five Cadets-sponsored shows this season to feature the live inductions, with different veterans honored at each show.

In the belief that more is good and even more is better, the three corps will each perform an encore of one or two tunes. With complete playlists still to be determined, the Cadets are looking at a rendition of Barry Manilow's "Bandstand Boogie" and the patriotic "Battle Hymn," with Carolina Crown leaning toward Rossini's "William Tell" and a Madonna medley.

The Music in Motion season opener promises to provide a distinctive drum corps experience for fans who have patiently endured many months of dreaming about the 2010 season ... Certainly enough to confer a caliber of concentrated cool contentment for the curious corps connoisseur!

Learn more about Music in Motion and purchase tickets.

And if you like what you saw at the season opener in Allentown, hit the road the next night, Saturday, June 19, to see the same event format repeated at Carolina Crown's Tidewater Summer Music Games! This event will be held at Beard Delong Easley Field at Oscar Smith High School in Chesapeake, Va., once again featuring the Cadets, Cavaliers and Carolina Crown.

Then, all 23 of Drum Corps International's World Class corps will make their way back to Allentown's J. Birney Crum Stadium toward the end of the summer for the annual DCI Eastern Classic. Taking place Friday and Saturday, August 6 and 7, the Eastern Classic is the very last Premier Event stop on the 2010 Tour before corps head to Indy for the DCI World Championships.

Learn more about the DCI Eastern Classic and purchase tickets.