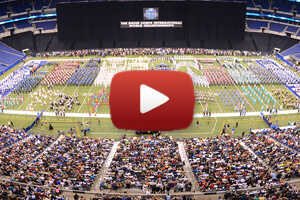 As we near the beginning of January and ceremoniously roll the calendar over for the official start of the New Year, take a look back with us at the incredible performances that made the 2012 DCI World Championship in Indianapolis one of the finest in history.

To start whetting your appetite for what's to come as we look ahead to the summer of 2013, we've assembled the following YouTube video sampler of performance clips that feature DCI's World and Open Class corps as they performed last August at the DCI World Championships.


All of these corps' performances in their entirety are available on DVD and/or Blu-ray disc. Among the most requested items on drum corps fans' wish lists for the 2012 holiday season, be sure to pick up your copies today.