Close to 400 performers took to a new stage Sunday afternoon, July 22, as part of the 2012 World Class Individual & Ensemble Competition (I&E). I&E Event Manager Christina Mavroudis said this year was the first time she had seen all the venues full at Sunset Station in downtown San Antonio, with great interest from corps, parents and drum corps fans. "Everybody is very respectful," she said. "Everybody is having a good time. It's over 100 degrees, so we're kind of thriving in the heat." Among the crowd was Kathy Jurgens, who traveled from Austin with her husband to see her son, a baritone player with Crossmen. "We came today to see our son perform in the solo performance," she said. He competed on bass trombone. 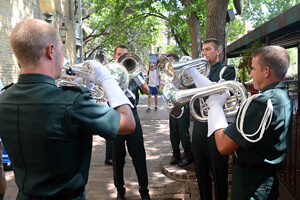 A Madison Scouts ensemble warms up for their performance.
This year saw the return of the Fastest Drummer competition. Last held in 2009, scores are based on playing single strokes for 60 seconds as recorded by a "drumometer." The previous champion was Joseph Manuel, from the 2009 Velvet Knights, who won with 985 hits in one minute. Greg Powers from Seattle Cascades became the 2012 Fastest Drummer with a score of 923. Powers was the last entry of the day, edging out a Santa Clara Vanguard competitor by 12 points. Last year about 300 performers took part in I&E. "It upped the ante," Mavroudis said about the increased participation. "We pushed that 400 mark, which is very exciting. Lots of snares and lots of vocal entries this year." In the first half hour of snare entries was Gaelen Swartz, from Toronto, Canada. Swartz, who is a baritone player for Pioneer, has played snare for about 10 years. "I joined Pioneer at the end of May," he said. "I was looking for a drum corps to march with in my age-out year, and Pioneer had some spots open." 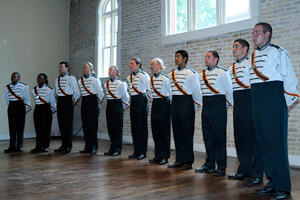 Pioneer's vocal ensemble sings a tune.
Swartz is deaf, and hopes to be an inspiration to deaf performers in drum corps. "I can only listen to the two people besides me," he said. "Anywhere else, I can't hear. It's really hard to be able to listen to the music, march to it and be thinking about 100 other things on the field. It's really difficult." Swartz said besides the two players besides him, he can only rely on the drum major. He last performed at I&E back in 2009, when he marched with Blue Saints. "It went well," he said about his 2012 performance. "It went better than back in 2009. I was more engaged with the audience. I felt like I performed better." He said the best part of his drum solo was his stick tossing — a feature he only decided to add a week ago. Along with Swartz, Pioneer sent two vocal ensembles, including one group of corps members from Africa. "There were a lot of good kids out here today," Mavroudis said. "And a lot of interesting ensembles. I just saw a Blue Stars kids open up on the snare. Serious hand work going on. He was amazing." The Individual & Ensemble Competition for Open Class corps members will take place as part of World Championship festivities on Wednesday, Aug. 8 at the Indiana Convention Center in downtown Indianapolis.