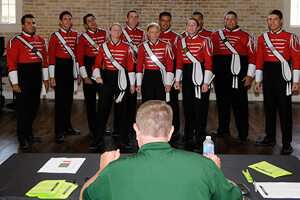 A Boston Crusaders vocal ensemble is judged
at the 2011 Individual & Ensemble Competition.
Approximately 370 World Class corps members are set to perform at the 2012 Drum Corps International Individual & Ensemble Competition (I&E) on Sunday, July 22 at downtown San Antonio's historic Sunset Station. Each year, I&E gives corps members the opportunity to show off their individual and group talents, performing solo and ensemble pieces perfected by corps members outside of their normal corps rehearsal schedules. Even further, vocal and woodwind categories give members whose primary instruments may not be included in a normal drum corps setting the chance to perform. Through 2009, I&E was held annually as part of festivities scheduled during the week of the World Championships each August. In 2010 the event was hosted mid-season following the DCI Southwestern Championship in San Antonio, and in 2011 the event found its current home at Sunset Station. "We're having a resurgence," I&E Event Manager Christina Mavroudis said. "There seems to be a renewed interest and excitement about I&E from both corps and fans alike. I'm looking at it like a new golden age for this event." Listen to an interview with Mavroudis on Wednesday, July 18's Field Pass Tweetcast. (MP3) Last year, Mavroudis said there were about 300 performers from 14 corps who participated in the event. Among the corps missing from 2011's lineup that will have entries in this year's competition are the Cavaliers, Crossmen and Jersey Surf. Of those 370 performers, seven entries will be returning to San Antonio to defend their 2011 I&E titles. • The Academy — Vocal Ensemble • Blue Stars — Brass Ensemble (Trombone) • Blue Devils — Percussion Ensemble • Mandarins — Mixed Ensemble • David Reaver, Blue Devils — Trumpet • Paige Carter, The Academy — Dance • Keelan Tobia, Blue Devils — Snare
Keelan Tobia, 2011 I&E performance 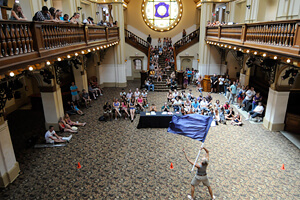 A color guard member performs inside of Sunset Station.
The event will take place this coming Sunday at historic Sunset Station (1174 E. Commerce, San Antonio, TX 78205), located just a few blocks from the Alamodome. The event will begin at 10 a.m. (CT) and run approximately three and a half hours. "What's great about Sunset Station is that most of the performers who are returning will be very familiar with the location," Mavroudis said. "It's convenient and right in the heart of downtown. We're really excited to bring the event back there." I&E will take place the day following the DCI Southwestern Championship at the Alamodome. Many corps treat this as a day off for members, performing in the morning or early afternoon and then having the day off to enjoy the River Walk or take care of laundry. Open Class corps members will once again have their own I&E Competition during the week of the World Championships in Indianapolis, this year on Wednesday, Aug. 8 at the Indiana Convention Center. Learn more information about the 2012 World Class I&E Competition. View a photo gallery from the 2011 I&E Competition. View the complete I&E performance schedule.