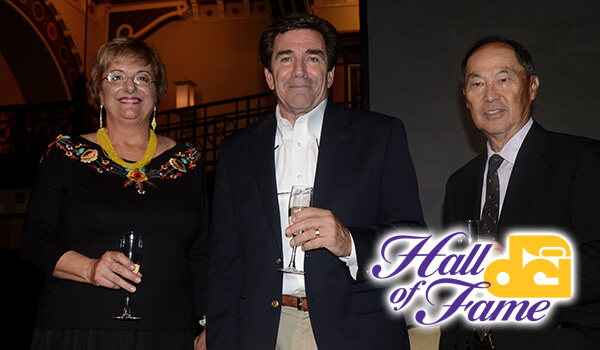 2013 DCI Hall of Fame inductees Marie Czapinski, Steve Rondinaro and Ray Mar.
Last August during World Championships Week in Indianapolis, the newest class of Drum Corps International Hall of Fame members took center stage during a very special kickoff party held in their honor. During the evening celebration, each inductee had the opportunity to address the audience. Here's a look back at highlights from those speeches, including those made by Marie Czapinski, Ray Mar, Steve Rondinaro and in honor of the late Bob Lendman.Marie Czapinski DCI Visual Adjudicator Bob Lendman Phantom Regiment Director 1976-1981 Ray Mar Mandarins Executive Director Steve Rondinaro DCI Broadcast Personality

Help select the DCI Hall of Fame Class of 2014

You can play a part in selecting the individuals who will receive Drum Corps International's most prestigious honor in 2013! Each year you have the special opportunity to be an integral part of the awards process by submitting a letter of support for any individual who you deem worthy of consideration for induction into the DCI Hall of Fame. Each winter, nominations pour in from members of the drum corps community. These letters are collected and reviewed, after which an election is held by current DCI Hall of Fame members and corps directors. By springtime, an all-new DCI Hall of Fame class is announced. A deadline of Saturday, Feb. 15 is quickly approaching for all submissions. Learn more about the DCI Hall of Fame nomination process. View a complete list of the more than 100 DCI Hall of Fame members.