A Blue Devils brass ensemble performs on Georgia Street in downtown Indy.
Taking a break from stadiums and football fields, Drum Corp International hit the streets of downtown Indianapolis on Wednesday, Aug. 6, for the 2014 DCI Performers Showcase presented by System Blue. Kicking off at 10 a.m, more than 250 members from 20 World and Open Class corps met on Georgia Street and at the Indianapolis Artsgarden to compete head-to-head in a number of categories including brass, woodwinds, percussion, visual, vocal and ensembles. "The vocal competition is now one of our fastest growing competitions," said event coordinator Christina Mavroudis. "Today we've had vocal performances from the Madison Scouts, Blue Devils, Blue Stars, and 7th Regiment who actually started the category with an exhibition performance several years ago." 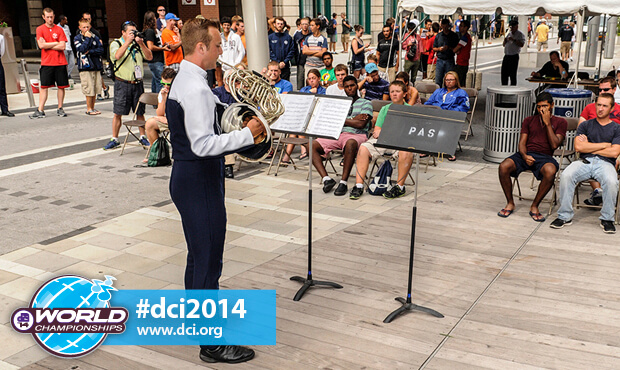 A Blue Stars French horn player competes at the 2014 DCI Performers Showcase.
One of the individual vocalists during today's competition was Troopers euphonium player Victor Cardamone who was happy to have this unique opportunity to show off his singing. "I talked to my director and brass caption head about performing, and when they heard me sing they encouraged me to register," said Cardamone. "As a vocal major, I perform a lot at school, but to do so in this capacity, where DCI encourages vocal performance, it's really been special." Highlights from the day included a thrilling exhibition by the SoundSport team Medellin Grand Banda from Colombia, a beautiful flag ensemble by members of the Madison Scouts color guard, and a harmonica performance by a group that calls itself the Oregon Crusaders "Lights Out" Ensemble. "We started doing this in 2012 just to bug people, but this year people started to like it," said ensemble member Scott Steele. "We'd play at lights out in the gym each Sunday night, just messing around with a fun rhythm, and people would start clapping along." 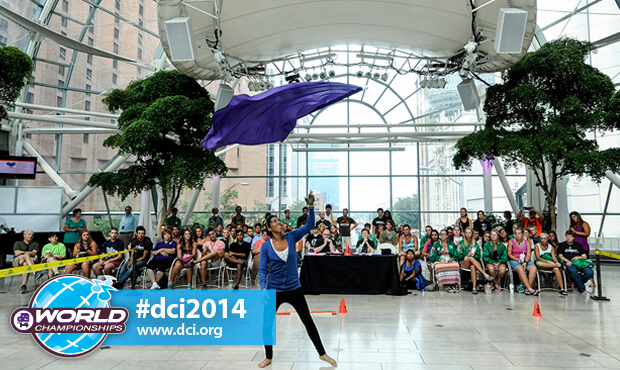 Color guard members showcased their skills at the Indianapolis Artsgarden.
Oregon Crusaders members filled the crowd to cheer on their friends in the ensemble, showing support that percussion judge Jeff Prosperie believes makes a world of difference in boosting confidence within a performer. "Many of the solos are composed by performers themselves, and we evaluate the what and the how. In other words, what are they doing and how well they are doing it," Prosperie said. "It's always a special moment to see the performers' eyes light up when they get a solid reaction from the audience." Learn more about the presenting event sponsor, System Blue.