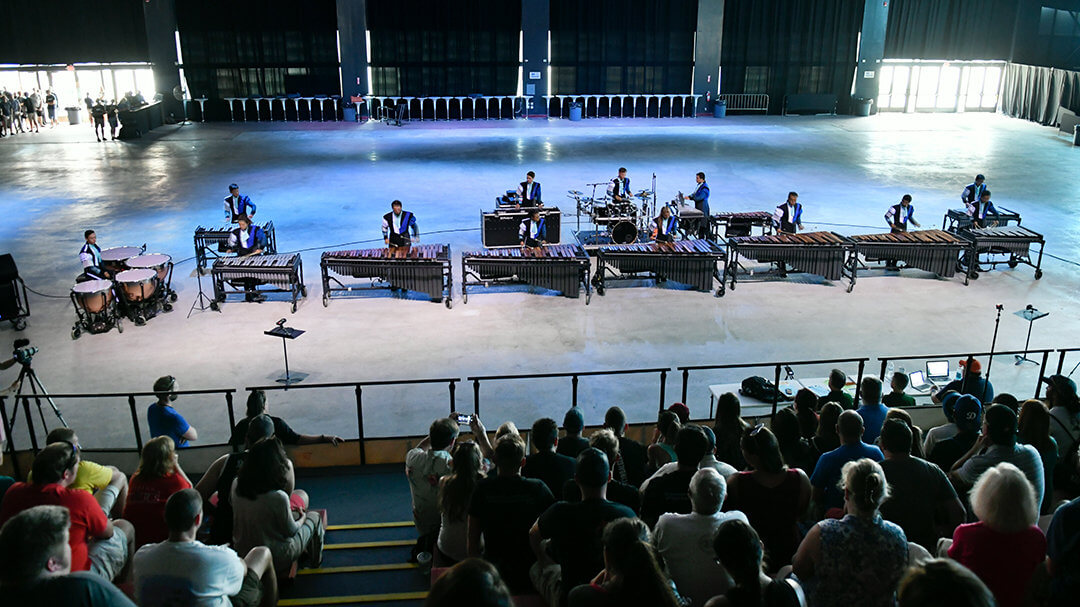 Kicking off just before noon, some 400 corps members met outdoors on Georgia Street and inside the Omni Hotel, the Pavilion at Pan Am Plaza, and the Indianapolis Artsgarden to go head-to-head in a variety of solo and ensemble categories.

This year, 23 World and Open, and even all-age corps and SoundSport teams were represented across 140 entries.

“It’s an excellent opportunity to see performers on an individual basis, because we see them all summer long working with their corps—which is obviously amazing with what they do on the field—but they may not get the chance during their show to do these types of things like play in front of an audience one-on-one,” DCI brass judge Paul McGarr said. “As a judge, I think it’s a wonderful opportunity to meet some of these young, fantastic performers who we have performing here at the DCI World Championships.”

McGarr explained that the premise of judging at the Performers Showcase revolves around the challenging, varietal notation within a piece and how it’s executed from a technical standpoint, but also how well performers handle nerves and express emotion.

Raiders member Brian Starace says that the Performers Showcase provides a great outlet for musicians and is something that anyone can do. While Starace is a baritone horn player with his corps, he performed a saxophone solo on Wednesday.

“It’s really great for people to show how they can express themselves musically as an individual,” Starace said. “A lot of what we do in drum corps is with a large group performing together, so here you can take some time to express your individuality. It’s also really great for people who play other instruments like woodwinds to know that they can participate in this activity.”

“Before I was involved with the registration process, I used to have to race to see individual performances, but now I have the best seat in the house for this awesome competition,” Mavroudis said. “It never ceases to amaze me what these performers can do.”