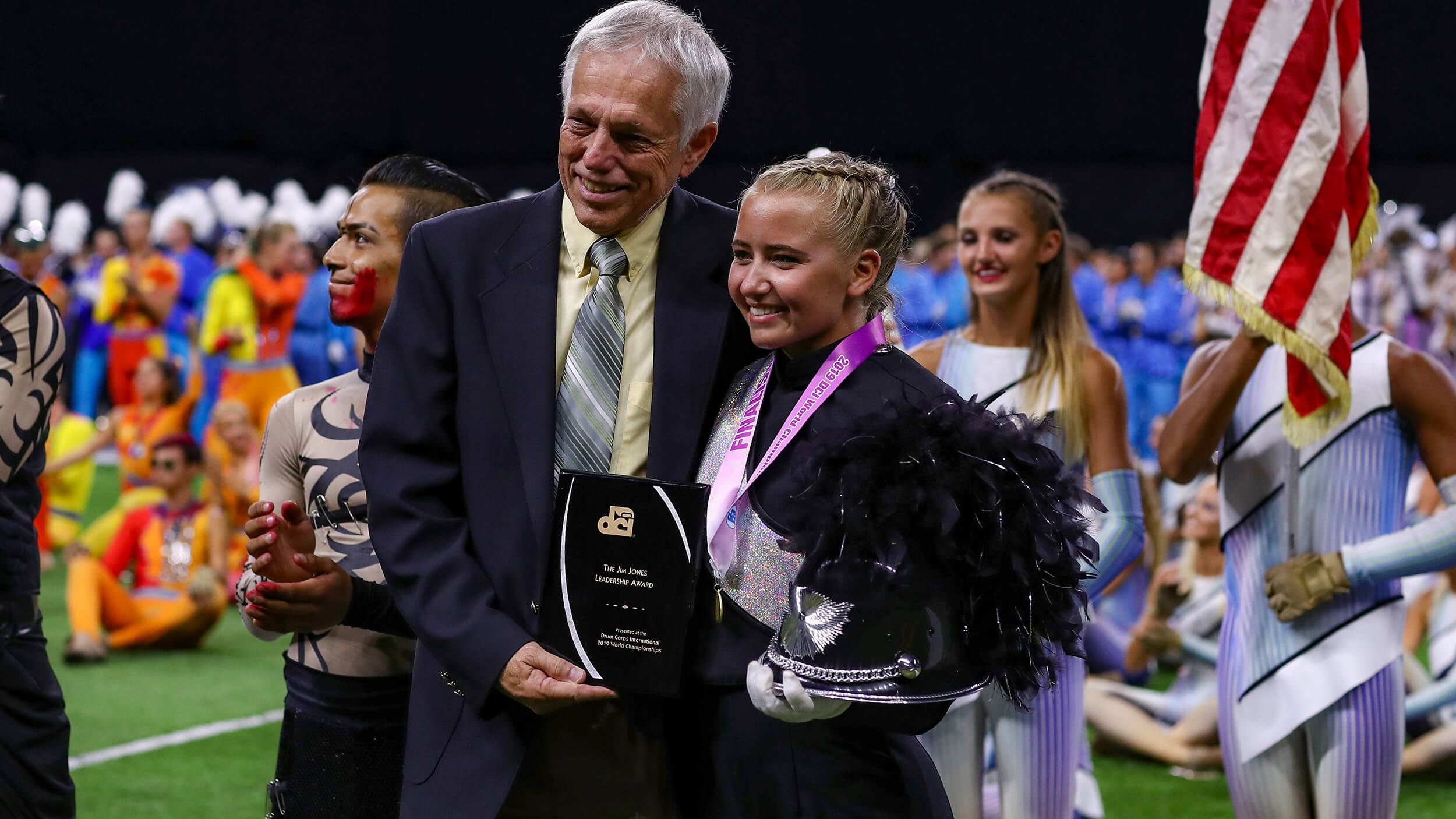 As part of the 2019 DCI World Championships in Indianapolis, more than $24,000 in scholarship awards were presented to World and Open Class performers.

Named for the former director of the Troopers and founding member of Drum Corps International who passed away in 1994, the Jim Jones Leadership award is given each year to one World and one Open Class drum major who exhibits unparalleled leadership qualities.

The Friends of DCI program has been in existence for more than 30 years, and since 2007, generous contributions from its members have allowed for the Friends of DCI Scholarship Program. These scholarships assist with educational funding to help corps members in their return to the classroom after participating in the DCI Tour.

Created by charter members of the Friends of DCI, Ken and Patty Richardson, the Richardson’s Scholarship is awarded each year to two corps members who wish to apply their skills toward a degree in music education.

In memory of the late Fred J. Miller, founder of FJM, Incorporated and longtime supporter of the marching arts, the Fred J. Miller Memorial Music Education Fund Scholarship supports marching arts participants in their pursuit of a degree in music education.

As a drum corps judge for more than three decades, the late Rodney Goodhart contributed greatly toward representing percussion during the early beginnings of DCI. In his memory, the Rodney Goodhart Memorial Scholarship is awarded each summer to a DCI performer.

IN STEP: Women of DCI Scholarship

The IN STEP: Women of DCI program began in January of 2018 to support the participation of women in all facets of DCI and marching music performing arts — from corps members to staff to leadership. The IN STEP scholarship is awarded to a current DCI participating female performer, intern or corps staff member who aspires to continue working within the drum corps activity into the future.

Since its inception in 2007, the DCI-sponsored Marching Music Health, Wellness & Safety Project has succeeded in bringing together health care professionals from varied disciplines to provide medical guidance and hands-on assistance to corps members during the DCI Tour. This scholarship recognizes a DCI performer who aspires to work as a health, wellness or safety practitioner.

The Bonfiglio Foundation is a nonprofit organization founded by the Bonfiglio Family honoring their parents, George and Patsy. One of DCI's founding fathers, George Bonfiglio's love and dedication to the drum corps activity still lives on through the foundation. The annual scholarship awards are presented to deserving individuals who are pursuing careers in education or the performing arts.

Geared toward percussionists, the Double Beat Scholarship aims to help ease the financial commitment of marching in a drum corps.

Created in memory of the legendary drum corps brass arranger and instructor, Jim Ott, this scholarship is awarded to a current drum corps member who is pursuing higher education in the music field and who demonstrates leadership qualities.

The Dutch in DCI Foundation started in 2006 with the goal to support talented young performers from The Netherlands who march in DCI drum corps. Since the first Dutch in DCI in 1980, now almost 200 Dutch citizens have participated in a DCI drum corps, many of whom are now instructors or adjudicators in Europe.

The Performing Arts Initiative for Students of Color (PAISOC) is a nonprofit organization that aims to provide scholarships, leadership training and educational opportunities to students of color currently participating in performing arts activities.

As a marching representative for the Zildjian Cymbal Company, the late Al Moffatt loved marching music for instilling core values in students. This scholarship aims to help students fulfill their dreams of marching in a drum corps.

As a longtime visual judge and former drum corps instructor, the late DCI Hall of Fame member Gary Czapinski contributed greatly to innovation and design since the earliest years of DCI history. This scholarship is presented annually to a corps member who intends to teach drum corps, winter guard, or marching band.

Named in honor of the late DCI Hall of Fame member, The George Zingali Scholarship is presented to the highest-scoring individual competitor in an individual color guard caption (flag, auxiliary or dance) at the DCI Performer’s Showcase.

As an assistant scoutmaster, the late Don Warren began The Cavaliers as a community service project to help the boys of Logan Square Chicago. To honor the roots of this organization and his legacy into the future, the Don Warren Community Service Scholarship recognizes DCI corps members who have exhibited remarkable community service beyond their drum corps involvement.