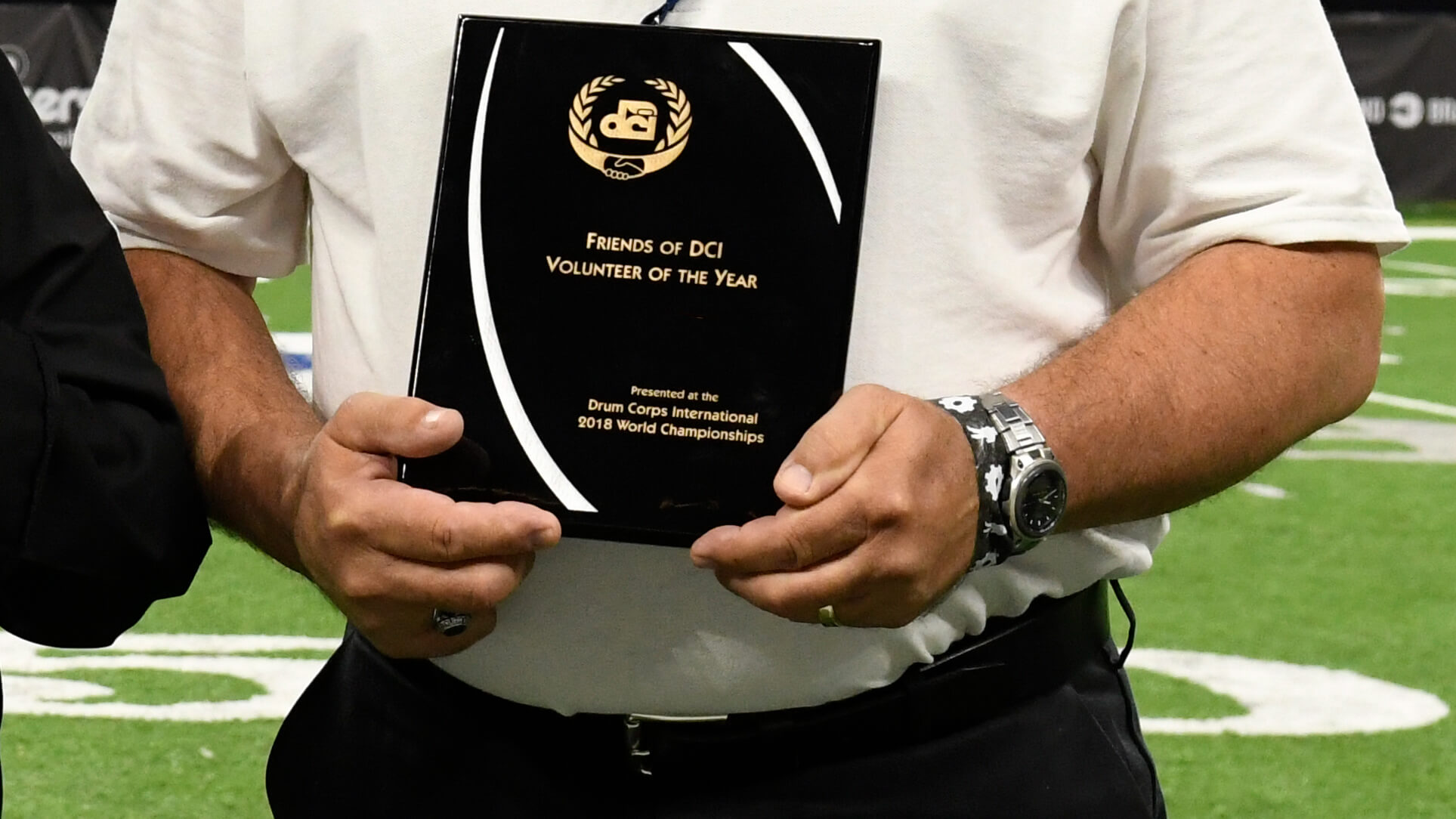 Every summer, under bright stadium lights all across the country, hundreds of thousands of spectators pack together to witness a grandiose scene. They watch the greatest spectacle in marching arts and cheer in awe.

They watch a dramatic and entertaining show unfold before them, gazing at the majestic nature of what a group of young performers are putting together on the field. What most aren’t privy to, however, is how it all comes together, the massive behind-the-scenes undertaking that wouldn’t be possible without a special group of volunteers.

Drum Corps International’s Volunteer of the Year awards highlight some of the most devoted and hardworking individuals in all of Marching Music’s Major League. Those whom without their dedication, the spectacle just wouldn’t shine the same.

Following a selection process administered by Drum Corps International's Friends of DCI program, the 2019 honored recipients will be recognized this August during the DCI World Championship Semifinals in Indianapolis.

Even after his sons finished marching as members of the Blue Knights in the late ‘90s, Ken Adams’ passion for the marching arts kept him around. Regardless of position, he does whatever he can for the corps.

Since his volunteer tenure began in 1996, Adams has evolved into the corps’ renaissance man, moving from the booster club to the board of directors, to the board president where he served for many years. He also serves as the Blue Knights’ recruiting coordinator while organizing and running the corps’ many satellite audition camps across the country.

“From rebranding our organization, strategic planning, being engaged on the national level, and as recruiting director, he has done it all,” executive director Mark Arnold said. “There is no one more deserving of this honor than Ken Adams. Ken has tirelessly supported the drum corps activity since first marching in the Erie Thunderbirds years ago.”

Adams’ passion is unrivaled. Nearly every student who expresses interest in joining the Blue Knights horn line quickly receives a personal call from him, welcoming them to the organization and inviting them to the audition camp.

“This involves hundreds, if not thousands of calls each year,” Arnold said. “Every student who has marched in the Blue Knights horn line for the past 15 years knows Ken, and many will credit him for their success beyond drum corps.”

Every year, John Baumgartner makes the nearly 1,200-mile round-trip drive from his home in northern Illinois to Charleston, West Virginia to serve as the on-site manager for a Phantom Regiment-sponsored DCI Tour event, one of the three shows he’s tasked with overseeing.

He’s up early dropping plywood into place, rolling out temporary fencing, and setting up the parking lots and press box. With a keen eye for detail, he ensures everything a performer or patron could need is taken care of while doling out jobs to many of his fellow volunteers.

“Without him, Phantom Regiment events would not be as successful,” executive director Rick Valenzuela said. “He truly understands the importance of the people: volunteers, ticket buyers, and especially the performers. John’s goal is that every single person enjoys the event from start to end.”

For years, Baumgartner — who has also served on the Phantom Regiment Board of Directors in a few different stints for more than 22 years and counting, has become the heart and soul of countless events with little recognition.

“He continues to be the guy behind the scenes whose name is never announced; never brought forward after the show and he wouldn’t have it any other way,” Valenzuela said. “John has been doing this thankless job for more than 18 years.”

More than a decade ago, The Cadets’ “mother away from home” began her volunteer tenure. Linda Vitale has served as the corps seamstress, uniform consultant and fitter, and fill-in souvenir manager, endearing herself to corps members.

And like any good mom, Vitale is deeply invested in the wellbeing and success of the corps members, wanting the best for each and every one of them.

In the last few years, Vitale has retired, foregoing all her other commitments to be with the corps during its summer season.

“Linda uses her high-level communication skills to make sure that the entire team knows what needs to be done and who is doing what,” Litzenburg said. “That is no small task in a volunteer-run organization that has so many moving people and parts.”