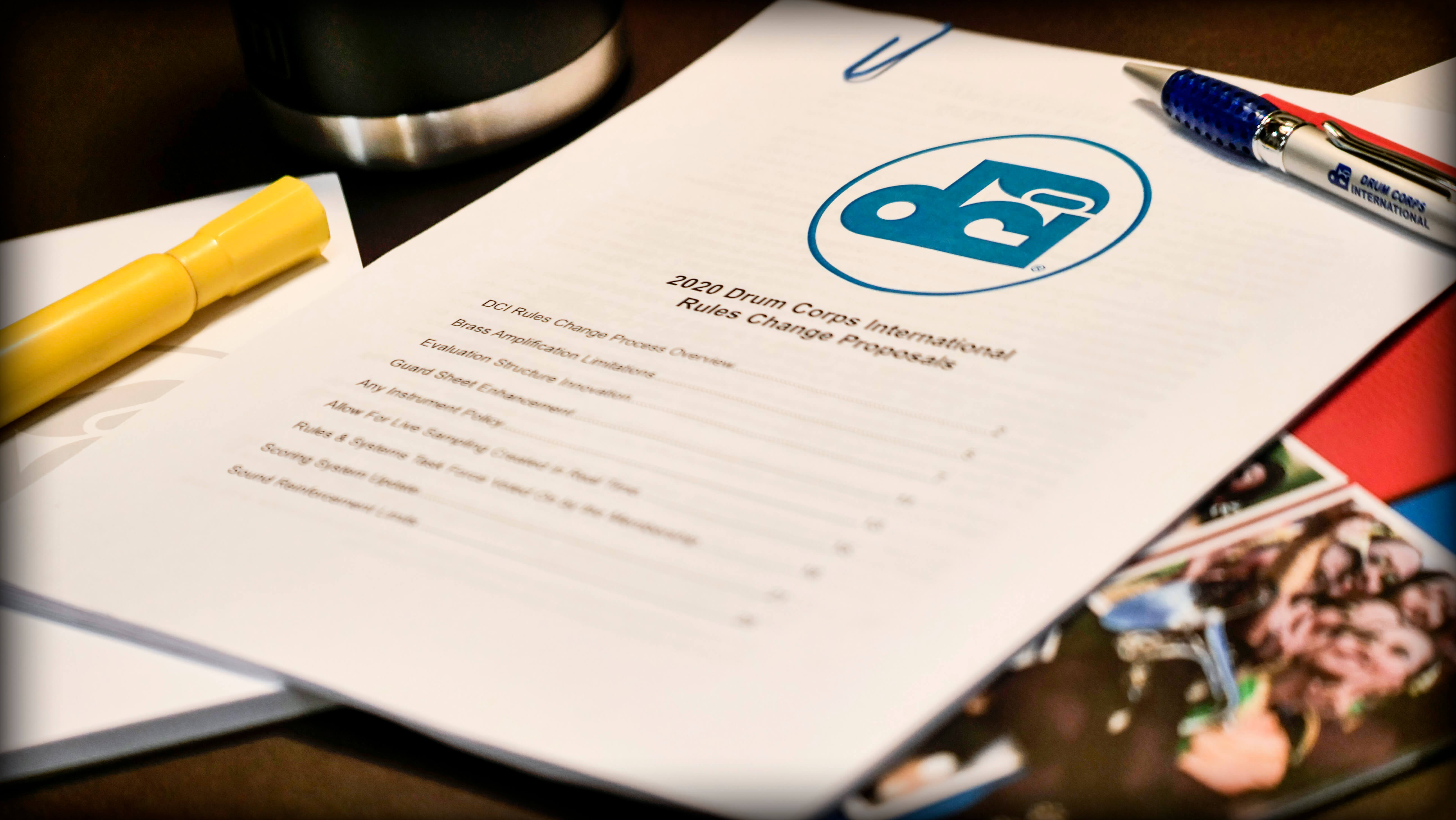 Eight proposed changes to Drum Corps International's rulebook will be up for discussion in January during the annual DCI winter business meetings.

A biennial event, the DCI Rules Congress is a process that is directed primarily by the participating drum corps. During scheduled sessions January 10-11 in Indianapolis, drum corps instructors and designers will meet by caption in individual caucus sessions to discuss the proposals that have been vetted by DCI's Rules and Systems Task Force (RSTF).

VIDEO: How does a DCI rules porposal become a rule?

Instructors from World Class member corps and the previous season's Open Class finalists will be polled to determine whether or not the proposal should be passed along to the full membership to debate, discuss and eventually vote on in the final round of the rules change process.

In addition to the formalized rules process, a number of proposed procedural and administrative changes brought forth by the RSTF, which is made up of corps-affiliated representatives from the instructional community and members of the judge leadership team, may also be discussed and considered in both individual instructor caucus sessions and by representatives of DCI's member organizations.

Proposed by: Michael Martin, The Cavaliers

Summary: Previously proposed under the same title in 2018 and ultimately not making it out of the instructor caucus sessions for a vote, this new proposal does not call for limits on the number of soloists who can be amplified at any one time, rather looks to prohibit the use of short-range microphones to reinforce the entire musical ensemble.

On the record: “The drum corps brass fan is savvy and perceptive. The difference in fidelity between an acoustic tuttie brass moment and an amplified or electronically-reinforced tutti brass moment is noticeable to the average DCI show-goer, and certainly to the avid fan. What has always made this activity unique is the power and precision of the well-taught brass section. This maintains the integrity of that aspect of our activity.”

On the record: “We propose to introduce new layers within the evaluation and feedback system, so as to better maximize fan engagement, the dosage of information provided to corps and adjudicators, and the quality of adjudicator feedback.”

Proposed by: Denise Bonfiglio, The Cadets

Summary: This proposal would shift the judging criteria on the color guard adjudication sheets away from “exclusive skills” to a mix of “skills and big picture.”

On the record: “DCI has a very small pool of judges that are expert at evaluating skills. Opening the sheet up to include the big picture would make the sheet more accessible to a larger segment of the judging community.”

Proposed by: Kathy Black, DCI Board of Directors

Summary: This proposal would allow the use of any instrument, including woodwinds, effective for the 2021 season.

On the record: “Opening the drum corps activity to young musicians currently excluded is consistent with the DCI mission to bring the life-enriching benefits and enjoyment of marching music performing arts to more people worldwide.”

Summary: This proposal would allow rhythmic effects such as delay and live looping to be used by corps in performances. Not intended to legalize pre-recorded or sequenced music, this proposal aims for performers to use the stated effects on instruments being played in real time.

On the record: “If our goal is to train performers to have a future in music performance, using delay effects and live looping are educating our students more accurately than the current time-consuming system of having an electronics designer ‘approximate’ those effects.”

Rules and Systems Task Force Voted On by the Membership

Proposed by: Lindsey Vento, The Academy

Summary: DCI’s Rules and Systems Task Force, which is made up of a group of corps-affiliated representatives from the instructional community and members of the judge leadership team, helps determine and guide the ongoing process of how drum corps are adjudicated and provides direction to the artistic standards related to rules and systems. Currently these individuals are appointed by the DCI artistic director who serves as the chair of the committee. This proposal would shift the selection of the committee into the hands of DCI’s voting member corps every three years.

On the record: “Anything we can do to potentially spread the voice and representation across more organizations, allowing feedback and discussion to occur with various backgrounds and differing organizational makeups, can only benefit the students/members.”

On the record: “When the current judging system was devised, the speed and velocity of movement on the field was considerably less and more predictable. There were few props, if any. We have adjusted through the past decade as designers became more creative, however, we have now moved to a level of presenting through the interdisciplinary arts that is setting new standards for outdoor production and the evaluation system should be updated to properly reward the efforts being presented.”

Proposed by: Steve Vento, The Academy

Summary: This proposal would create sound reinforcement decibel limits based on the size of the venue.

On the record: “This will ensure a more enjoyable experience to the fan … This will also ensure a better listening environment under the statutes of health and wellness. There is no need to go over 110 decibels.”

Read the proposals in their entirety