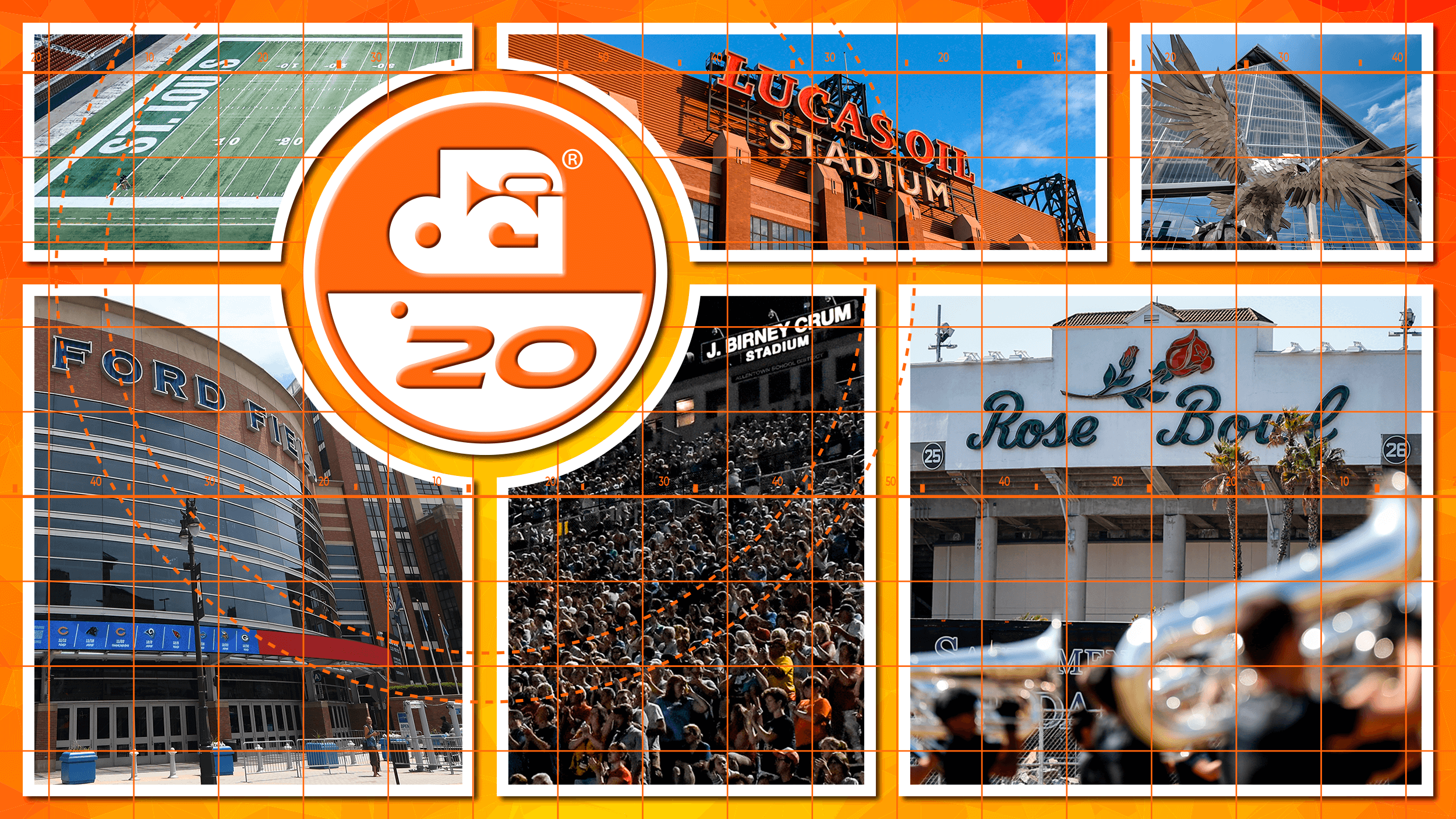 The 52-day 2020 DCI Tour will kick off June 18 in Detroit. Photo by: Drum Corps International

With an unforgettable and transformative decade about to be in the rearview, the forward focus is 2020.

The upcoming Drum Corps International Tour will look relatively similar to seasons past, with a handful of new additions and tweaks to a familiar format.

Showcasing the high-energy musical and visual masterpieces of Marching Music’s Major League™ from coast-to-coast, this summer will feature more than 100 competitive events over the course of 52 days, from the DCI Tour Premiere in Detroit on Thursday, June 18, all the way through the DCI World Championship Finals in Indianapolis on Saturday, August 8. 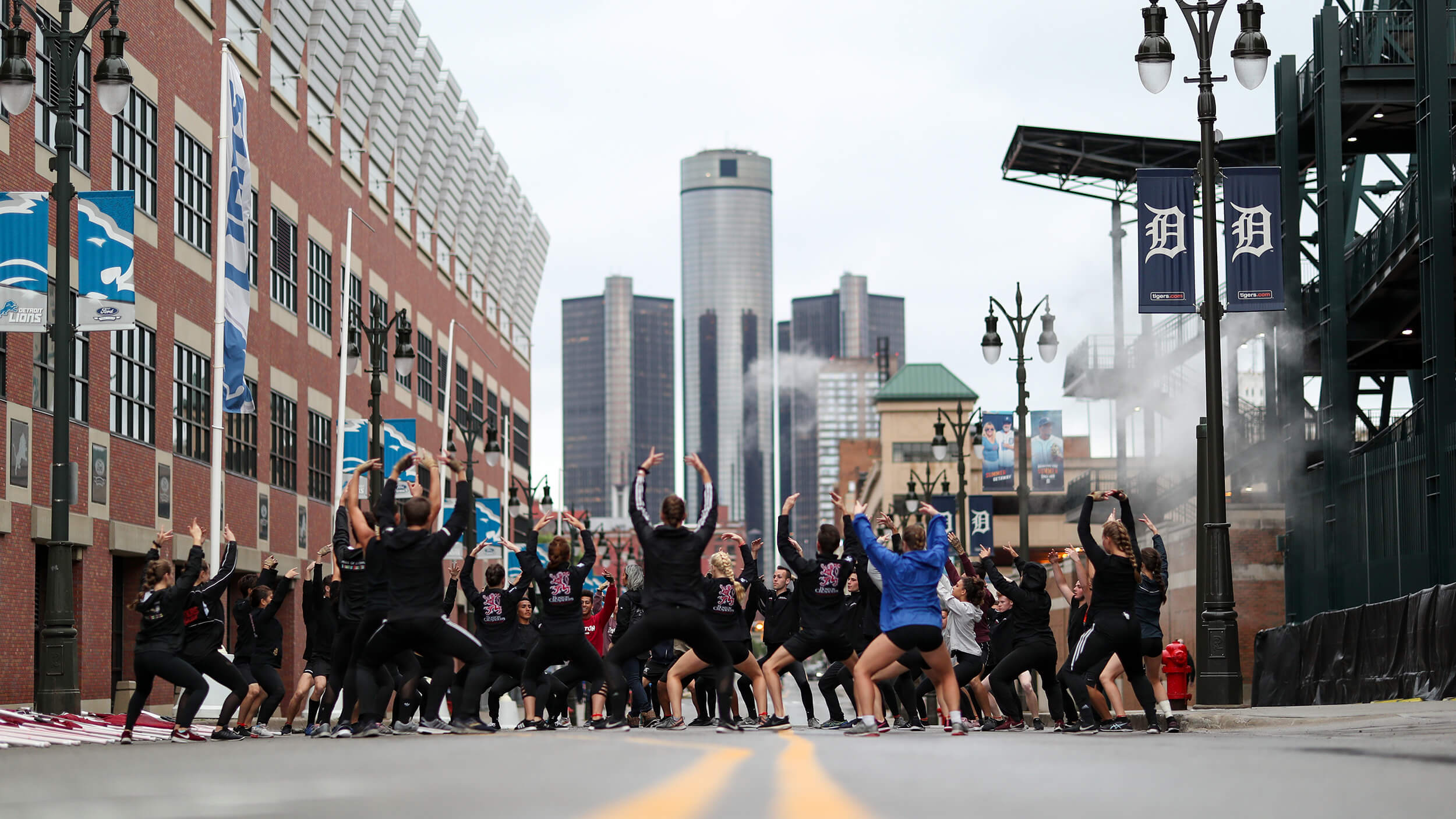 The season-opening DCI Tour Premiere pres. by DeMoulin Bros. & Co. will be back at Ford Field in Detroit for the third consecutive season. Six of 2019’s finalists will be on hand to get things started at an event that will also be broadcast live to movie theaters across the U.S. The lineup is set to include the Bluecoats, Boston Crusaders, Cavaliers, Blue Stars and Carolina Crown. New to this year’s mix is the Crossmen who will be making their Motor City debut.

The day following 2020’s premiere, the DCI Tour will once again feature a series of West Coast events in the Bay Area, as several of DCI’s California and western-state ensembles compete in Clovis, California on Friday, June 19 before making their way to the popular DCI West event in Stanford.

The month of June, in general, will look almost identical to 2019’s iteration, featuring a number of key events in familiar venues like Pasadena’s Rose Bowl Stadium and Muncie, Indiana’s Ball State University. 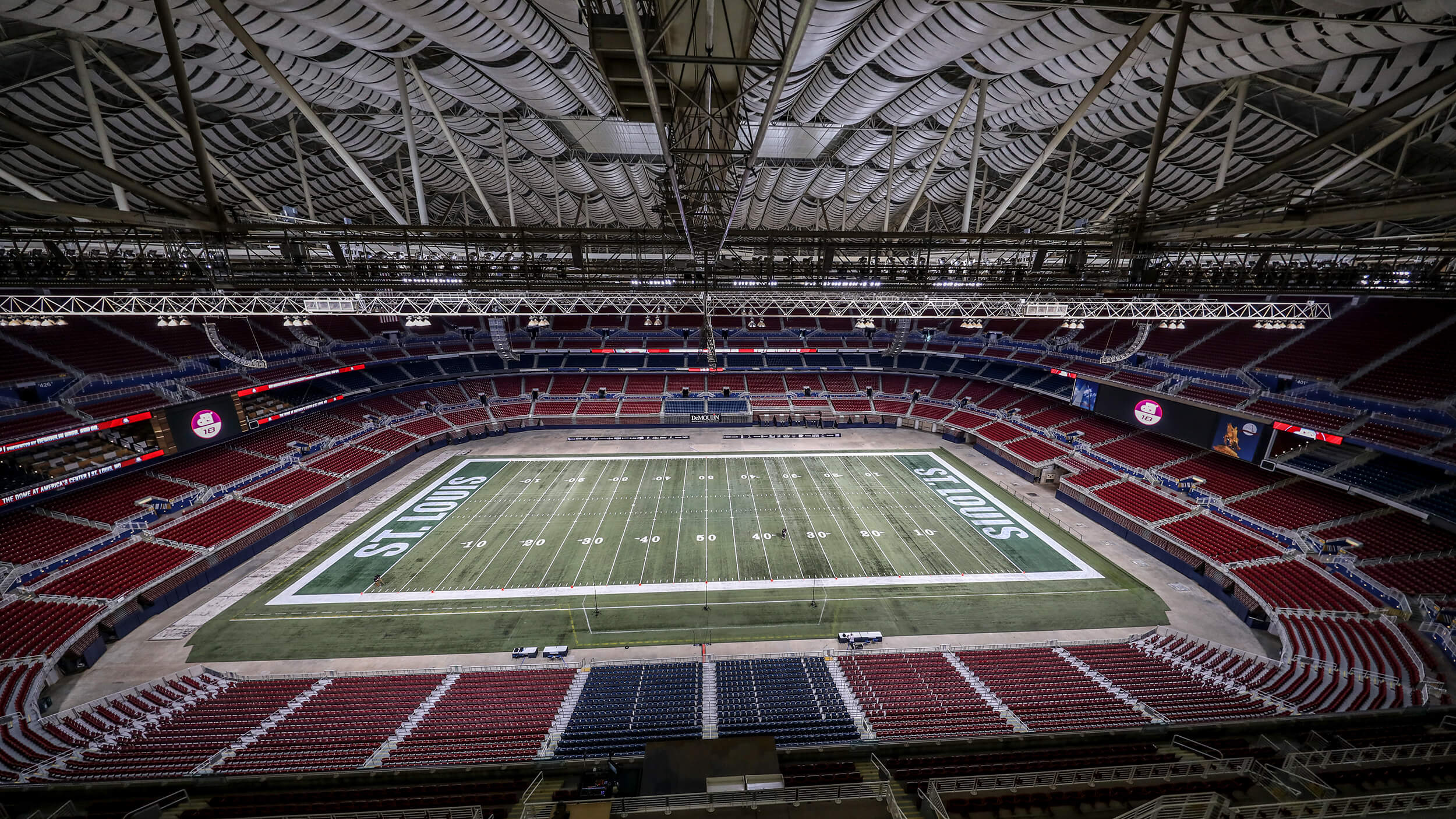 The always-anticipated July weekends will have a bit of a different look this season, and are largely the main form of change along the 2020 tour. Starting on July 5, last season’s DCI Menomonie event, held at the University of Wisconsin-Stout, will take place this year at the University of Wisconsin-La Crosse which is a venue that’s been a familiar stop for DCI Tour events in recent years.

The following Sunday, July 12, while a lineup of corps compete at Mile High in Denver, the first “regional” of the season will take place at The Dome at America’s Center in St. Louis. The DCI Midwestern Championship pres. by DeMoulin Bros. & Co. was first introduced to St. Louis in 2018, and will return this summer after a short hiatus.

Often considered the turning point of the DCI season, the “Texas Tour” got a noticeable makeover for 2020. Due to a scheduling conflict with the Alamodome, the annual DCI Southwestern Championship pres. by Fred J. Miller, Inc. will be split between two venues in San Antonio (Judson HS) and Corpus Christi (Calallen HS) on Saturday, July 18.

While shows in Denton (July 16), Katy (July 17) and Mesquite (July 20) make their returns to DCI’s swing through the Lone Star State, venues in Austin (July 16) and McKinney (July 21) add even more depth to a pivotal series.

Wrapping up the month of July, the DCI Southeastern Championship pres. by Stanbury Uniforms in Atlanta will be held at the Peach State’s iconic venue, Mercedes-Benz Stadium, for the third year in a row. Due to this year’s alterations to the Texas schedule, the Atlanta event will be the only opportunity prior to the DCI World Championships to see every single World Class corps in one place on the same day.

That said, all 22 corps will roll through Allentown, Pennsylvania and J. Birney Crum Stadium once again for the DCI Eastern Classic, split across two nights — Friday, July 31 and Saturday, August 1 — as usual.

In the days between these weekend headliner competitions, dozens of other events will take place throughout the country, serving as “dot connectors” for ensembles as they criss-cross the country between each major stop on the tour.

“We’re continuing our focus on increased safety and improving the overall quality of experience for performers, fans and volunteers across the tour,” DCI senior director of event development Sue Kuehnhold said. “The designers and instructional teams of the participating ensembles work tirelessly to extend the creative boundaries of the remarkable performances of those in their charge. Our job is to make sure that the efficiency of the tour and the competitive performance environment provides them with every opportunity to continue to set the standard for excellence in the marching arts.” 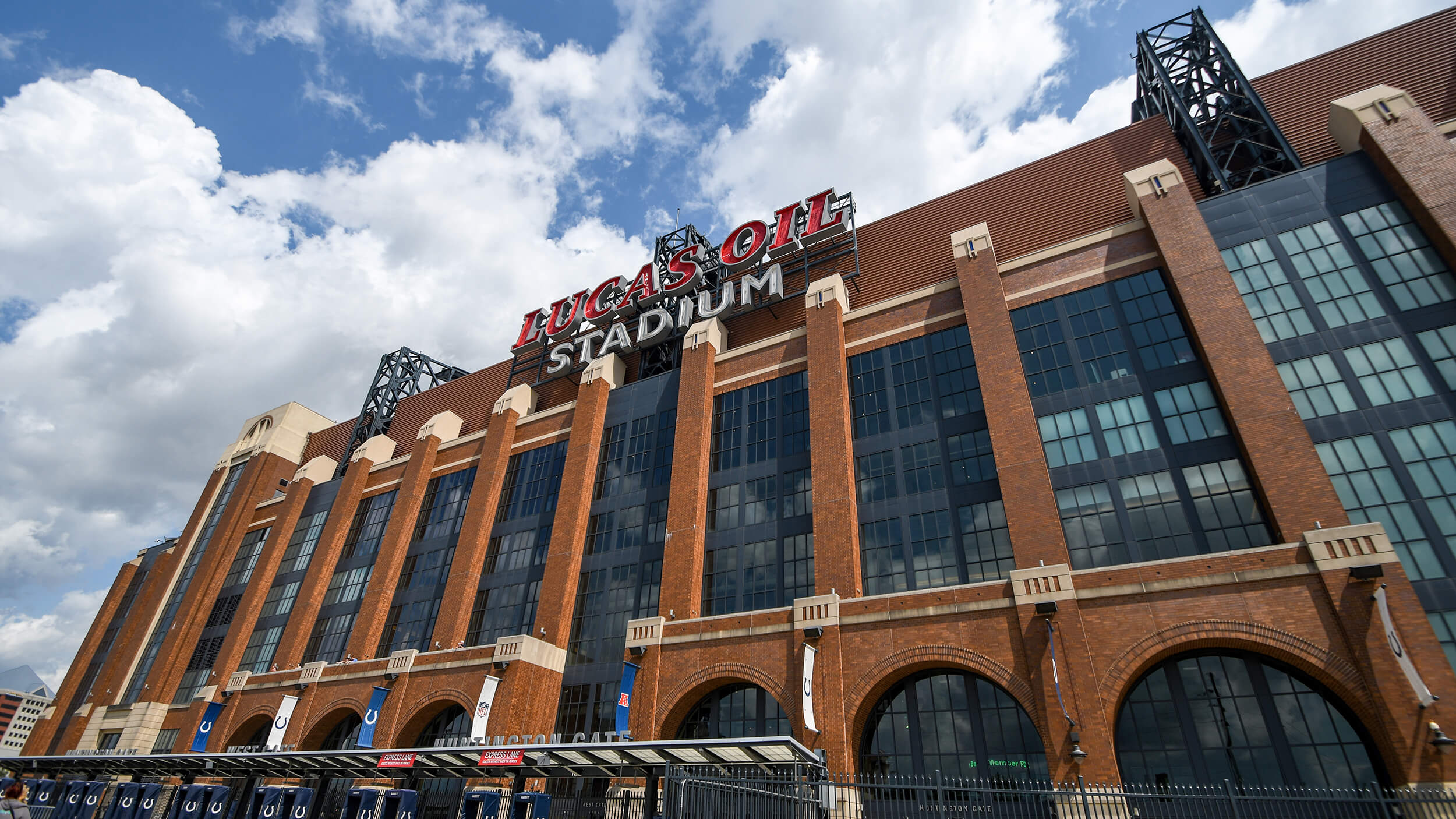 2020 will make a dozen years that the DCI Finals have been held under the roof of Lucas Oil Stadium.

DCI’s World Championships Week will be back in the state of Indiana in 2020 as it has been for more than a decade.

The last days of the season will begin in Marion, Indiana, as 15 competitors vie for 2020’s Open Class World Championship title across two days of performances at Indiana Wesleyan University’s Wildcat Stadium. Spartans will look to defend their Open Class gold medal, and will be rejoined by all 14 of the corps that competed in Marion in 2019.

But this year, a new face joins the ranks of those competing for glory in the Hoosier State. In 2020, The Battalion — based out of Salt Lake City and founded in 2016 — will perform at the DCI World Championships for the very first time.

The Utah corps has rapidly improved over its first four years, both in terms of score — its final tally has increased by more than 30 points in just four seasons — and in terms of organizational prowess, having extended its tour schedule from five events in 2016 to 11 in 2019.

Once events in Marion conclude, the DCI World Championships will be held at Lucas Oil Stadium in Indianapolis for the 12th-straight season. Three days of competition featuring more than 40 World and Open Class corps will be the capstone series of the 2020 DCI Tour.

Book your hotel for the 2020 DCI World Championships in Indy

The 2020 DCI World Championship lineup will also feature two corps competing in the International Class ranks for the first time ever. British powerhouses Kidsgrove Scouts and Beeches Performance Ensemble will both be coming to the United States for a brief stint of performances, concluding in Indianapolis.

International flair will also be on display on the final day of the DCI Tour, Saturday, August 8, with the fifth-annual SoundSport International Music & Food Festival. A variety of local, national and international groups are expected to perform, including a return of the Calgary Stampede, 2018’s dual SoundSport and DrumLine Battle champion out of Canada. This year’s event will find a brand-new home even closer to Lucas Oil Stadium, right across the street from the north gates of the venue.

Early this December, tickets to more than 35 of the most popular events of the 2020 DCI Tour will go on sale through the DCI Box Office and Ticketmaster, including single-day tickets to the DCI World Championships.

Sign up for Drum Corps International’s "Box Office Alerts" to receive email notification when tickets to 2020 events near you will be going on sale throughout the winter months.