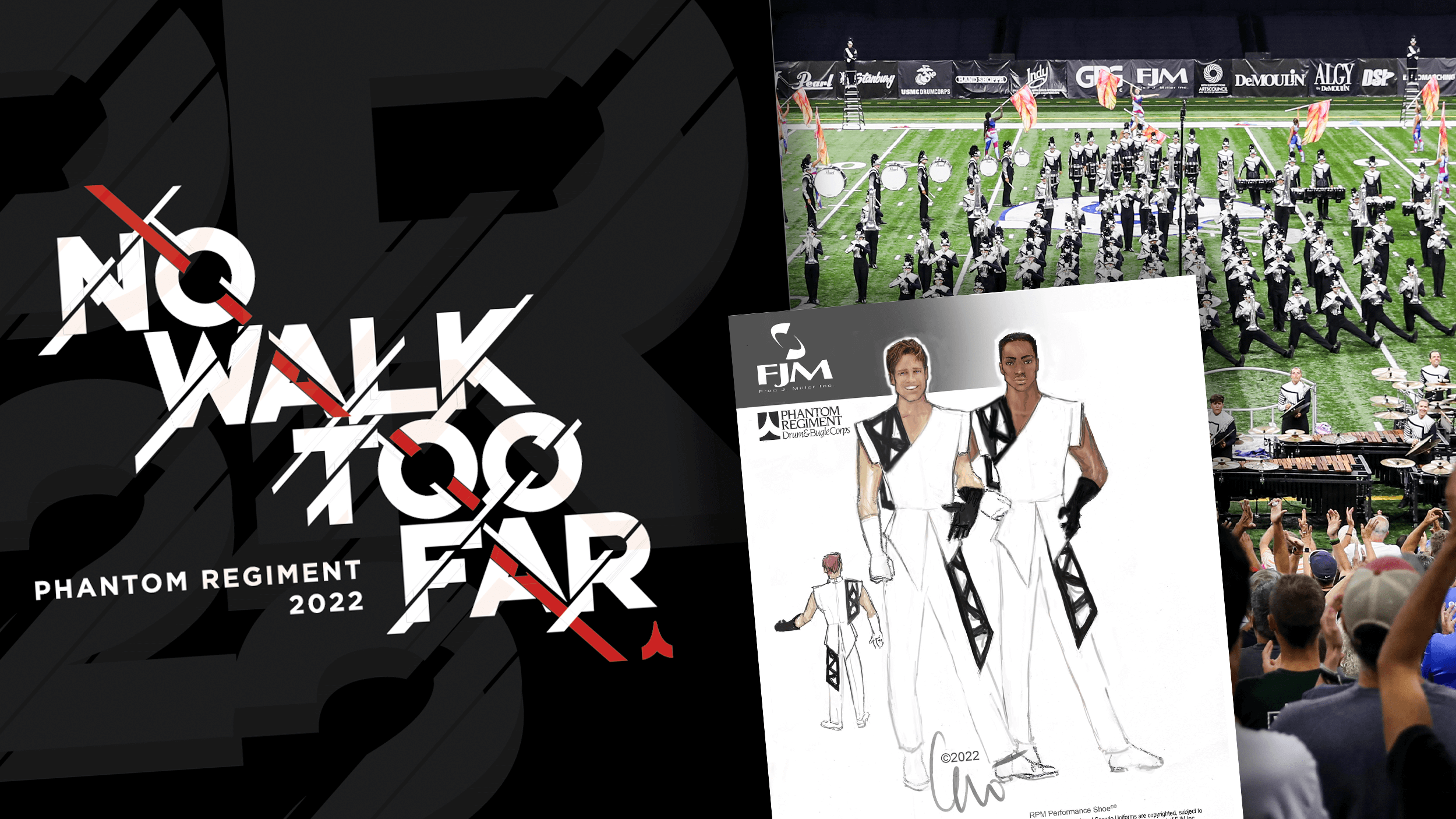 Phantom Regiment's 2022 program is titled "No Walk Too Far."Photo by: Drum Corps International

As part of Phantom Regiment's "Phan-A-Thon" event — a nearly-eight-hour program dedicated to fundraising and sharing information and content with the corps' devoted fan base — the Rockford, Illinois corps released exciting details about the corps' plans for the 2022 DCI Summer Tour.

Here's a quick look at four key takeaways from the May 14 program:

Phantom Regiment reprised and modernized its popular 2003 production, “Harmonic Journey,” for performances on last summer's DCI Celebration Tour. Still fresh off that memorable 2021 production, the Rockford corps announced the title of its programming for the 2022 season.

Phantom Regiment will be performing “No Walk Too Far” on the DCI Summer Tour.

The corps didn’t reveal much as to the kind of story being told by the production, but its announcement video featured many throwback clips from the corps’ history, seeming to allude to a feeling of nostalgia, potentially as it relates to Drum Corps International’s 50th anniversary in 2022.

While Phantom Regiment didn’t go in-depth on its show theme, the corps did introduce an exciting repertoire of music selections for the 2022 season.

Much of Regiment’s music for the upcoming summer fits the mold that fans have come to love and expect from the corps, and also features many artists whose music has been heard on the DCI Tour in past years.

Phantom Regiment stuck to its roots in terms of coloring for its 2022 costume, designed by Fred J. Miller, Inc., but the style carries plenty of modern flair, including a sleeveless look for all sections of the corps.

The corps revealed artist renderings of the uniforms for the coming summer that included three different designs — one for the corps proper, one for drum majors and one for the color guard.

Brass and percussion performers will sport Regiment’s recognizable black-and-white color scheme; the uniform look is largely white, with a few panels of a jagged black-and-white pattern on the sleeves and down the left leg. Drum majors’ uniforms will fit into a similar style, but in all-black, with a sparkling design in similar locations.

As for the color guard, Regiment performers will sport all-red for the first time since 2017. Many Phantom Regiment color guards of the past have featured fully-red costumes as a pop of color on top of the corps’ otherwise neutral palette, including in 2012’s “Turandot” and 2016’s “Voice of Promise.”

Many drum corps have close ties to their hometowns, and Phantom Regiment’s bond with the city of Rockford, Illinois is no exception. Regiment has been based out of the far northern Illinois city since the corps' founding in 1956.

In one segment of the "Phan-A-Thon," Regiment sat down with the mayor of Rockford, Tom McNamara, who said of Regiment's special connection to the city, "It’s really immeasurable, we’re so very fortunate to have this relationship with the drum corps."

We are proud to call Rockford our home since 1956, and of the relationships we have with the City of Rockford Government, including the team at GoRockford and Mayor Tom McNamara. There are a lot of exciting things happening here! Be sure to watch If you're planning on coming to the Show of Shows this year.

Regiment also took a deeper look into the history of the corps in Rockford, through the lens of corps legends and Hall-of-Famers, Tim Farrell, Ron Shulz and John Baumgartner.

While we're busy getting the final numbers totaled from Saturday's Phan-a-thon, here are all 5 of our Rockford tour segments with PR legends and Hall of Fame members, Tim Farrell, Ron Schulz, and John Baumgartner.

Phantom Regiment set out to raise $60,000 as part of their "Phan-A-Thon" programming and as of publishing is just over $8,000 from reaching their goal.

Pledge your support to the 2022 Phantom Regiment