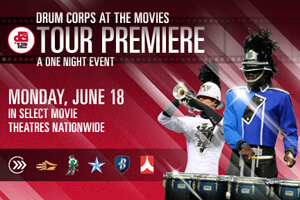 Presented by NCM Fathom Events and DCI, this event will be broadcast to nearly 550 select movie theaters across the country through NCM's exclusive Digital Broadcast Network.

"Now in its ninth year, Fathom's DCI events continue to transport audiences from their local cinema to the field alongside all of the competitive action," said Shelly Maxwell, executive vice president of NCM Fathom Events. "This year's anniversary event will showcase performances by the most talented marching musicians in the country."

Find a participating Tour Premiere theater near you at FathomEvents.com