Bluecoats’ 2021 production, “Lucy,” brought the second act of the Canton corps’ dive into Beatles lore to the fields of the DCI Celebration Tour.

The program, featuring a variety of songs from all corners the Fab Four’s deep discography, picked up where 2019’s program “The Bluecoats” left off, with the exit of the “Sergeant Pepper” character and the entrance of a new protagonist, Bluecoats’ representation of the centerpiece figure in John Lennon’s “Lucy in the Sky with Diamonds.”

After waving goodbye to Sergeant Pepper in 2019, Bluecoats' introduced Lucy in 2021.

Lennon’s 1967 song brings to life the story of a character whose origin was found in a drawing by Lennon’s son, Julian. The song’s lyrics describe Lucy as a “girl with kaleidoscope eyes” who leads the listener down a second-person psychedelic journey.

“The whole idea is in our trailer,” program coordinator Dean Westman said. “John Lennon’s kid, Julian, came home one day and showed him a cool piece of art, and he thought that was awesome, and he wrote a tune about it because he was John Lennon. And that’s kind of what we ran with, just that as a premise.”

Much like Bluecoats’ 2019 program, “Lucy” was rife with subtle details and hidden effects, some added in reverence to the Beatles, others out of nostalgia for the Canton corps’ past.

Here are five unique wrinkles, through the “kaleidoscope eyes" of the corps’ design team itself, as featured in preseason panel interviews conducted by the Canton corps:

"#IntermissionIsOver" was a popular message from Bluecoats before and during the 2021 season. It carried a double meaning — the pandemic-fueled shutdown of drum corps was finally in the past, and act two of the corps’ Beatles journey was ready to take the stage.

But it went a little deeper than that; according to Westman, the connection between the Bluecoats and The Beatles was always going to be a two-part production.

Even as early as spring training in 2019, Westman remembers discussions taking place about what was coming in the second chapter of the story, chapter one of which had yet to even be told.

“Pretty early on, I’m going to say in spring training, you would hear (artistic director) Jon (Vanderkolff) and (color guard caption supervisor) Jim Moore start talking about this thing as a two-act show,” Westman said. “It always resonated with me, especially when I saw at the time how many awesome things were not going to make it into the 2019 show.”

When Bluecoats put their 2019 production on the field, it featured eighteen unique Beatles charts.

The crazy part? They wanted to use more. Luckily, for the Canton corps, they were able to take a few pieces of music from off of 2019’s “cutting room floor” and slot them into “Lucy” — namely, “With a Little Help From my Friends,” which is featured in both the opening and closing impacts of the program.

“We talked through the entire Beatles catalog,” CEO Mike Scott said. “I mean, we went through the whole thing in 2019… and it was difficult to curate and decide what to do and what not to do given the breadth of the catalog. One of the things I really like about this year is it’s an opportunity to take some of those pieces that we decided not to do, and to do them.”

According to brass arranger Doug Thrower, part of the exclusion of certain songs from 2019’s program stemmed from an uncertainty on just how to perfectly arrange them.

Thrower noted the show’s title track, “Lucy in the Sky with Diamonds,” as well as “I am the Walrus,” as songs that were tougher to crack in terms of reworking them for drum corps instrumentation.

“Some of these tunes, I purposefully avoided (in 2019),” he said. “At the time, I wasn’t really sure how to treat them … Sometimes the melodies are so dependent on the lyrics that they don’t always translate to instrumental music.”

Bluecoats made a point to truly bring the lyrics of “Lucy in the Sky with Diamonds” to life by means of sound design.

The most easily-recognizable example came just following the show’s opening impact, and before the introduction of the “Lucy” melody. After a brief vocal sample of the lyrics, “Picture yourself in a boat on a river,” pieces of the corps’ high brass section traded off a variety of rising and falling passages, creating the sensation of the current of flowing water. 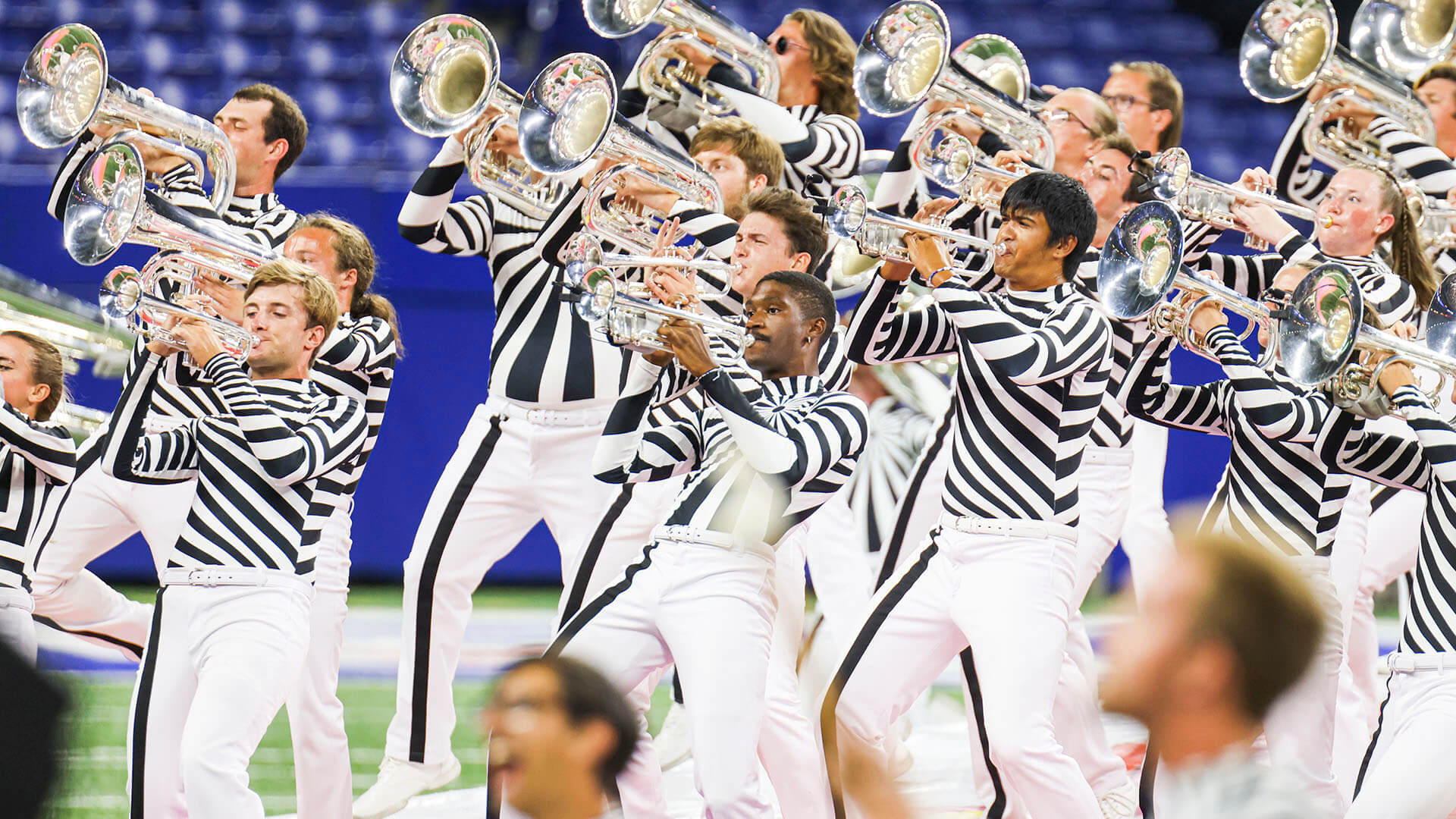 Bluecoats perform "Lucy" at the 2021 DCI Celebration in Indianapolis.

“When you hear the lyric, ‘boat on a river,’ you’re going to hear ripples on the river in the music,” Thrower said. “That was fun, doing that kind of composition and letting the lyrics kind of guide us.”

A similar rising-and-falling sensation appears following the reference to a lyric from “Tomorrow Never Knows,” wherein the recorded vocalist sings, “Turn off your mind, relax and float down stream.” Following that point, Bluecoats’ low brass section played a repeating sequence of notes going up and down the scale.

The audio sequence prior to the official opening of “Lucy” featured a variety of sound effects as corps members set up the field for their performance.

This soundscape included a few incoherent phrases of sorts, which were actually regular spoken phrases played backward; reverse audio, at times, was a brush with which the Beatles painted as well.

According to sound designer Matt Jordan, the inverted clips featured at this part of the production were taken from the original ending of 2019’s production.

“All of the reverse vocals there at the beginning are all ‘The End,’ from 2019, in reverse,” Jordan said.

Bluecoats have made a habit of being as secretive as possible with their show information during spring training, and according to Scott, that was even the case with members during winter camps entering the 2019 season.

The corps’ staff didn’t want performers knowing they’d be performing the music of The Beatles quite yet, so they temporarily removed all traces of the Fab Four from their scores.

But one bar snuck through the cracks.

Percussion arranger Tom Rarick admits, it was a passage of front ensemble music, wherein a very brief reference to the melody from “Here Comes the Sun” was left un-erased. And of course, someone caught it.

“We gave them all music that was completely sterilized of Beatles material,” Scott said. “But of course, the marimba players had a melody, like, once at the end of something Tom gave them.”

At that point, members almost immediately knew what was going on. Luckily for Bluecoats, the corps was still able to keep fans in the dark until the DCI Tour Premiere in Detroit.

Watch the full performance of "Lucy" on FloMarching.com