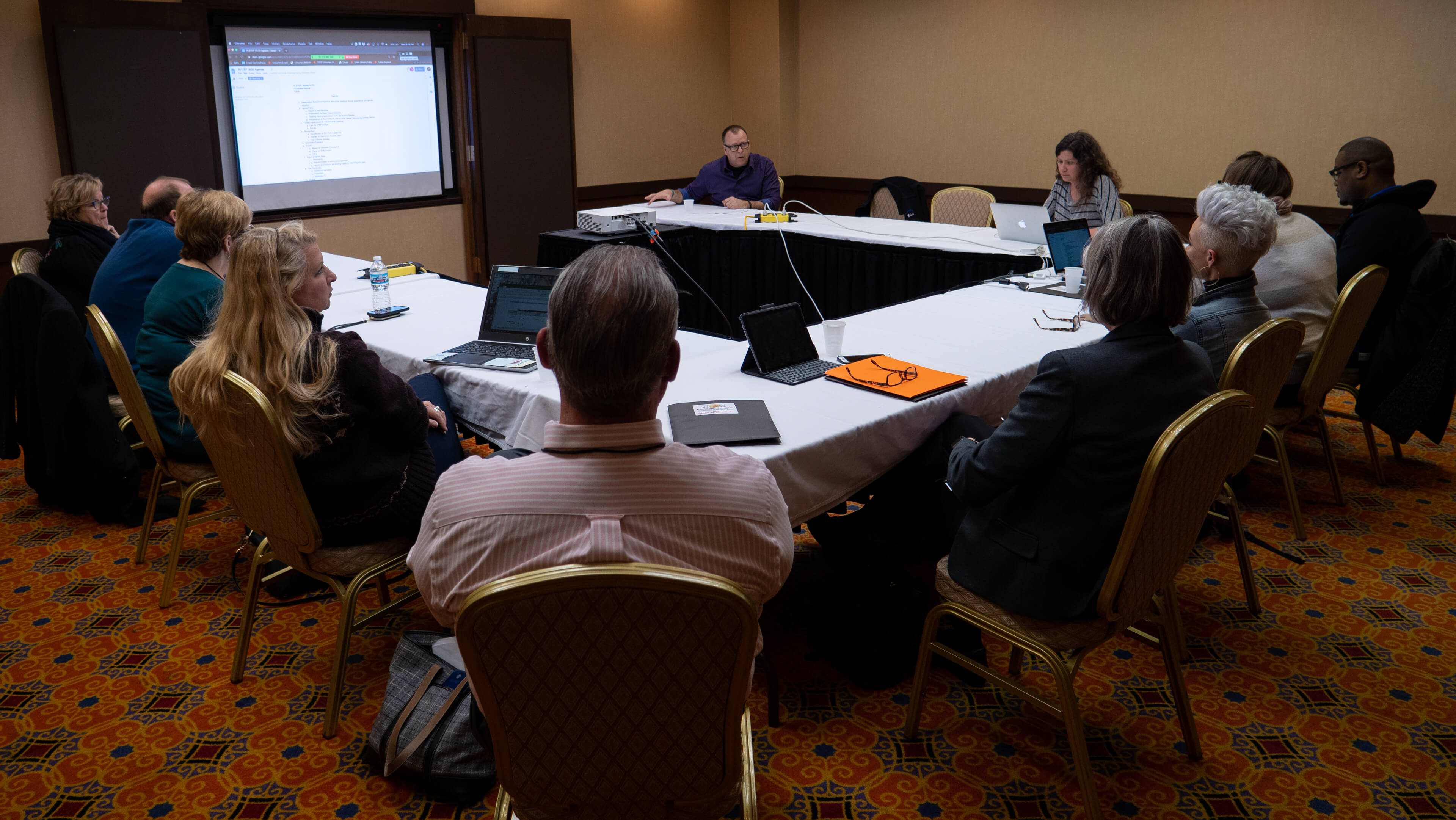 The IN STEP: Women of DCI committee met on Wednesday as part of the 2020 annual meetings.Photo by: Drum Corps International

INDIANAPOLIS — On the first full day of action at the 2020 Drum Corps International Annual Meetings, DCI’s Dan Potter had the opportunity to sit down with Bluecoats CFO/COO Genevieve Geisler who serves as the chair of IN STEP: Women of DCI to discuss what the committee has been up to headed into the new year.

Five key takeaways from the interview:

Geisler mentioned that the IN STEP committee held a number of successful events in 2019 throughout the DCI Summer Tour and World Championships.

Most recently, the committee wrapped up the year with a social event at the annual Midwest Clinic International Band and Orchestra Conference in Chicago. According to Geisler, more than 150 attendees had the opportunity to network with other women in music and education, while also hearing from Lisa Tatum, the brass caption head of The Academy.

Kicking off the meetings with Madison

Before the annual meetings got going in earnest on Thursday, a number of committees had the opportunity to meet and discuss their own relevant topics Wednesday night.

During these evening sessions, the IN STEP committee was able to hear from Madison Scouts CEO Chris Komnick on the corps’ experience with gender inclusivity in the early-going of the 2020 season.

New-look Madison Scouts off to strong start with 2020 auditions

“It was really informative,” Geisler said. “It's been talked a lot about how do we diversify, how do we add diversity, gender diversity and other types of diversity within groups in DCI, from the membership level, all the way to the highest levels of your employees and staff. The Madison Scouts just did that experiment for us, which was really interesting to see how many women they had try out.”

According to Geisler, Komnick’s report was quite promising in regards to the corps’ 2020 prospective membership.

“They're not quite finished with their evaluation process, but they're looking like they're going to have quite a high percentage of women, on par or even a little bit higher than the average across all corps,” she said.

Obviously — and Geisler put it best — “there’s still work left to do.”

And progress has been quite evident. Geisler mentioned that she’s seen women’s involvement at the top levels of influence in the activity grow substantially in the few years since the IN STEP committee’s inception.

“We've gone from zero or one or two women at the table or around the table at the voting membership and DCI Board of Directors level to several. I think that's been a big positive step.”

Geisler noted a handful of areas where she sees room for further evolution within the drum corps activity, most having to do with continuing to find in-roads in all areas to build upon the current positive trends of gender inclusivity.

“That's the question I get a lot and that's something that we're working on, providing more opportunities and ways for people to know how to reach out when they want to do so.”

Geisler also said that one of the committee’s initiatives for the coming year will be the “I Am IN STEP Pledge” that corps can take as a way to showcase the progress or steps they are taking to promote gender diversity within their organizations.

At the annual meetings

To start off 2020 at the DCI Annual Meetings, the IN STEP committee will have the opportunity to present to those in attendance on several occasions throughout the weekend.

Most notably, Saturday morning’s sessions will include a presentation featuring Dr. Caroline Hand, associate director of bands at Ball State University. Hand will speak alongside Geisler, presenting to the voting membership, corps instructors, and DCI Board of Directors in regards to how to further develop gender inclusivity within all organizations.

“(We aim) to give people tools to help make the women who already work for them more successful at becoming leaders within their organization, and how that can benefit both the woman herself, of course, but also all the members and stakeholders within the membership and organization that they're working with.”

Lindsey Vento — who has been a prominent female figure in the marching music activity as artistic director for The Academy — recently joined the IN STEP committee and will be presenting alongside Geisler at this weekend’s Drum Major Leadership Summit.

The presentation will encourage young women in student leadership roles within the activity to pursue the next step in that trajectory.

“She and I are going to be speaking to the drum majors about what IN STEP has been doing, but also what it's like to work as a woman in the activity.”

According to Geisler, Vento is a prime example of a woman who has reached a major leadership position within the drum corps community. As a result, Geisler hopes the committee’s presentation will display to those in attendance the viability of a future in drum corps.

“As a designer, I think she has a really important role to play, because one of the most important things I think that we can do is show women who are succeeding within the activity, and let women who are younger right now know that that's a career path they can go down.”