Founded in 1981, the Friends of DCI program began with a dedicated group of some 30 passionate drum corps fans who came together and decided to donate a few dollars more than the value of their tickets, with the hope of contributing to the future of Drum Corps International and its corps. Many of these charter members still enthusiastically support the drum corps activity today, as the ranks of the Friends have grown to more than 400 generous benefactors. More than 180 current Friends have been contributing annually for more than a decade. 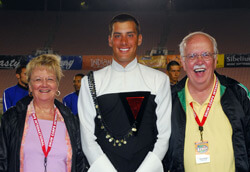 Longtime Friends members Karin and
Wayne Karge recognize a 2007 Friends of DCI
Scholarship winner.
Drum Corps International appreciates the heart-felt efforts and contributions put forth by the Friends network. Today, two special programs are managed by the group, including the "Friends of DCI Scholarship" for corps members, and the annual "Volunteer of the Year Awards" acknowledging the significant contributions of the unsung heroes who are the lifeblood of each of the corps. Being a part of the inner circle of the Friends of DCI is rewarding on many levels. The donation of a "Gift of Excellence" can be in any amount, or done through a specified membership level. Now is the best time to check out the membership levels available for the 2008 season! In addition to the satisfaction that comes with the knowledge that you're helping to ensure a bright future for the corps and their members, some of the benefits of membership in the Friends program include: Now is your chance to become a Friend to the more than 5,000 performers who take the field each summer in the pursuit of excellence!