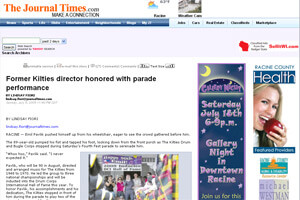 Former Kilties director honored with parade performance The Journal Times reports that Emil Pavlik, who is a 2009 DCI Hall of Fame inductee, was treated to a performance in his honor by the Kilties all-age corps during Racine, Wisconsin's Fourth of July parade. The corps stopped in front of 89-year-old Pavlik and played two songs he arranged for the group while he served as their director from 1948 to 1970. Read more at TheJournalTimes.com 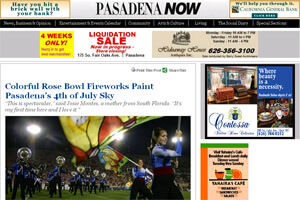 Colorful Rose Bowl Fireworks Paint Pasadena's 4th of July Sky Five World Class corps performed as part of a huge Fourth of July celebration in Pasadena, Calif. on Saturday. The corps wowed fans, many of whom had never seen a drum corps performance before, as Pasadena Now reported. Read more about the event at PasadenaNow.com

Turf makes a world of difference for DCI event The eight drum corps that performed in Michigan City, Ind. last Sunday were treated to a brand new artificial turf field, the Michigan City News-Dispatch reported. Corps members and staff of the Glassmen and Legends expressed how much they enjoy marching in Ames Stadium on the new surface. On Aug. 4, the venue will also host the DCI World Championship Open Class Quarterfinals. Read more at TheNewsDispatch.com 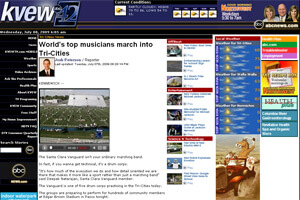 World's top musicians march into Tri-Cities Santa Clara Vanguard alum and KVEW 42 news reporter Josh Peterson caught up with the Santa Clara Vanguard as the corps rehearsed in Kennewick, Wash. earlier this week. They were one of five corps preparing for the Drums Along the Columbia event. Read or watch this broadcast to learn what it's like to be a member of Santa Clara Vanguard and what they say makes all their hard work worthwhile. Watch the clip on KVEWTV.com 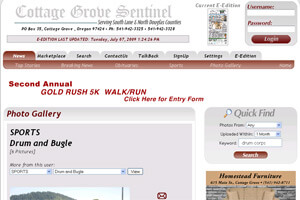 Photo Gallery: Drum and Bugle A photo gallery on the Cottage Grove, Oregon Sentinel Web site features the Blue Knights as they rehearse earlier this week. View the photos on CGSentinel.com