In Brasso continuo we'll explore the traditions, rituals and folklore surrounding the drum corps activity. If you know of a ritual, bit of folklore or tradition associated with a corps, e-mail the details to dave@dci.org. If you have a picture of that particular ritual or tradition, e-mail that as well. Thanks! Dennie Hirsch, assistant director of the Strutters, wrote in with this tale. 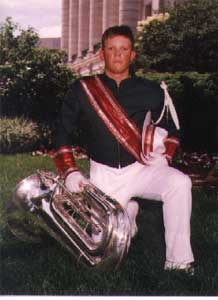 Dennie Hirsch and his long-lost contra
"This past summer, the Strutters were in need of a three-valve contra. After talking to various organizations, I found that Capitol Sound would be able to lend us a contra for the summer. While talking with Steve J. in the office, he had mentioned the contra was from the set that I had marched while I was on the line in 1997 and 1998. He jokingly mentioned that it might even be mine. I responded with, "Well, I would know for sure if it was or not." As everyone knows, your equipment becomes an essential part of you, and you, in turn, are able to pick it out by its various markings, dents and tarnishes. Even the feel of any other equipment just seems wrong. "So the day came and the contra arrived. I would not be writing this story without this ending -- the contra was mine. What a reunion! Oh believe me, I reminisced and told all the stories of all the markings, dents and tarnishes. You see, no one believed me that it truly was my contra. But after several convincing stories (one that involved a lot of steel beams in the parking lot and how my contra ending up in two pieces), I had them believing this truly amazing story of my horn making it back to me for one final visit. Yes, I did take it for a couple test runs of marching and playing. Controlling that horn is a skill set I will never be without. "Again a special thanks to Capitol Sound and the Madison organization for their help in our efforts this past summer." Brasso continuo archives