By Allison Owen During my 16 years of existence I've done more than my fair share of moving. I was born in Sacramento, Calif., and my dad's job took us around the state until I was 9 years old. Then it was off to the East Coast. We moved to Lynchburg, Va.; then to some city in Pennsylvania for a few months -- I don't even remember the name -- and ultimately back to Lynchburg. After about a year and a half, sure enough, it was time to pack up and move, this time to Tennessee. 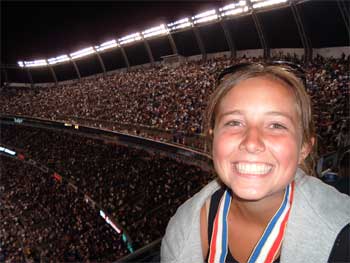 Allison Owen at World Championships in Denver.
I can't say I regret that we've moved so much. It's made me more cultured and given me so many opportunities. If I hadn't moved here I don't know if I would have joined color guard and then ultimately joined corps. It's crazy how things work out. This is the longest I've ever lived in one city/house. I've been in this house for almost three years now, and at my school for three and a half years. It's weird for me, seeing as I'm used to changes. But now it's that time again. It's a long story, but drum corps is the source for the change, so it'll be worth it.

It all starts with the fact that I have been having huge conflicts with my directors about me marching corps -- but not until after I came home. It's difficult when my directors encourage me to march drum corps, but then when I get back from the summer I'm given an incredibly hard time about it. I knew coming back would be hard. I'd say the real indication of that was when I received a message in Denver saying that if I wasn't home by Aug. 9, I would be kicked out of band. This is all after I was allowed to march with the conflicts and being put on "probation." Of course this created a problem since we got back to Memphis late August 8, and I live roughly nine hours from Memphis. I ended up not being kicked out, but the first thing I heard when I showed up at practice was "You're late." So, naturally it was a very discouraging start to the band season for me. One thing I promised myself I would never do was disrespect my band directors and leaders by thinking I "knew more than them" because I had marched corps. So I tried my hardest to not have an ego. I helped out only when called upon and tried to keep my mouth shut unless called upon to speak. Despite my efforts, it seemed that nothing I did was good enough. Since I had been in Denver when we had band camp, I was told I couldn't be a captain or anything of that nature due to my absence. This was no big deal for me; I didn't need to be captain. I was OK with it and I knew I'd have to catch up quickly. When I did try to help some of the newer members I would get a response of, "Well what would you know? You weren't even at band camp." It seemed that everything I did was frowned upon. I tried my hardest and despite these efforts, I was treated poorly for no apparent reason. It was hard on me to deal with these opposing forces when marching corps meant so much to me. The people that encouraged me to march were now giving me a hard time because of it. I'm a very emotional person, so naturally being treated this way hurt me.

There was one instance I'll never forget: I was having a bad night and I dropped a rifle toss. I'm pretty sure it was my only drop of the season, but I was still so mad at myself afterwards for dropping something I shouldn't have. I did pushups, I did reps of the toss -- everything I'd learned in corps to discipline myself. Later that night I was told that I "had no excuse to drop" because I had marched drum corps. This truly hurt me more than anything had before. I never said that marching corps made me perfect. No one has an excuse to drop, but since I did make that mistake, I punished myself. I didn't need to be called out in front of my peers for making an error. Despite all the conflicts, I am determined to still march corps. It means more to me than anything in the world, so I won't give it up that easily. However, I was advised not to go back to my own corps. I was told to go for "something better" because my very own corps family "wasn't good enough." I think that probably hurt me most of all. Bashing my corps family -- the organization I love more than anything -- truly broke my heart. Especially when the people criticizing my corps were the very ones to encourage me to march in the first place.

It's been a rough time for me, and by no means am I attempting to give my directors a bad name. I just can't take the harsh treatment much longer. Since I am the only one in my band who marches corps, I'm the only one who gets the unpleasant experiences because of it. I'm not ridiculing the organization of which I was a part of for a few years. Their goals are just different than mine. Another aspect that's been taken into consideration is my brother. Matt is in 7th grade and a very avid percussionist (he really wants to be on the Blue Devils snare line when he's older.) I don't want him to go through what I have gone through with band vs. corps.

So now we're in a precarious situation. What to do? Well, for about a year now I've known a guy named Taylor that lives near me. He marches with Carolina Crown. Five members of their band marched corps last summer, were encouraged all along the way, and they were nicely welcomed back into their band at Sullivan Central High School. Basically, they acted just like I did when they came home and were treated with the respect they gave. That was really all I wanted in this whole experience. I came home and tried to return to "normal," but wasn't treated the same. After all the issues I've been forced to deal with in the months since I came home, it finally took its toll on me. After many deliberations, my parents came to a decision. We're moving about 20 minutes away so that my brother and I can go to the county school and participate in a very welcoming band program that is very pro-corps. It may seem crazy to people that my parents would up and move for a band program, but it's so much more than that. I'll have friends at school that march corps and a director who even goes to shows to visit his students. It's almost overwhelming for me to think that I'll actually be encouraged to pursue my dreams all year long. I never wanted it to come to something like this. I'm in the middle of my junior year of high school and starting at a completely new school. As much as I'm used to moving, it's still a new experience. It does help, however, to know that it will be worth it. I'll be able to enjoy being in band, winter guard, and drum corps all at the same time. Like I said, it may seem crazy to you, but it is a better experience for me emotionally. Since I've had a great year being with Memphis Sound and now look forward to my year and a half at Sullivan Central, I can't wait to see what this new year brings.
Allison Owen, 16, is a junior at Sullivan Central HS in Blountville, Tenn. She's in my second year in the Memphis Sound guard and enjoys dancing, writing, English, guard, photography, having fun and performing. For college she would love to attend the University of Oklahoma and major in journalism or English; however, she'll probably end up at the University of Memphis for in-state tuition's sake.