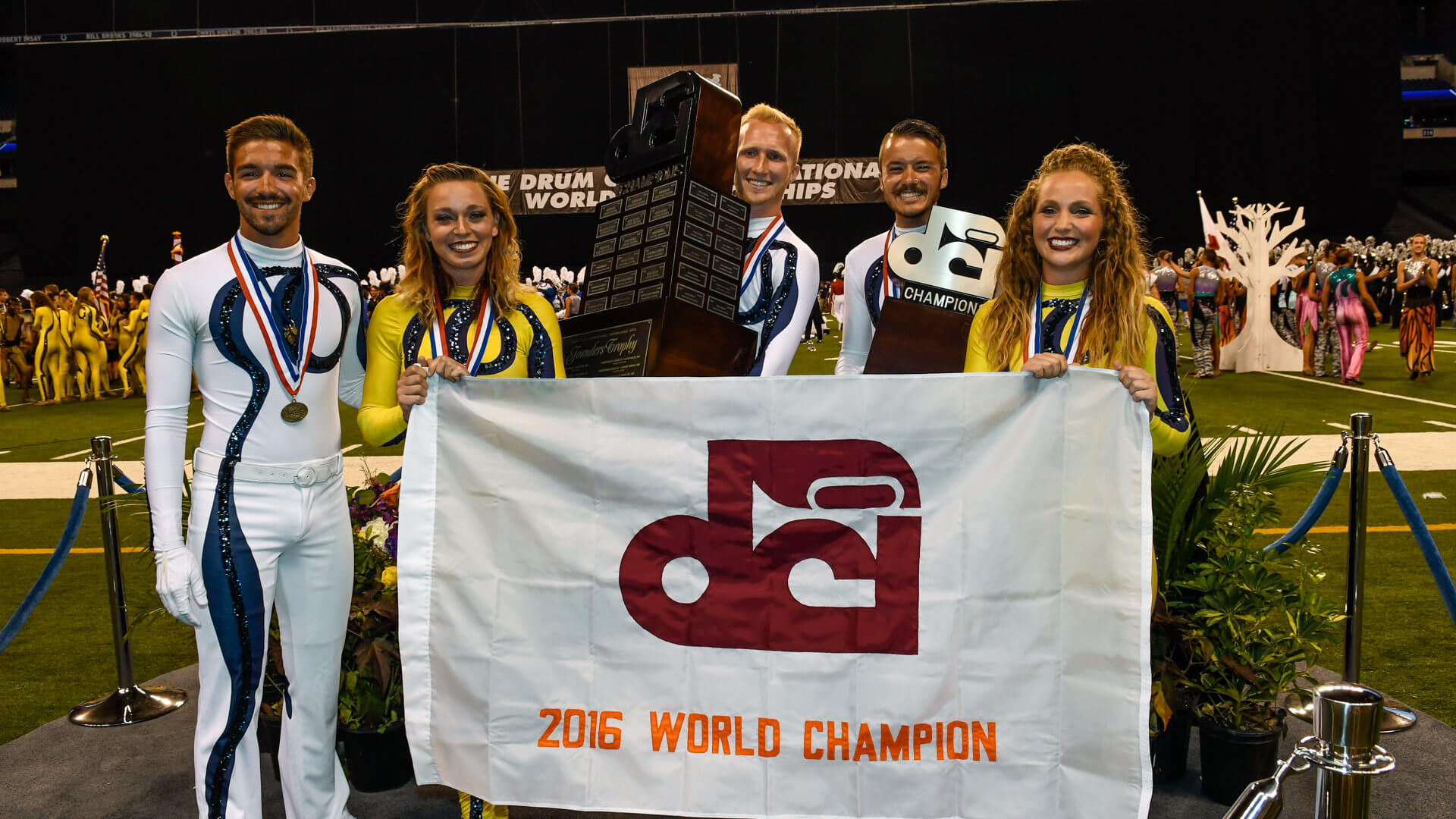 Members of the Bluecoats are presented with the DCI Founders Trophy.Photo by: Drum Corps International
A signature cheer of “Bloo!” could be heard from across a crowd of more than 22,200 at Lucas Oil Stadium on Saturday night, as members of the Bluecoats brought home their very first DCI World Championship title in the history of the Canton, Ohio organization.

In a field that has been dominated by the Blue Devils in six of the last 10 years, the Bluecoats will be just the 10th corps in 44 years to have its name affixed to Drum Corps International’s stately Founders Trophy.

“It’s a feeling of elation,” Bluecoats executive director David Glasgow said from the field of Lucas Oil Stadium after the corps’ win. “Our organization has been in existence for 44 years. We’ve folded twice and I don’t know that a lot of people know that. To be here where we are tonight is an incredible accomplishment for everybody who has ever stepped in our organization’s door.”

With a score of 97.650, the Bluecoats will also take home hardware for the Donald Angelica Award for Best General Effect.

“I honestly felt just as good as I do right now the moment we walked off the field,” Bluecoats drum major Samuel Crawford said. “I can’t describe to you what it was like seeing my brothers and sisters in tears at how amazing our performance was. I know I will carry that moment with me for the rest of my life.”

Although the Blue Devils did not pull off the same table-turning win as 2015 when they came from behind on Finals night, they scored 97.250 points for a second-place performance that corps members put their hearts into.

“It was a phenomenal performance and honestly I couldn’t have asked for anything better for our corps,” Blue Devils drum major Nikko Martinez said. “I know that it’s been an extremely competitive season for all of us, but really we just put our heart and soul out there.”

Carolina Crown not only received the bronze medal with its score of 97.088, the corps stole the show, taking home the George Zingali Award for Best Color Guard, the John Brazale Best Visual Performance Award, and the Jim Ott Best Brass Performance Award. 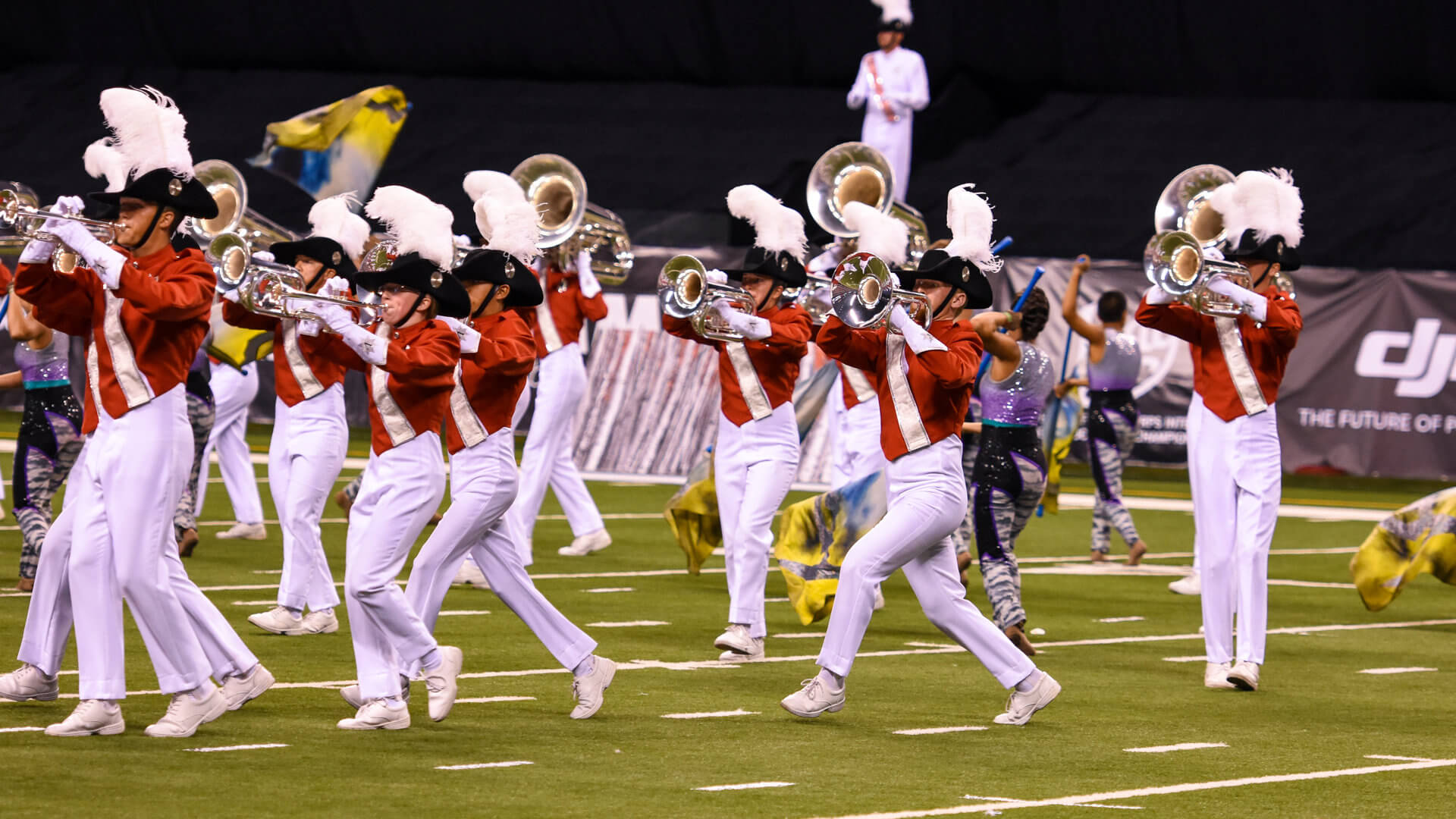 Santa Clara Vanguard finished in fourth place with a score of 95.300. The corps’ percussion section dominated the competition, taking first place in the caption during Thursday night’s Prelims and Saturday’s Finals, allowing the corps to take home the Fred Sanford Award for Best Percussion Performance.

“It rained for the warm-up and I honestly think that may have been a good thing for us,” percussion caption manager Paul Rennick said about the corps’ Finals-night performance. “These guys are so experienced that I don’t think it rattled them at all. Tonight was totally electrifying; they were completely focused.”

Setting out to rebound from 2015 when the corps experienced its lowest placement since the early 1980s, the Cavaliers finished 2016 strong, in fifth place with a score of 94.025.

“This season has been all about trust as we engaged a brand new team, and these guys committed to the Cavaliers,” executive director Chris Lugo said. “We talked all about inspiring an audience, and that’s what they did today. We are so proud of the Cavaliers.” 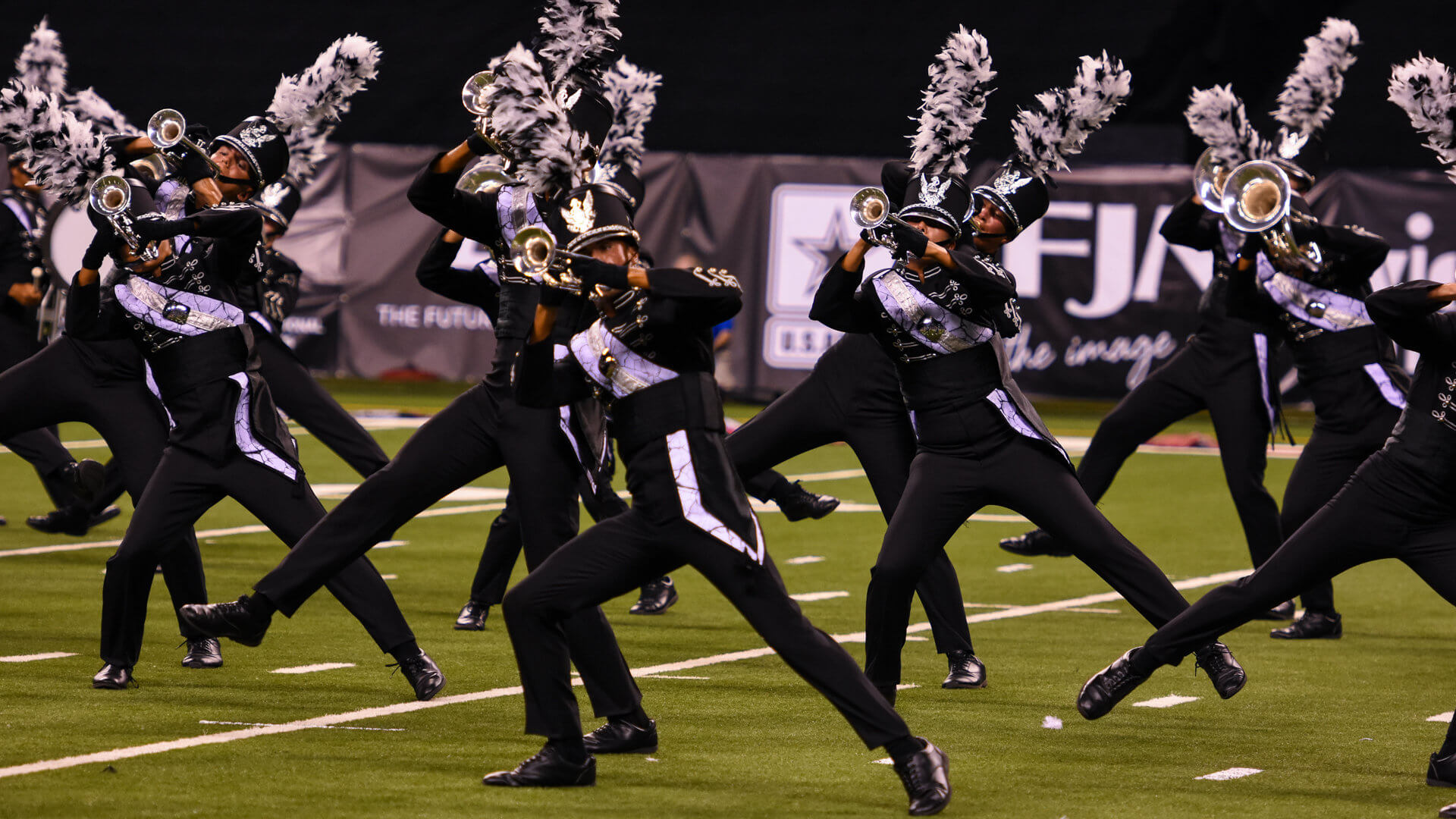 Director of the Cadets George Hopkins said the corps ended its season less than he’d hoped (6th, 92.763), but he is still happy with the hard work from the entire corps.

“They had a great run, probably the best of the three nights; so that’s what you hope for,” Hopkins said. “It’s been a long year and we’ve changed a lot in our production, so the kids have been under duress fixing our problems for us. But it turned out well, so everybody is happy. We learned a lot.”

The Blue Knights took seventh place with a score 90.738 and executive director Mark Arnold said it’s the most improved corps he has ever worked with.

“I’d say this was the most persistent, mature, perform-with-fearless-passion, best corps we’ve ever had,” Arnold said. 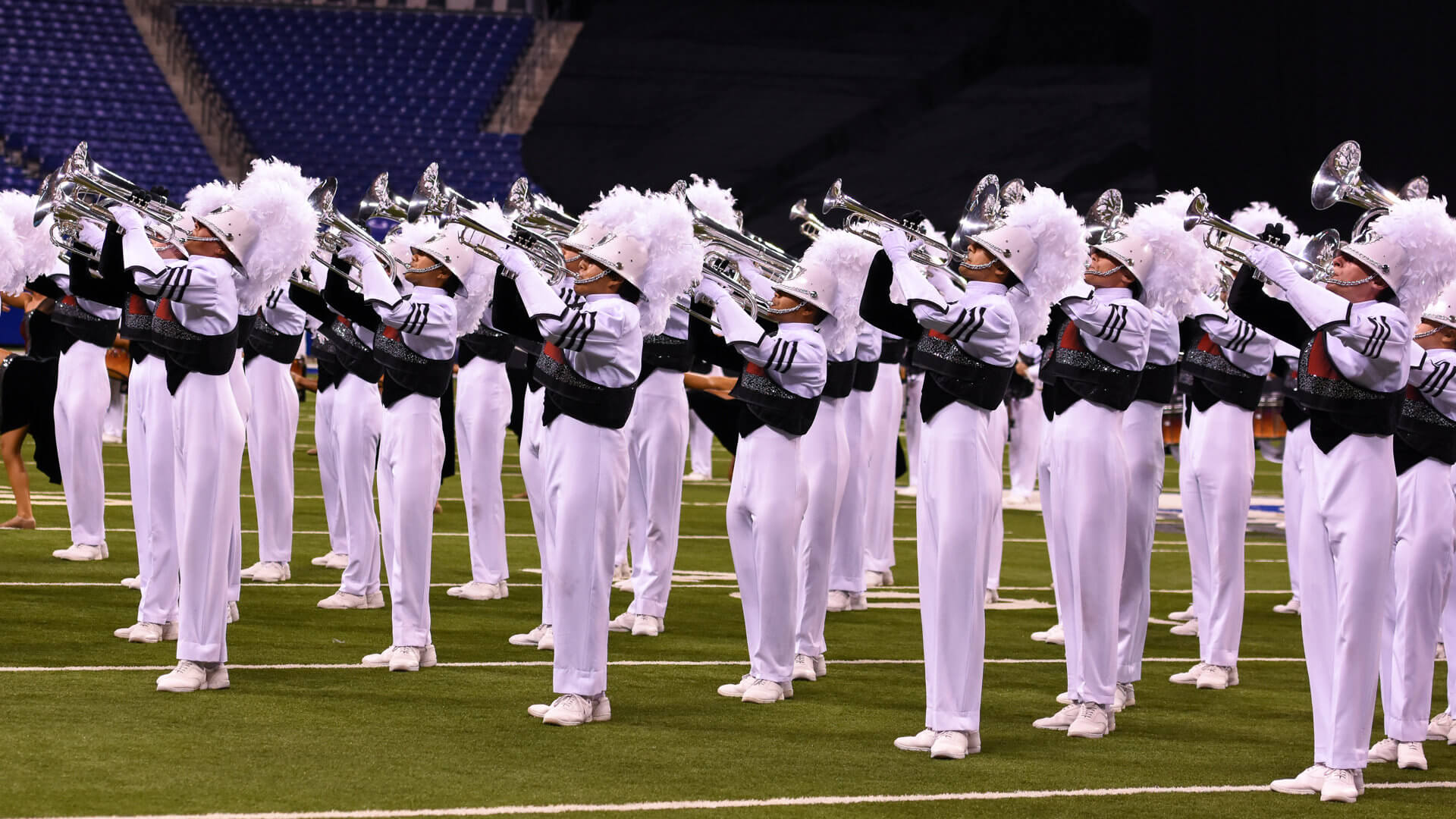 In eighth place, Phantom Regiment added two tenths to its overall score between Semifinals and Finals to end its season with a score of 89.963.

“It was amazing to perform for so many people on such a large stage. What an amazing group of people we have at Phantom Regiment,” said trumpet soloist Jennifer Hepp. “It was great to perform one last time.”

Blue Stars (9th, 89.050) spent the majority of the 2016 DCI Tour in close quarters with Phantom Regiment and the Blue Knights, managing to improve its overall placement two spots from 2015 to 2016.

“It’s been intense, but we’ve just been telling ourselves that we’re doing this for us. We know that no matter what the outcome, as long as we are happy with what we performs, it’s all worth it,” drum major Alec Hinchcliff said. 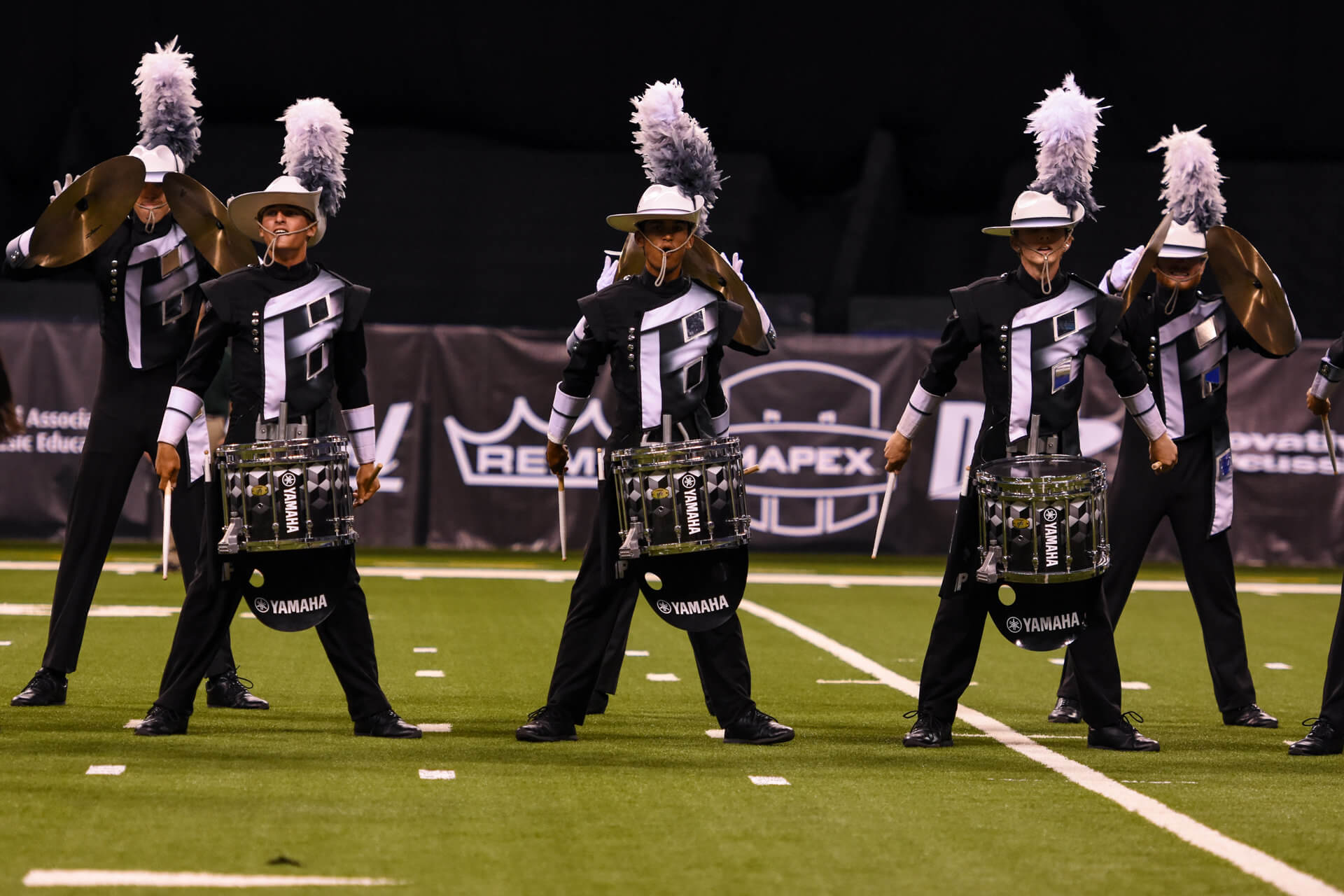 “The ‘Continuum’ will continue in 2017,” Morrison said. “Watch out for the Crossmen.”

The Academy ended its 2016 campaign in 11th place with a score of 86.100, the first time in the history of the corps that it has finished as a World Class World Championship finalist.

Academy executive director Mark Richardson said that in many ways this year’s milestone accomplishment mirrors the corps’ 2006 season, when the group claimed the Division II title in its very first trip to the DCI World Championships.

“It’s so similar. It’s the same journey for the organization, for the members, for the staff,” Richardson said. “It takes equal amounts of time and equal amounts of effort to stand out there on the stage for the last time and be recognized for excellence and achievement. It’s incredibly special.”

Following 13th and 14th place finishes at several regional DCI Tour events earlier this summer, the Boston Crusaders looked to be in danger of falling out of DCI’s top-12 for the first time in 17 years.

According to drum major Mark Hambleton, 2016 has been “one giant rollercoaster ride” for the corps that ended on a high note with a 12th-place finish and a score of 84.800.

“Our corps is one of great resilience over the years,” Hambleton said. “We have a tradition of never dying, even when the odds are all against us. Even when everyone else around us told us we couldn’t do it, we knew we could, and obviously perseverance led us to where we are today.”

A year from now drum corps will return to Indianapolis, this time for Drum Corps International’s historic 45th anniversary.