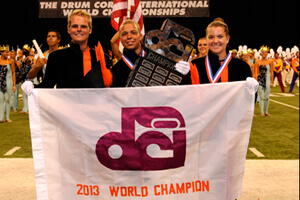 Carolina Crown
Carolina Crown became a World Class World Champion for the first time in drum corps history Saturday, Aug. 10, as the 2013 DCI World Championships concluded at Lucas Oil Stadium in Indianapolis. Not since 1996 has DCI named a first-time World Champion, and never before has it had a Champion that started as an Open Class/Division II corps. The South Carolina corps' 2013 production "E=mC2" led them to victory, taking home a final overall score of 98.30 and caption awards for Visual Performance, Brass and General Effect. "For Crown coming from Division II way back when, it's unbelievable," Crown Executive Director Jim Coates said. "It shows that anyone can come from the last place we took our first year out. [This season] is not so much about the win, it's about the experience of excellence and teaching the kids." Six-year Carolina Crown member and color guard captain Marissa Citarelli said she will never forget seeing the crowd on its feet as she finished her performance. "I couldn't be more proud of what we've done this year," Citarelli said. "Regardless of what the results were tonight, we knew we made history." 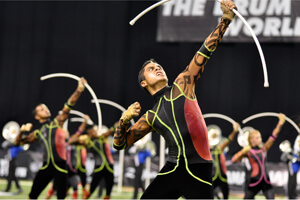 Blue Devils
Finishing in second, 2012's World Champion, Blue Devils (98.05), earned top honors in the Color Guard caption. Drum Major Marvin Reed said his corps' job was to educate and entertain the audience this season with "The Re:Rite of Spring." "It's friendly competition, and we love what we do," Reed said. "I'm proud of [Carolina Crown] and they're proud of us." The Cadets (3rd, 96.95) took home the bronze medal with their production "Side by Side." According to director George Hopkins, the show's transparency made it obvious when the corps had rough points during the summer, but the risks taken throughout the season made the show what it was. "They've been excellent all three nights," Hopkins said. "People don't realize how hard that is to do." After a summer full of tight races up and down the ranks within the Percussion caption, the Cadets took home the Fred Sanford award for best percussion performance. The corps has not won this award since its Championship season in 2005. 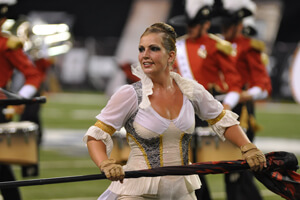 Santa Clara Vanguard
"The fun of it for me is seeing the kids win and seeing them get credited for the hard work," Cadets Percussion Caption Head Colin McNutt said. "There were incredible drum lines this year. I think this was a great year for percussion in general." Santa Clara Vanguard (4th, 96.85) trailed the top three by just a tenth of a point. Executive Director Jeff Fiedler said the corps had not performed works from a musical in a long time, but this season's positive fan response showed that "Les Miserables" was a good decision. "We maxed out today," Fiedler said. "We found a new place to be, above where we were yesterday." After tying in Semifinals the previous night, Bluecoats (5th, 93.35) and Phantom Regiment (6th, 93.25) both improved their scores, but Bluecoats managed to sneak one tenth of a point in front. Bluecoats Drum Major Willie Veenstra had a hard time finding words to describe what it felt like to march off the field after performing "To Look for America" for a last time. 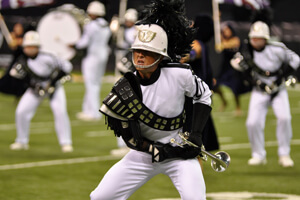 Phantom Regiment
"Scores and performance aside, the feeling you get at the bottom of your stomach when you know that you have something special, something some people never experience, is my favorite part of Finals," Veenstra said. Phantom Regiment Drum Major David Warren said the corps as a whole is now almost unrecognizable from how they started, as they gradually became more unified throughout the season. "We are one in the Phantom Regiment," Warren said. "Tonight, we really did perform as one, and the thing to remember is that we are one for forever, not just tonight." The Cavaliers (90.50) finished in seventh, maintaining the lead on Madison Scouts set during Friday night's Semifinals. Drum major Stephen Parsons said he could tell the corps members felt great from the look in their eyes coming off the field. "I couldn't be more proud of these guys," Parsons said. "We had a great three days, I'm just feeling overwhelmed."

Boston Crusaders
Boston Crusaders (90.40) leapt into eighth, three tenths of a point ahead of Madison Scouts (9th, 90.10). Boston Crusaders Executive Director Tom Spataro, in his last year with the corps, said he shares many of the age-out members' emotions, a bittersweet mix of departing sadness and happiness looking back on eight great years, concluding with a season that makes him proud. "It sounds cheesy, but the corps absolutely 'rose' to the occasion," Spataro said. "Before we set the field, we said our show, 'Rise,' is about the members' lives, about their careers, about the Boston Crusaders. It took on a lot of meaning for everybody." Madison Scouts Drum Major Sean Hadley said knowing his corps had the crowd's support helped him have an amazing show, but celebrating 75 years of a brotherhood close to his heart helped him have an even better season. "Our performance tonight was unbelievable," Hadley said. "It's the last show I'll get to perform as a Madison Scout, and I had 149 brothers out there who I got to perform with. They laid it all on the line." 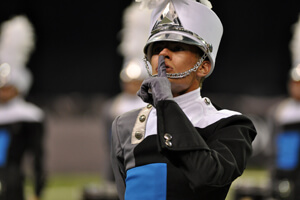 Spirit of Atlanta
Blue Knights (10th, 87.75), Spirit of Atlanta (11th, 86.40) and Blue Stars (12th, 85.45) rounded out the 12 corps participating in the Finals. "We've been so emotionally invested in this show all year long," Blue Knights Director Mark Arnold said. "It has a message about how everything in life continues on and keeps rolling, and it ties in with our corps' song of 'I Go On.'" Spirit of Atlanta achieved its highest score in 25 years. Drum Major William White, concluding his first and last year with the corps, said the season exceeded his expectations. "There was lots of pressure leading up to the last show, but then I got on the field and remembered that I've already done this a million times before," White said. "No one in the stands wants us to fail, they want to be entertained, see a good show and have fun. Returning to the Finals competition after finishing one spot below the top 12 the year before, the Blue Stars finished less than a point away from the 11th-place corps. "Today at Finals, we felt like we were home," Blue Stars Drum Major Zack Crissman said. "49 years have led up to this day; it was a very strong performance." View a complete recap of scores from the 2013 World Championships Finals. Recap Roundup: 2013 World Championship Finals View a photo gallery from this event on Facebook. Read a recap of Carolina Crown's Semifinals victory. Contributing to this report: Michael Boo, Casey Follen, Johnny Gilbert, Matt Malabonga, Christina Mavroudis, Jessica Skogh, Linda & Sid Unser, Chris Weber