Monday Morning Drum Major will put a brief spotlight on the personalities in the drum corps universe. We'll run it each Monday (obviously). If you have an item worthy enough for mention on Monday Morning Drum Major, e-mail it to dave@dci.org Sweet and Souers Talk about double duty. Upon completing her mission at DCI last summer, former intern Alessandra Souers, a music business student at Butler University, headed on over to Bands of America to take on another marching music internship. "I was so thrilled when I received the DCI internship, but I really had no idea just how much fun I would have! I gained so much irreplaceable experience over the summer, and I met so many people who I will never forget. One of these people led me to an internship at BOA, which I was also very excited to get! BOA is only a few miles from my college and the schedule worked out with my classes, so I was able to go to school and intern there at the same time," Souers said. At DCI, Souers wrote and took pictures for DCI.org and the DCI Season Pass, edited and disseminated press releases to media outlets, and performed administrative tasks. 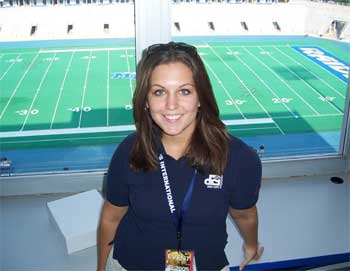 Alessandra Souers
Souers said the DCI internship taught her to react quickly. "My internship with DCI taught me to be more comfortable within an office environment, and it also taught me how to better deal with stress. When running large-scale events such as the DCI World Championships, there are inevitably going to be times in which you have to handle a situation right away. Working with a great team like the one at DCI can really put you at ease when these situations arise; everyone works together to produce an extraordinary event," Souers added. At BOA, Souers furthered the skills she learned at DCI. "My BOA internship actually continued a lot of the things I was learning at DCI, especially my experience in public relations. Although I had direct guidance on my tasks, it was great to be so involved with all the media tasks revolving around the BOA Grand National Championships and other regionals," Souers said. "I also took part in helping to create a functional database of the largest survey ever given by BOA. This database will help the organization see in which areas they are excelling, and in which areas they can improve. It also gives BOA a fairly accurate profile of its audience," Souers said. Next summer, Souers is marching bartione in the Santa Clara Vanguard. And for those BOA/DCI conspiracy theorists out there, this is further proof ... that everyone needs good interns. Interested in a DCI internship? Send a resume to dci@dci.org. Bear down, Cavaliers DCI and NFL fans at Soldier Field in Chicago yesterday were treated to both face-ripping drumming and smash-mouth football. Yep, not a good day for the face. But despite the Bears' painful, season-ending collapse at the hands of the Carolina Panthers (final score: 29-21), the Chicago Bears Drum Line presented by the Cavaliers thoroughly engaged the 59,127 fans watching the game in person. "They'd be out there, they'd drum, and the stands would go nuts," said Cavaliers director Jeff Fiedler, who watched the game from the sidelines with the drum line and DCI staffer/former Cavaliers drum major Chris Weber. "The drum guys were right on it. People loved it." Fiedler estimates that the drum line played the Bears theme song, "Bear down, Chicago Bears," 30 times throughout the course of the day. "It was electric," Fiedler said of the game. "I've never been to an event like that. It was electric all the way to the last 41 seconds. The range of emotions was just incredible." Everywhere babies It's raining kids -- no, people are not throwing babies, not yet anyway -- in the DCI world! Or it will be soon. Glassmen director Brian Hickman and his wife, Julie, are expecting their second child later this month. Their new kid will join Evan (5) and Colin (2). Down South, meanwhile, fans familiar with the inner sanctum of DCI.org know the husband-and-wife multimedia team of Ricky and Tracy Fritzsching of Cypress, Texas, are expecting a baby girl today. Meanwhile, back in August, my wife and I welcomed twin boys Tait and Axel to the drum corps planet. They joined Klara (3). Touch of grey Fans of "When drum corps was drum corps" are in for a back-in-the-day trifecta during the summer of 2006. First off, the Bayonne Bridgemen, that wacky, banana-uniformed corps from New Jersey, will send an alumni corps to perform in exhibition on Saturday night, Aug. 5, as the encore for the DCI Eastern Classic. Earlier that evening, the reigning DCA champion Reading Buccaneers are slated to perform in exhibition as the opening act. Finally, the Madison Scouts alumni reunion corps, who have already begun rehearsals, will storm the field during World Championship semifinals on Aug. 11. No word on if the Bridgmen are bringing back the dude in the gorilla costume. Buy tickets for the Eastern Classic Buy tickets for World Championship semifinals Do you have an item worthy enough for mention on Monday Morning Drum Major? E-mail it to dave@dci.org .