By Allison Owen It's almost that time of year again. Marching band is reaching its end, it's getting cold outside, staff announcements are being made, a few show concepts are being announced, and a new and exciting season of drum corps is just around the corner. I remember two years ago at this time I was so unbelievably nervous about my first corps audition. I had no idea what to expect. Looking back, I was so inexperienced and totally unprepared. I practiced and did everything I knew how to do to prepare for my audition, but when it came down to it I didn't know enough to handle the experience of a top-12 Division I corps yet. 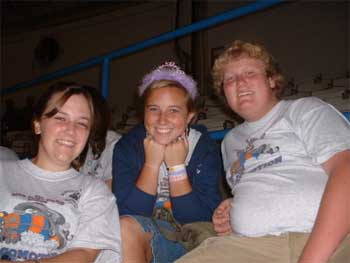 Allison Owen (center) and friends.
On the other hand, there was nothing I could do on my own to get the experience. Even though it was upsetting, I knew I couldn't have done anything else, so I worked hard to do other things to gain experience. Last year I ran into several struggles -- mostly with myself. My knee was hurting in a way it never had and I was unsure what that would mean for my guard future. Luckily, after much deliberation, I took a summer off of guard to see how things would go. Thankfully my knee is better than ever and I'm ready for another season of guard. So here I am at that critical point of every corps person's life: Audition time. I don't know what it is, but I have never been more nervous about anything in my life. Maybe it's the fact that I'm doing what I've always wanted to do, but never had the guts to try. I've spent countless hours thinking about it, and I've come to the conclusion that if I auditioned anywhere else I wouldn't have the same type of nervous feeling inside. Sure, I'd probably be nervous auditioning anywhere, but going to Carolina Crown is something completely different for me. Two years ago I set out on the journey to find my "drum corps home." I think that because my dream since my first viewing of drum corps was to march with Carolina Crown, I've never been able to let myself be anywhere else without the thought of Crown in the back of my mind. This is of course in no way a lack of respect or anything for any other corps; it's just a dream that I have always had and always will until I try. Everyone I know has that one corps they love. That one corps that they fell in love with from the moment they first saw them on the field. Like me, sometimes people think they are not good enough for the greatness that is his or her "dream corps," while never even trying out to see if they stand a chance. I've done that for two years now, and that is two too many. Every dream deserves a chance and this year I'm going to follow through. I've never been more scared of anything in my life, but if I wasn't afraid I don't think it would truly be my dream. As the weekend of truth slowly approaches, I'll do everything I can to prepare myself. I've already been asked by several people what I intend to do if I don't make it. All I know right now is that even though I've never been more nervous, I don't have a backup plan. I'm taking things one-step at a time and I'll see where that gets me. To anyone reading that may be following through on your own dream, best of luck to you. I'd love to offer you some sort of support in pursuing your dreams, because that's what I'm doing and I know it isn't easy. One of the best pieces of advice I've received is to believe in myself. If I don't believe in myself, why should anyone else? I don't have any real of words of wisdom to pass along, because I'm on the very same journey myself. So it will be interesting to see where this journey leads. Until next time I'll leave you with an inspirational quote that has been passed on to me: "The reason most people never reach their goals is that they don't define them, or ever seriously consider them as believable or achievable. Winners can tell you where they are going, what they plan to do along the way, and who will be sharing the adventure with them." Allison Owen, 17, is a senior at Sullivan Central High School in Blountville, Tenn. She was assistant conductor at Southwind, and she enjoys dancing, performing, color guard, writing, English, and having fun. She plans on attending Western Carolina University next fall...