Each weekday before the DCI 2005 Classic Countdown, we'll be running first-person accounts of the seasons and the shows that will be featured in that event. Here's the 11th installment: By Jim Elvord I have been asked on many of occasions to describe the 1975 Madison Scouts. How was that corps crafted? Who were the principal characters in the corps and on the staff? Well, the way I like to best describe the '75 Scouts is that this was a people's corps riding in a big car. The '75 edition was the second Madison Scout corps with large numbers of its marching members and staff from places other than Madison, Wis. Because of this fact, the finished product resembled a modified, wide-body 1966 Cadillac Eldorado Biarritz Convertible. While the components were from different places, fully assembled, it was truly Madison! Imagine the huge Cadillac body representing the massive size of the corps. 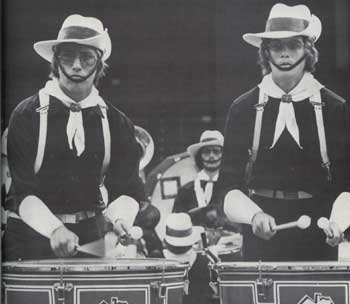 The Madison Scouts in 1975.
'75 was a physically intimidating corps made of men who all looked like they were just out of triathlon training. The drum line represented the contoured front-end, with large, in-your-face headlights. This was the first Madison percussion section to register high 18s and 19s for section scores. Fearlessly competitive, the drums more than held their own in every show. Plus they had arguably the top snareline and mallet sections on the field that year. The color guard was the coach (body) of the corps. They were the colors that showcased every move and sound produced by the corps. The color guard was always technically splendid in its workmanship, at times bordering on being aristocrats, as they bowed at the end of the show. The heart and soul of the '75ers was the hornline. The brass section was like a 440 cubic inch, 440 bhp, 500-ft torque hemi engine. The section had twin Holley 850 carburetors, high-rise Adelebach manifold, with Mickey Thompson valve covers and headers. Power to burn was the phrase of the day. This massive vehicle (the members) carried a staff second to none. The staff consisted of Bill Howard as director, Ray Baumgardt as musical arranger, Craig Aswegan and Tom MacInvalle on the brass staff, Bruce Lages as percussion arranger, Mike Madigan and Lyle Siggelkow as head drum staff, David St. Angel as drill designer, Paul Litteau, Joe Miller, Phinis Horton, Charlie Maas, Rick Elvord, Karson Klund, and Frank Godfrey as drill staffers, with Bob Wenderski as special "free spirit" drill consultant. Jeff Knupp served as head color instructor, Sal Salas and John Michaelson were chief guard designers and I was the show coordinator and a brass staffer. The amazing thing about '75 Madison is that the staff knew this corps would produce the next generation of leaders in the activity. They were unbelievable hard workers who took all we could give and more. The corps had that magical ability to "self-clean." When a concept was taught and it applied elsewhere in the show, the members automatically adjusted the problem area and made the correction. Few corps have that option in today's corps. In addition, the corps was first to combine tremendous ensemble performance with "over-the-top" spectacular solo performance. Each section had superstars that, night in and night out, gave the crowd something by way of a memory to take home in a "brown bag." I can still remember the sounds coming from the show audiences as the corps took that first breath to kick off "Slaughter on Tenth Avenue." The fans in the stands seem to move a few feet toward the corps, to only be blown back into their seats as if hit by something supernatural. The corps seemed to thrive on owning big shows. This corps had the ability to transcend what ever occurred in rehearsal and be something new and very special for the audience every night. Because of this ability, the audience response was like that given to a rock band. Given all the different sources of DNA that made up the '75 Scouts, this truly was the people's corps. I would like to close with the '75 Madison tag: "You don't tug on Superman's cape."
"You don't touch the Lone Ranger's mask".
"You don't spit into the wind."
"You don't French kiss a rattle snake."
"You don't take off Dorothy's ruby red slippers."
"And you don't mess around with the Mighty Madison Green Gods!"
"AMEN." Seat back and enjoy the Cadillac show of shows! Madison Scouts, 1975.