Let me start off with introducing myself. My name is Martin Verkamman. I'm 28 and from Den Helder, Holland. I am a member of the Beatrix drum and bugle corps. Maybe you have heard about us -- we took a couple of trips to the United States to compete in DCI. The last time we were over was back in 2000. Beatrix will come over for another U.S. tour in 2004.

So what is Beatrix? 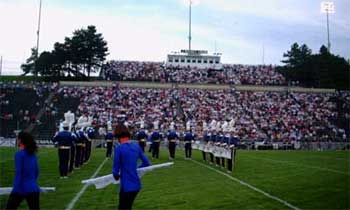 Beatrix performs in Allentown, Pa., in 2000.
In 1946, just after World War II, the Hilversumse Christelijke Jonge Mannen Vereniging (a Christian youth organization) started a drum and pipe band. Before the war there was a harmonica association called Excelsior, founded in 1929, but during the war they had to stop. After the war they became the Beatrix drum and pipe band. A drum and pipe band consists mainly of percussion and flutes with some horns (with no valves). The uniform was a white shirt and an orange tie. The pants were black. They wore no hats or caps. In 1956 there was a lot of interest amongst very young children towards Beatrix, so a youth band was founded. They were (and are) called Jong Beatrix. The intention was that the young people could automatically go to the "big sister" drum corps. In the meantime, a new band was formed especially for members who just left the military service. That band was called Jachthoornkorps Hilversum. Only signal horns were used (again, without valves). Flutes were no part of it. To avoid competition within other groups, the decision was made to transform the drum and pipe band Beatrix into what was called a "Drum fanfare." Three-valve instruments were bought for the group's use, but flutes remained in the ensemble. A big step forward was achieved when the then-famous composer and conductor Pi Scheffer was prepared to write the music for this new setting. It was a big success. Later on, Co van der Kolk took over the musical responsibility and since then the Beatrix band has taken part in lots of contests. The Beatrix band became the Dutch National Champion in 1974,1978 and 1981 at the Wereld Muziek Concours in Kerkrade. They became well-known in The Netherlands and the rest of the world. In 1979 the Beatrix Band was invited to participate in exhibition at Drum Corps International World Championships. The influence of that trip caused a big change -- the decision was made to transform the Beatrix Band into the Beatrix drum and bugle corps. A special G-tuned set of instruments was purchased and Beatrix did very spectacular shows. This change was followed by the formation of more corps in Holland and the formation of a Dutch organization -- Drum Corps Holland. The organization changed a lot over the years, and today, several people are responsible to make a good product and to keep the level of music and show very high. Three times the decision was made to participate in the American competition (in 1988, 1991 and 2000). These tours were a fantastic experience and made the corps improve more and more. Beatrix became the Dutch Champion more than 14 times.

At this time Beatrix is holding auditions to fill in the last open spots in all the captions. This year, more than ever, there are a lot of people in Holland who want to march and experience what DCI is all about. I hope throughout the pieces I write you will have a better understanding of what Beatrix is all about. Maybe you will see us during a show and think, "Hey, those are they guys from Holland!" and cheer us on more. Maybe you'll also understand what a small corps from Hilversum, the Netherlands, can be all about.