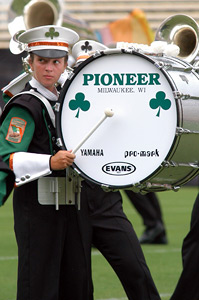 2003 Pioneer
We've still got a few weeks to go before the trees in much of "drum corps land" turn green, but today, we celebrate the green with our Irish brothers and sisters during St. Patrick's Day, when everyone and everything is Irish for a day. Other than the Pioneer who has delivered on the Irish theme for many years, there just hasn't been that much Irish music played on the football field over the past several years. There was more in earlier days, particularly in DCI's inaugural year of 1972, though that may leave you asking, 'Where have all the leprechauns gone?' Like the exact location of the pot of gold at the end of the rainbow, we may never know, but we can look back through Drum Corps International's yester-years to discover some "green" treasures that'll help us celebrate this special day. We start with the 1972 Blue Stars and "Green Leaves of Summer." Okay, the piece has nothing to do with Irish music, but it's green. And today, anything that is green is Irish; so enjoy this piece from DCI's first season. The same year, the 27th Lancers played a number of Irish tunes; including "Wee MacGregor," "Garry Owen" and "Danny Boy," the latter performed in a number of the corps' programs in subsequent years. And also in 1972, the Kilties played "MacLennan's Reel." Since a reel can be either Scottish or Irish, today, for the sake of the day, it's Irish. If we jump ahead 11 years, we can get a glimpse of "Jade," the opening tune composed by yours truly for the Cavaliers' 35th (jade) anniversary. While the work is Spanish in character, the title is reflective of the corps' kelly green uniforms and is hereby declared Irish for this day only – even if I have to state my case before General Mills' Lucky the Leprechaun to make it so. So while you're relaxing and slugging down your third McDonald's Shamrock Shake of the day, be sure to head over to the DCI Fan Network, and download some of these "green" hits from the past: 1972 Blue Stars "Green Leaves of Summer" Dmitri Tiomkin, P.F. Webster 1972 27th Lancers "Wee Mac Gregor," "Garry Owen," "Danny Boy" Traditional 1972 Kilties "MacLennan's Reel" Traditional 1995 Carolina Crown "Watermark" Enya 1983 Cavaliers "Jade" Michael Boo 1990s and beyond, Pioneer With productions just in the last five years titled "Celtic Reflections," "Fields of Green," "Emeraldscapes," "This Place Called Ireland," and "Return to Ireland," along with classics like 1997's "Riverdance" and 1998's "Irish in Your Face," no one has channeled the luck o' the Irish more than Milwaukee's own. Explore many of these programs and more on the DCI Fan Network.

When not admiring himself in the mirror donning his kelly green best for St. Patrick's Day, Michael O'Boo serves as a staff writer for various Drum Corps International publications. As a former member of the Cavaliers from 1975-1977, he has written about the drum corps activity for more than a quarter century. Additionally an accomplished composer, Boo holds degrees in music education, theory and composition, and currently resides in Chesterton, Ind.