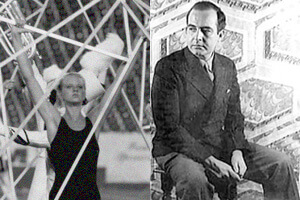 Today, March 9, is the 101st anniversary of the birth of Samuel Barber, one of the most introspective and contemplative American composers whose soul-searching works have become drum corps classics. Barber's music is profoundly emotional and is justly considered by many to be unabashedly cerebral. His melodies often catch you off guard by taking leaps of interval that at first seem unnatural, but then become seared into the consciousness; such an example is the soaring, elegiac melody of his "Symphony No. 1" as heard in Santa Clara Vanguard's 1999 production, which also featured a segment from his "Symphony No. 2." Among notable finalist performances over the years, is the Cavaliers' 1991 interpretation of the "Silent Night" motif from "Die Natali," Barber's only work to feature non-original material. No corps fans that witnessed this selection will ever forget the hovering beauty of the long silver windsocks that color guard members floated through the air as if they were suspended by invisible wires hanging down from the clouds. Two years later, Star of Indiana—in its last year on the field before being transformed into "Brass Theatre" and later, "Blast!"—shocked the drum corps community with an unapologetic setting of Barber's violently cataclysmic "Medea," saturated with a foreboding sense of palpable angst that intentionally made some fans want to run to the top of the stadium and jump off. Barber's famed "Overture" to "School for Scandal" is part of the shows of the 1995 Crossmen and this past season's offering by the Cadets. The Crossmen performance is especially intriguing because it was such a departure for the corps from the jazz programs for which they had become known. Blue Knights have long been fond of the music of Barber. In 1997, the corps featured his "Lithe Girl, Brown Girl" chorale and his meditative "Prayers of Kierkegaard," a work that would be featured three years later by Santa Clara Vanguard in its production, "The Age of Reverence." The Blue Knights also took a look at one of Barber's more challenging works for listeners, his explosive "Concerto for Piano and Orchestra," performed in 2002 and 2006. Barber's music is among selections being performed in this year's Santa Clara Vanguard show, "The Devil's Staircase." In 2000, SCV brought to the field the composer's most famous work, "Adagio for Strings." The corps' arrangement, however, was titled "Agnus Dei," the same title Barber gave his setting of the work when he later arranged it for vocal ensemble.
2000 Santa Clara Vanguard

The "Adagio" forever etched Barber's name in musical stone in 1938 at the age of 28, when he introduced the work for multiple-part string ensemble, based on a movement of his earlier "String Quartet." The profound angst and sense of loss provided a perfect complement for Oliver Stone's "Platoon," the Academy Award-winning Best Picture of 1986 that brought the work to a new generation of listeners. The work reached the bulk of the American populace in 1945 when it was broadcast simultaneously on multiple American radio networks upon the announcement of the death of President Franklin Delano Roosevelt in 1945. So powerful was its international reach, it was also performed at the funerals of Albert Einstein and Princess Grace of Monaco. At its Soviet Union premiere, at a time in the Cold War when American music was all but forbidden, the audience reacted with such stunning acclamation that the work had to be performed a second time. This was an honor practically unheard of, even for Soviet composers.