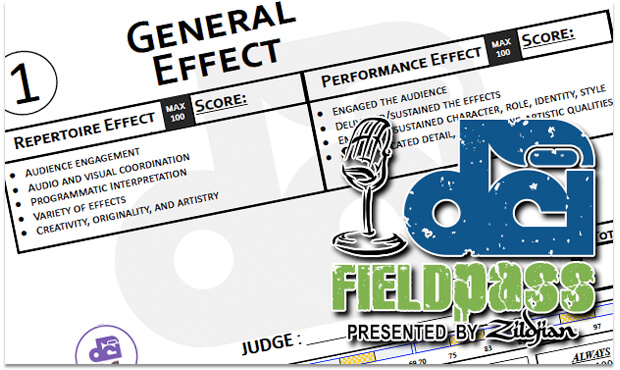 It's just a small change on paper, but results in an evolution in the way that drum corps will be judged in 2014.

Last week via teleconference, Drum Corps International's member corps voted to approve a change in wording on the General Effect (GE) judging sheets. The update will allow music and visual GE adjudicators to judge in a way which more closely resembles how audience members view a corps' production—as a total package.

Starting in 2014, GE judges will be permitted to cross-comment on aspects of the performances they're evaluating which are not within their assigned caption. Music General Effect judges who are moved not just by the music, but also by the way a corps' visual program enhances the music's effect and visa versa, can now comment on the visual impact too, while awarding points as they deem appropriate.

"We all know that there's something that only the corps of Drum Corps International deliver … this magical moment, or two or three in a show that are beyond explanation," DCI Artistic Director Michael Cesario explained. "We know that sometimes [those moments] happen in the break between two captions … It's that magic moment when our fans are driven to stand up. They don't know why they're standing up, but they're just standing up and screaming or crying or responding to this super sensitive moment. You find that when you box the judges in, we were limiting the judge to be unable to experience the performance the same way that the audience gets it, which is as a whole."

Under the new change, Cesario says that between the two GE judges, one will still have a visual expertise and visual background, while the other will still have a musical background and focus. "But we're not going to stop them from talking about those moments when [a performance] is coming together brilliantly," he said. "Whatever you want to call that, unity, coordination … I just call it when a show is compelling. We want to make sure that the GE judges aren't missing it."

Cesario says that this General Effect evolution is one that has been in the works for more than a year and is the "next logical step" in an adjudication system which itself is continually evaluated and refined to changing standards and to the way that the participating drum corps want to be judged.

Dan Potter, host of Drum Corps International's "Field Pass" podcast, had the opportunity to talk with Cesario following last week's vote to learn more about the change and how that will affect this coming summer's competitions.

How the revised General Effect judging sheet looks on paper