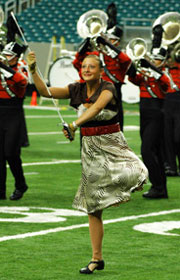 Boston Crusaders won the afternoon
competition in Atlanta, Ga.
11 Drum corps took the field this afternoon at the Georgia Dome in Atlanta for the first half of the Coltrin & Associates DCI Southeastern Championship. Boston Crusaders (79.950), Colts (78.625), Glassmen (77.375) and Spirit from Jacksonville State University (75.550) had the four highest scores of the afternoon, and will advance to the evening show where they will compete against the eight corps determined from the competitive outcome of the DCI Eastern Classic in Allentown, Pa. last weekend. Also performing at the afternoon's competition were Blue Stars (75.200), Madison Scouts (73.150), Crossmen (73.075), Southwind (71.350), Cascades (70.675), Troopers (70.300) and Pioneer (66.075). The evening portion of the Coltrin & Associates DCI Southeastern Championship will begin at 7 p.m. Eastern time, and will feature the current top 12 Division I drum corps of the 2007 Summer Music Games. View the complete scoring recap.