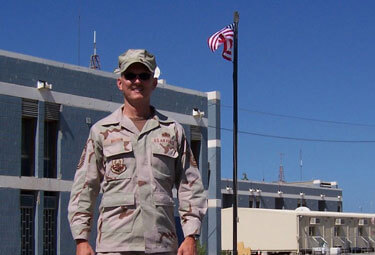 Cheif Master Sergeant Royce Wayne Barron
The American flag carried was presented to DCI by Chief Master Sergeant Royce Wayne Barron of the United States Air Force. As part of Operation Iraqi Freedom, this flag was flown at Camp Patriot, Kuwait Naval Base, this July in honor of Drum Corps International. Chief Master Sergeant Barron's Air Force team has been deployed to Camp Patriot in Kuwait since January 14. He is an avid drum corps supporter, touring as a volunteer with various different corps since 1991. Barron wrote in am accompanying letter: "Our Air Force team that is deployed to Camp Patriot here in Kuwait has been gone from our families since Jan. 14. We are scheduled to depart from here Aug. 19, one week after Finals. I wish we were leaving 10 days early, but that's just how it is. Believe it or not, I found DCI fans here at the camp. We check scores every morning,"