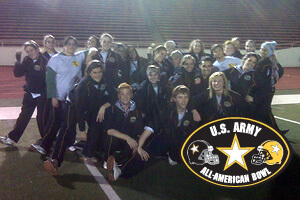 Members of the 2010 All-DCI Color Guard
The 24 members of the 2010 All-DCI Color Guard will be in action this Saturday, Jan. 9, performing as part of the halftime show for the U.S. Army All-American Bowl at the San Antonio Alamodome. The standout members, who were chosen specifically for their participation in Drum Corps International units, will complement the U.S. Army All-American Marching Band (USAAAMB), a group spearheaded by the National Association for Music Education (MENC) and New Jersey-based sports marketing company SportsLink. "The most exciting thing for me about the event is having the opportunity to bring together the best high school marching musicians in the country with an all-star staff," said Nola Jones, director of the USAAAMB. "It should be a 'dream team' experience for all of us. Now that the USAAAMB is in its third year, applications are up, and the quality of the band is better than ever." In addition to her work with this ensemble, Jones serves as director of bands at the University of Tennessee Martin and as an adjudicator on the annual Drum Corps International Tour. Along with the 97-member band, color guard members were flown into San Antonio on Tuesday, Jan. 5 to begin rehearsals. In only a matter of days, the marching ensemble has been learning and perfecting a six-minute production for the halftime show. The group's 2010 performance will be western themed featuring musical arrangements by DCI Hall of Fame member Jay Kennedy including Aaron Copland's "Hoedown" and John Cougar Mellencamp's "R.O.C.K. in the USA." The U.S. Army All-American Bowl will be broadcast Saturday on NBC at noon CT. All pre-game, halftime and post-game festivities, including the performance of the USAAAMB, can be seen during a live Webcast at AllAmericanGames.tv beginning at 11 a.m. CT. Learn more about the USAAMB and All-DCI Color Guard at MENC.org. Watch live and behind-the-scenes coverage of the All-American Bowl at AllAmericanGames.tv.