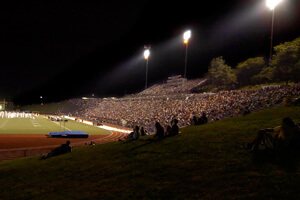 J. Birney Crum Stadium
First held at what is now known as J. Birney Crum Stadium in Allentown, Pa. back in 1977, the DCI Eastern Classic is one of Drum Corps International's longest standing events. Over more than 30 years, the two-night show known to most fans as "DCI East" or even more simply "Allentown," has become a must-see event for the bucket lists of corps fans around the world. An easy drive from New York City, Philadelphia and the all-age corps hotbeds within Pennsylvania, Allentown is more than just another drum corps show; it's a pilgrimage and a right of passage for corps members and fans alike. The stadium, renovated a handful of years ago, is one of the only sites we still attend that can be effectively labeled as a drum corps "shrine." Two-night ticket packages for the 2012 Eastern Classic will go on sale this Thursday, Oct. 13, which may leave you wondering with all the hype, "What's the big deal? Why should I go to Allentown?" Well, the obvious answer is for the corps. Allentown is the final Premier Event prior to the DCI World Championships that is host to all 23 of DCI's World Class corps. It's also annually one of the only events prior to the World Championships that is held over more than one day. But beyond the competition, you'll quickly learn there's so much more to the Allentown experience. 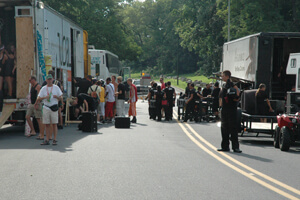 Linden Street
Out front of the stadium, Linden Street becomes the activity's longest corps parking lot as the buses, equipment trucks and food trucks line up on both sides of the two-lane street next to the sidewalks. Walking down the street before and after each night's contest, one gets up close and personal with the corps members unlike anywhere else. You can smell the diesel fumes and see exactly how the members dine off their food trucks, and you can walk down the street after the shows and thank the members for their energy and performances. Few places offer this level of fan interaction with the corps personnel. It's like attending a parade, except the corps remain in one location and the fans move down the street.

The outdoor atmosphere within the stadium confines takes on an almost carnival-like feel with food vendors at the top and bottom of the stands. 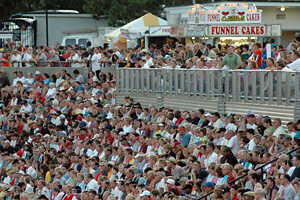 Food Vendors at the top of J. Birney Crum Stadium.
Snow cones come in dozens of flavors, with combinations of flavors greater than your imagination, available in a large size that would give an elephant brain freeze. This may not sound like a big deal, but it is. Seeing fans walk around with these monstrosities in a myriad of colors is like entering the psychedelic light show at the end of "2001: A Space Odyssey." Oh, and pierogie…lots and lots of pierogie — those delicious little Polish dumplings. Don't let anybody outside of Allentown tell you that no one puts vinegar on their pierogies, because at the stadium, you can do so and no one will look at you as if you've stepped off a UFO. And oops, did I almost forget to mention funnel cakes? Those delectable fried creations with powdered sugar on top never taste better with the sounds of drum corps wafting through the August air.

Stocking up on Souvenirs

No matter whether a corps is performing on Friday or Saturday night, their corps' souvenir booths are all set up for both nights of competition. It's one-stop souvie shopping in a true festival atmosphere — a place to find all of your drum corps treasures. 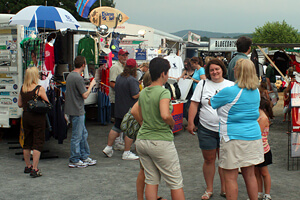 The Allentown marketplace
And for those who don't get much exercise, hiking up the hill to the souvie area at the top of the stands is considered great heart healthy aerobic exercise that will help prolong your life!

Just a block south of J. Birney is the Hamilton Family Restaurant, a classic Pennsylvania diner that well prepared for the throngs of corps fans coming through its doors. Behind the diner is a veritable city of tailgate parties unlike any witnessed at other drum corps events. If you've never partaken of one of these get-togethers, just introduce yourself and you'll be made to feel right at home. Or, you may choose to picnic at Muhlenberg Lake, less than a block away and next to the corps vehicle parking on Linden Street. The wooded parkland around the lake is also the best spot to listen to corps warm up and do stationary run-throughs of their music. 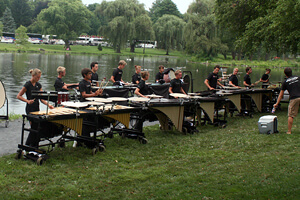 Warming up on Muhlenberg Lake
Since the shows don't start until early evening, you have plenty of time to do some sightseeing, and there are plenty of interesting venues in the area. Here are a few worth considering: Dorney Park & Wildwater Kingdom is only 2.5 miles west of the stadium. The park has some of the world's best-known rollercoasters, including Steel Force, the longest on the east coast and the ninth longest in the world. The water park is a popular place to cool off on a hot summer day. DorneyPark.com If your tastes run a little more cultural, the Allentown Art Museum, 2.5 miles east of the stadium and right downtown, is home to a living room from a Minnesota Frank Lloyd Wright house that was built in 1912. AllentownArtMuseum.org The Martin Guitar Co. offers a most fascinating tour of their factory, just 18 miles northeast of the stadium. Tours are free and require prior reservations. Whether or not you play the guitar is irrelevant; the tour is as riveting as it is educational. MartinGuitar.com 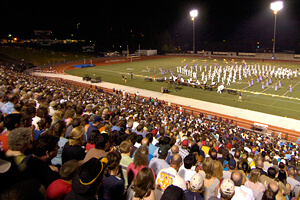 From the stands in J. Birney Crum
If you still have room in your body for some live music, head eight miles east of the stadium to Musikfest in Bethlehem, a massive open air, multi-venue festival in Bethlehem's historic and charming Moravian-inspired architectural downtown. This event, one of the largest of its kind, is always the same weekend as the DCI Eastern Classic and is a good way of killing time prior to the shows. Fest.org Also always on the same weekend and the same distance to the west is Das Awkscht Fescht in Macungie Memorial Park. This is one of the largest car shows in America. Friday will witness around 600 custom and modified cars, Saturday features a classic and sports car show of more than 1,200 cars (arranged by make and model), and Sunday hosts more than 1,000 vintage vehicles. Awkscht.com

See You at the Stadium!

So, no matter what your tastes, the Allentown area has plenty to offer to individuals and families, outside of the two late-season drum corps shows that are legendary among corps fans. But, granted, nothing can match the intensity and drama of the final DCI Premier Event prior to the World Championships. If you haven't been to Allentown, discover it for the first time. If you've have been there, but not for a few years, discover Allentown all over again. And, if you can take a hint, my personal favorite snow cone flavor is root beer! Learn more about the 2012 DCI Eastern Classic.