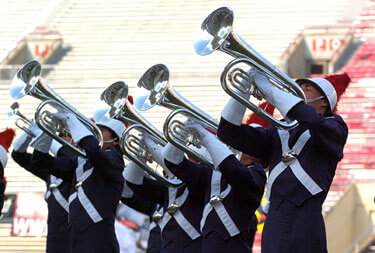 Blue Stars at the 2006 DCI World Championships in Madison, Wis.
Hardin and Anderson have extensive backgrounds working with the visual programs of many marching bands and drum corps. Hardin most recently served as the visual caption head of Santa Clara Vanguard. "The leadership and creativity of Ron and Mike will pay immediate dividends to our visual program. Our members, alumni and fans are sure to appreciate the outstanding energy and experience that these gentlemen bring to the Blue Stars," said Blue Stars Corps Director Chad Armbruster.

Learn more about Hardin and Anderson at www.bluestars.org