A mix of more than 50 corps alums and die-hard fans, along with band students, arts enthusiasts and Indy residents from neighboring businesses stopped in to say hello to Drum Corps International staff members at an open house Friday morning and afternoon at the DCI corporate headquarters in downtown Indy.

The organization's Washington Street facility has served as the central hub of operations for Drum Corps International since relocating from temporary quarters earlier this year.

Office visitors had the opportunity to roam through the office, visit with members of the DCI staff, and were able to pose for photos with the venerable Drum Corps International Champions Trophy. 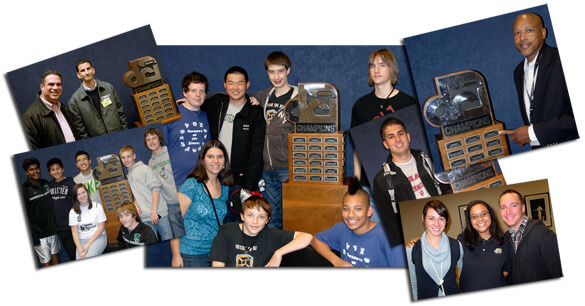 One group included 17-year-old Alex Bidolli and his friends (pictured center) from a north suburban Detroit high school visiting the Circle City for the Bands of America Grand National Championships. As a member of the Legends Drum and Bugle Corps in 2009, the first-time visit to the DCI office for Bidolli was eye-opening.

"I didn't realize that that there was this whole business side to DCI. I know it's a huge organization and everything, but it was interesting to see the inner workings of the office and what goes on behind the scenes."

Bidolli said his favorite part of the tour was a visit with DCI Executive Director Dan Acheson and looking at the drum corps memorabilia on display, including a shako hat from the uniform of the very first DCI World Champions, the 1972 Anaheim Kingsmen.

After his experience in 2009 with Legends, Bidolli is already looking forward to next season when he can return to Indianapolis to perform with the corps at the DCI World Championships, Aug. 12-14, 2010.

"I like marching in a drum corps. I knew the experience was going to be good before I first joined, but once I actually started it was mind-blowing."