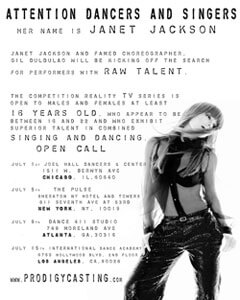 The multifaceted ranks of Drum Corps International corps have their fair share of members who can dance their way across the football field stage with the vocals to back it up; and those corps members and others may now have their chance at stardom as one of the biggest pop icons in the world is conducting a nationwide search for the next undiscovered prodigy talent.

Janet Jackson and famed choreographer, Gil Duldulao, in association with 25/7 productions and Wright Crear Management have kicked off the search for performers with raw ability, looking to offer the chance of a lifetime to one rising talent to become Jackson's prot?©g?©, and launching the next legendary career in singing and dancing.

The competition reality TV series is open to males and females at least 16 years old, who appear to be between 16 and 22 and who exhibit superior talent in combined singing and dancing. Those who are eligible are encouraged to apply and attend the nearest open casting call, coming up in Atlanta on July 9 and Los Angeles on July 15.

Check out ProdigyCasting.com for more information on open castings and updates.