Over the last several months, Drum Corps International Judge Administrator John Phillips has taken multiple trips to South America where he had the opportunity to observe groups who participate in one of Colombia's foremost organizations of marching music groups, "Bandbetter." While presenting a series of educational clinics to judges, instructors and performers, Phillips gained a unique perspective, witnessing the far-reaching effects of the commitment to excellence shared by Drum Corps International and its member units. 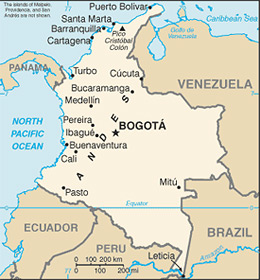 I am sure that many Drum Corps International fans know that drum corps exist beyond the North American continent, but do you know how far afield the world of pageantry exists? Some of the most interesting and enriching experiences for me as a DCI judge have included travel to other countries. I have been fortunate to journey to the United Kingdom, the Netherlands, France, Jamaica, Japan, and most recently Colombia to present educational clinics and to judge. In each country, I have found that the participants (members, directors, instructors) are absolutely mad about Drum Corps International. They love the excellence, showmanship and entertainment that our corps project every time they take the stage. My latest trip, to Colombia, was a revelation of the similarities and differences in the world of the marching arts. While many miles separate us, there are commonalities that exist in both communities. The general nature of competition and aspiration for excellence is very similar. The Colombian culture and lifestyle are stark contrasts to our North American way of life. Regardless, the Colombians perform with intensity, involvement and communicate at a level that is parallel to what we experience within DCI. My connection to Latin America began with a request for support from the director of "Bandbetter Colombia" (BandbetterColombia.com), Senor Manuel Buitrago Conde. Senor Buitrago is a former physical education teacher at George Washington High School in Cartagena which is on the northern coast of Colombia. He is passionate about marching bands/drum corps and the many opportunities they provide to Colombian youth. While not as critical a social liberator as the South African Field Band Foundation (FieldBand.org.za), Bandbetter aspires to bring marching bands and drum corps from across Colombia together. From my rough calculations, I would estimate there are more than 200 marching music units in the country. There are five regions and the groups are mostly located in major centers such as Bogota, Medellin and of course Cartagena. Senor Buitrago sent an e-mail to Drum Corps International asking for information about adjudication. I responded and sent our judges manual, rulebook and adjudication sheets. Manuel then asked if I would be willing to meet with directors and explain our judging system. I traveled to Colombia the week after this past season's DCI World Championships and presented workshops in Bogota and Cartagena. I met with students, staff and directors, and it was a wonderful experience. We discussed ways to create a judging system modeled after the one used by DCI. Fortunately, I had a translator since my Spanish is minimal. Even still, music is a universal language and the participants were extremely patient and posed some very specific guiding questions that helped inform our day's work. 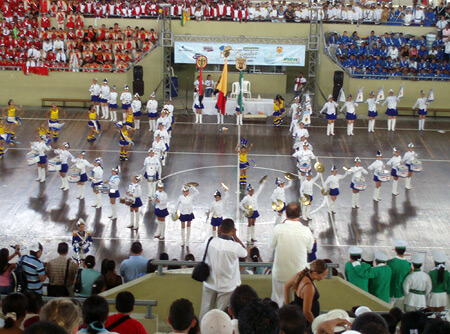 We saw videos of the Colombian performances and in regards to judging, I quickly realized the challenge would be finding a system that would meet the needs of such a diverse collection of ensembles. Some groups consist entirely of drums. Some have drums and bell lyres (just like the original Blue Devils Drum and Bell Corps). Some have drums and bugles (straight bugles and keyed bugles) resembling drum corps as we know it. In addition, some groups are marching bands with both brass and woodwinds. The color guard is not what we might be familiar with in the U.S. They are typically dance troupes that accompany or respond to the music and rarely use flags or other equipment. 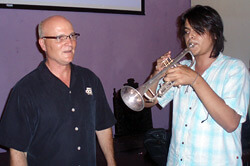 Attending the Bogota clinic was a delegation from Ecuador. Apparently, they traveled two-and-a-half days by bus to participate. They are typical of the majority of peripatetic instructors who have limited formal music training. Essentially, the majority of instructors across the country are former marching members. Some have gone on to study music at a conservatory and owe their participation in youth pageantry organizations to their musical careers. In the first educational clinic session, we worked on fundamentals of wind playing, percussion and marching. I used the student delegates to model the concepts. Later in the day, I attended a rehearsal of the Guardia Banda Fantasma from Bogota. This group has a long-standing tradition of success in the World Association of Marching Show Bands (WAMSB). I even received a medal for my contribution to music education from Educando Colombia. The next day we moved from Bogota to Cartagena and held similar sessions for the groups from that area as well as Venezuela.
A typical example of the "Showband" style as performed by Guardia Fantasma.
While they revere Drum Corps International, I strongly encouraged my new Colombian friends to maintain their cultural heritage when developing their shows. Colombia is a country rich in music and dance. The Colombian people know their native folk songs. There are street bands (called Bayonettas) that perform songs familiar to all citizens who readily jump in and sing along. Similarly, in a taxi you'll hear traditional Colombian folk music and both the driver and the passengers sing along. Basically, you cannot go into a restaurant, bar, shop or taxi and not hear Colombian music. The first annual Bandbetter Colombian Championships were held in Cartagena on the Columbus Day weekend. Forty-five groups competed in the five categories. They compete in instrument specific categories: Traditional (drums only or drums and straight bugles), Traditional Latin (use of Latin percussion instruments such as conga or timbales), Semi-Especial (includes some choreography), Especial (this category most resembles drum corps as we know it) and Showband (similar to drum corps but using woodwinds and brass). I arrived a day before the event in order to "train" the judges (jueces). Essentially, I explained to them the key was to get the groups in the correct order, then to worry about the scoring. In their judging expertise, they were looking and listening for excellence relative to the level of achievement in Colombia and not at the DCI standard. I explained that their comments should help indicate those key areas that each group could develop in preparing for future performances. This instruction was well received and at the end of the day, I believe the entire panel did a great job of ranking and rating the participants. It is interesting to note, four of my judging colleagues from Colombia had travelled some 25 hours on bus from Bogota to participate in this event. The morning after the show, they boarded the bus for a return 25-hour trip home. 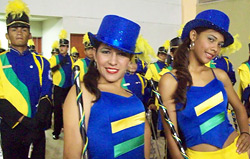 The photographs from the summer clinic and fall event tell the whole story. The colorful costumes and uniforms speak to the pride that these young people take in their accomplishments. The instruments are certainly an area where they could use most help. The drums are in need of new heads and many of the bugles have seen better days. Some of the drums I saw had a permanent metal head attached to the bottom of the drum. That said, they make the most of what they have to perform with. View a photo gallery from Phillips' trips to Colombia. I have been asked by friends and family about my safety while visiting Colombia. I did see a number of armed guards, police and security, even on the beach. However, I always traveled in the company of an escort and felt safe. The only danger I ever felt was during one of the many taxi rides I took. There appear to be no rules of the road. Stop signs are arbitrary indicators. Lanes are non-existent and speed is basically as fast as you can go without hitting anyone. Pedestrians have to yield for vehicles. Since returning to North America, I have been invited to two other events in 2009. These are not sponsored by Bandbetter, rather by other foundations that are hoping to support youth programs in their part of the country. For a country that has both moderate prosperity and abject poverty, the efforts of the dedicated men and women who provide opportunities through participation in pageantry speaks to the character, compassion and concern they have for their young people.

John Phillips has served as the Drum Corps International Judge Administrator since 2000. Beginning his DCI judging tenure in 1976, he also has served as brass caption chair and as a member of the DCI Task Force on Adjudication. Outside of his marching arts affiliations, Phillips is responsible for the Arts Curriculum for the province of Ontario, Canada. He teaches undergraduate music education courses at the University of Toronto and York University where he is completing his PhD in Music Education. Phillips is frequently in demand as an adjudicator, clinician and guest conductor across North America, Europe and Japan.