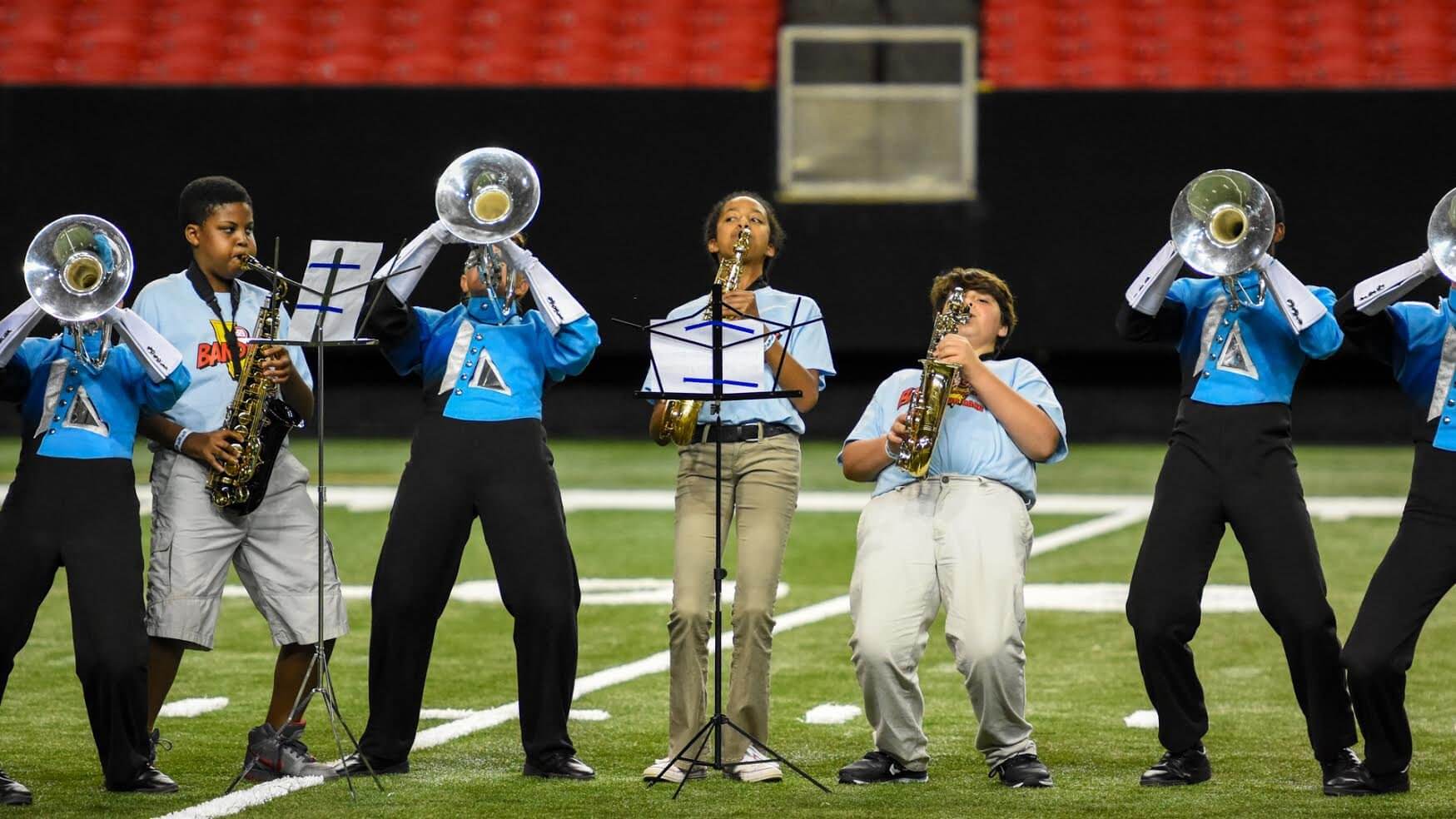 BANDtastic! students feel the music on the field of the Georgia Dome with Spirit of Atlanta.Photo by: Drum Corps International
It was a “BANDtastic” evening last Saturday in Atlanta when students from two local middle schools took the field alongside Spirit of Atlanta to play their hearts out in support of music education. Presented that evening in its inaugural year, the BANDtastic Georgia Honor Band is one of the newest branches of the original INpact Indiana’s Future Band annually spearheaded by Drum Corps International in conjunction with the DCI World Championships. These programs, along with soon-to-be-founded Tennessee, Texas and Florida outlets, exist to encourage middle schoolers to continue their involvement in music programs in high school and beyond.On Saturday at the DCI Southeastern Championship presented by Lone Star Percussion, registered students spent the day rehearsing, exploring behind-the-scenes in the Georgia Dome, and getting up-close and personal with corps members.“Letting [the students] see drum corps, taking them up to the observation decks, letting them watch drum corps from there, they’re totally sold on it,” said Kat Johnson, band director at Garrett Middle School in Austell, Georgia. “They’re just amazed how incredible these performers are and asking questions and learning more about the drum corps activity.”

Johnson’s students had the opportunity to learn to play with fellow students directed by Stacie Long at Long County Middle School (Ludowici, Georgia), and receive instruction and encouragement from Indianapolis-area band director Katy Briel who heads the BANDtastic program for Drum Corps International. Throughout the day, in addition to rehearsal, students took part in a leadership workshop by motivational speaker Fran Kick, spent one-on-one time with members of Spirit of Atlanta, and got to perform on the field in front of thousands of spectators at the conclusion of the Southeastern Championship at the Georgia Dome.“I’ve already heard ‘I can’t wait to do this again next year’ and ‘Oh, I’m definitely doing this’ or ‘This is so cool’ ... It’s been great comments like that [from my students],” Johnson said.DCI Events and Meetings Coordinator Chelsea Brokema, who played a large part in organizing the BANDtastic program this year, explained you don’t have to be the “best of the best” to join one of the ensembles.“Band directors nominate their students based on whatever criteria they feel is most meaningful. It’s not necessarily performance-based ... You don’t have to send your best kid,” she said. “You can send your students who just really love band, or you can send the student who’s kind of on the fence saying ‘I don’t know if I’m going to stick with band next year.’” 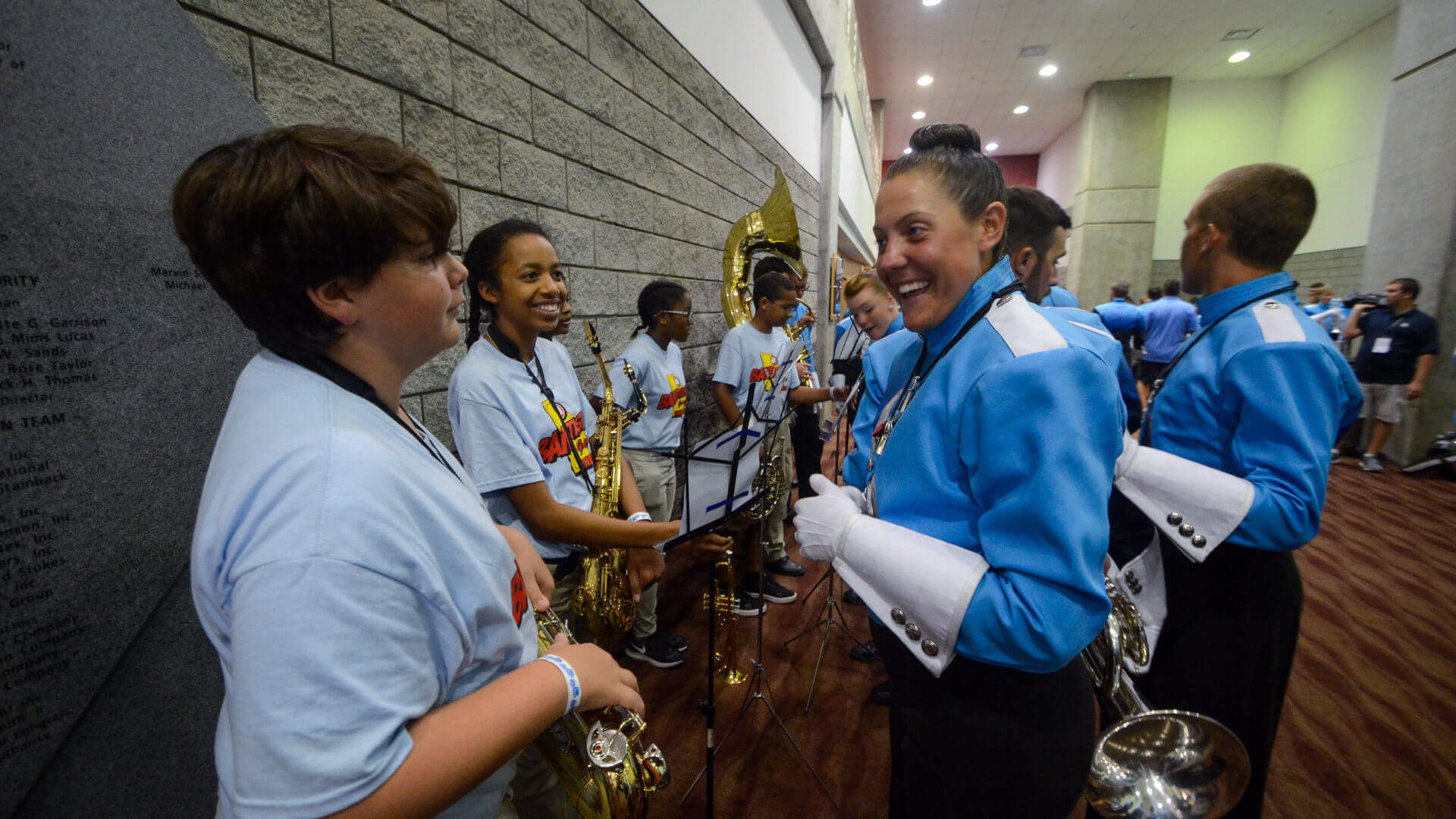 Members of Spirit of Atlanta performed with the BANDtastic students and offered encouraging advice.

While most large band programs target high school students, BANDtastic plants a seed of excitement right off the bat. By meeting other students in band programs like their own in the hustle and bustle of the drum corps world, students can see first-hand the potential their future in music has.“It’s a blast,” Brokema said. “It’s a no-pressure zone. We want students to experience it, have fun, and realize that this is actually a thing you can do in your future. Music is so important for hundreds of reasons, but these students might not know that yet, so we’re trying to get them involved and their parents as well.”The BANDtastic organizers are working hard to make connections in each state to expand each new program to the size, scale, and success of the five-year-old INpact Indiana’s Future Band. The Indiana ensemble will include more than 450 middle schoolers this year as they gather for two days of workshops and performances in conjunction with the DCI World Championships next week at Lucas Oil Stadium in downtown Indianapolis. Students interested in joining the INpact Indiana’s Future Band, or BANDtastic Honor Bands in Georgia, Tennessee, Texas, or Florida in 2017 can contact bandtastic@dci.org for additional information.