More than 300 attendees, including corps directors, instructional staff members, guests and speakers will gather this coming weekend (Jan. 25-28, 2007) in downtown Atlanta, Ga., at the annual Drum Corps International winter board meetings, Tour Event Partner workshops and Hall of Fame induction luncheon. Now you can attend, too, right from the comfort of your own home! In conjunction with these special events, Drum Corps International is pleased to offer several free live broadcasts covering the weekend's activities on DCI.org. 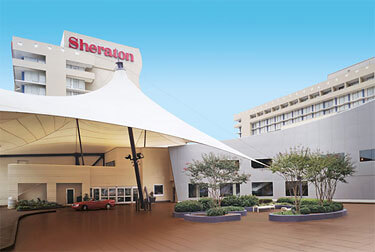 The Sheraton in downtown Atlanta will be the site
of the 2007 DCI winter meetings.
"We are excited to be able to give fans unprecedented access to the events surrounding this weekend's meetings and seminars," said Drum Corps International Communications Manager Chris Weber. "We hope that fans will enjoy this unique opportunity to be a part of the action, as the entire Drum Corps International community gathers together for this annual summit." Drum Corps International began offering live Web broadcasts of competitive events during the 2006 Summer Music Games Tour. This weekend marks the first time that the winter meetings will also be broadcast live on the Internet. 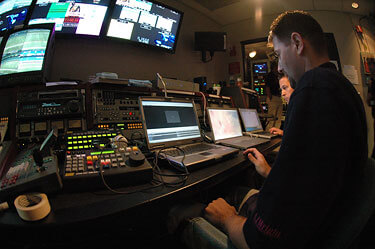 DCI's Ricky Fritzsching monitors a live major event webast from Atlanta's Georgia Dome in July, 2006.
"While featuring live Internet coverage of eight DCI major events during 2006, we were able to reach thousands of drum corps fans who may not have otherwise been able to attend those events," said Drum Corps International Senior Web Producer Ricky Fritzsching. "Our coverage of events this weekend is an excellent way for us to continue to expand our live webcast offerings. We're happy to be able to add this coverage during the off-season for fans of Drum Corps International from around the world." Veteran Drum Corps International announcer Dan Potter, who hosts DCI's Field Pass Radio and Field Pass TV segments, will also play host to several hour hour-long "Field Pass Live" programs that will wrap-up the action of each day's events this Friday, Saturday and Sunday. 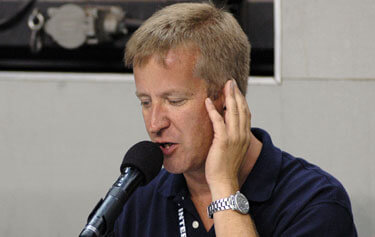 Dan Potter announces at the Alomodome in San Antonio during the 2005 season.
Also included in the live video webcast offerings will be complete coverage of the Drum Corps International Hall of Fame induction luncheon. Here, all of the 2006 inductees of the DCI Hall of Fame will be recognized by their peers for their contributions to drum corps, and viewers will be able to hear their acceptance speeches live from the Capitol Ballroom at the Sheraton Atlanta downtown.
The schedule for live webcast events, which is subject to change, is as follows: Friday, January 26
9:30 p.m. ET
Field Pass Live – "The State of Drum Corps International"

Former Spirit of Atlanta director Freddy Martin will be presented by his son Christopher Martin, principal trumpet for the Chicago Symphony Orchestra and Spirit alum.

Former director of the Anaheim Kingsmen, Donald Porter (inducted posthumously), will be presented by the first drum major of the Kingsmen, Bill Borges, and received by son Don Porter, Jr.

Long-time Cadets percussion instructor and arranger Tom Aungst will be presented by George Hopkins, director of the Cadets. 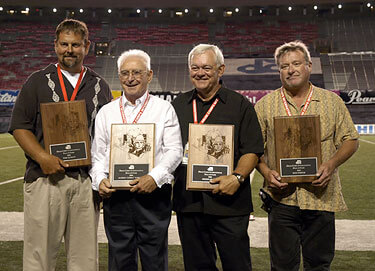 A recap all of Saturday's events hosted by Dan Potter, from the Hall of Fame induction, to the board of directors meetings, to the start of the instructor conferences, along with several special guests. Sunday, January 28
11 a.m. ET
Field Pass Live – "Post Conference Wrap-up" Dan Potter reports live from 2007 DCI rules proposal voting sessions. Find out what's going on in this live post conference wrap-up of all weekend activities. Links to these free live broadcasts will be posted just prior to each starting time on DCI.org. Schedule is subject to change.