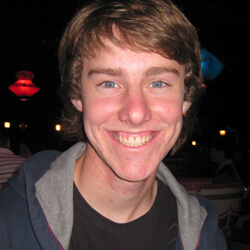 Timothy Elftman
Timothy Elftman, 20 The Ohio State University Santa Clara Vanguard Baritone, 2010 How did you choose your corps? It was a tough decision and wasn't a clear choice as I began my search last fall. I wanted a top-tier drum corps and I had narrowed my scope to the Blue Devils, Cavaliers and Santa Clara. I further narrowed it down to a West Coast corps because I wanted something closer to my home in California. I tried out for both corps last fall and was offered a spot in the 2010 horn line at Santa Clara. What was the experience like the first time you auditioned for a corps? Well, I was fairly nervous heading into the audition weekend, but then I kind of got over it as the camp/clinic started on Friday night. I felt like I had prepared well enough and I had nothing to lose. The only thing that calms nerves is preparation. I also headed into the audition ready to try anything that the staff had prepared for the rehearsal. So, I would say, be eager to learn. What's the best way to prepare for an audition? It may take only a few times to master a technique or excerpt, but through a fixed pattern I took my time and broke down each piece. I tried to master everything to the best of my ability. What would you say to someone who is unsure whether or not to audition for a drum corps? I would say go for it! This past summer was full of so many unforgettable experiences, and I wouldn't give it up for anything. Even if you are unsure of the whole process, I would recommend at least going to an audition camp because you learn about drum corps for yourself. Everyone can talk about their own drum corps experiences, but you won't know if it is for you unless you give it a try. Any other advice? Put the time in now and it will pay off when it matters the most. Learn more about corps audition dates, locations and additional info.