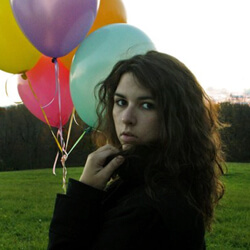 Sara Rogers
Sara Rogers, 21 New Hampshire Institute of Art, Photography Rochester Crusaders (all-age corps), 2007-2009, Carolina Crown, 2010, The Cadets Mellophone, 2011 What do you think is important in choosing which corps to audition for? I would probably say the worst way to choose a corps is by how they finished competitively the previous season. You should audition for a corps because you enjoy what they do musically and visually. I grew up in a drum corps family so I got to experience a little bit of a bunch of corps. When I became a member of the Cadets this past season, I didn't realize how much history was behind them. It was astonishing meeting the alumni of the corps and hearing stories about when they marched. Also, you should think about the financial commitment of traveling to camps and such. Flights can add up, but if you're willing to get past the cost, then go for it! How do you like to prepare for an audition? What I learned over the years is that you need to get your body ready physically. This past season was very tough visually and there were still times where we were out of breath. To get ready for this upcoming season, I've been running everyday, weight training and participating in yoga/Pilates classes. Usually the second day of camp is when you partake in physical training and it's definitely a "wake up call." You also have to be mentally tough. You need to be able to be prepared to learn new things that the staff members tell you in a short amount of time. Also, practice, practice, PRACTICE! You can never practice enough. What was your experience like the first time you auditioned for a corps? Even though I've been around the activity ever since I was born, I didn't see my first DCI rehearsal and show until 2007. Even though that was my first year playing mellophone, I knew I had to be a part of this activity one day. After three years with the all-age Rochester Crusaders, my friend Kayleigh (who marched with the Empire Statesmen) and I auditioned for Carolina Crown. Of course we were both nervous wrecks. There we were, two New York state marching band/DCA girls auditioning for a top five corps. During the audition, I was so nervous I couldn't play a note until I got to play on the move. If that wasn't worse enough, I ended up having an asthma attack the first day of marching. Overall, I was pretty embarrassed all weekend. What advice would you give to somebody who is nervous or unsure about auditioning? Believe me, you're not the only one nervous about auditioning! My advice is to at least go to a camp. You learn so much at the camps and seeing afterward how much you progress as a performer is just amazing. Any other tips? Even if you end up not doing well on your audition, it doesn't mean you're out of the game. Learn from your mistakes and make them better. Just go for it! Also remember it's not just a competition, you need to build relationships along the way. Learn more about corps audition dates, locations and additional info.